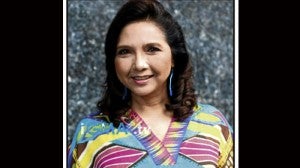 The last time I bumped into Chanda Romero, she was socializing with friends at the Cebu Country Club. My niece, Rovi, asked me, “Le conoces (Do you know her)?,” after the award-winning Cebuana actress greeted me rather fondly.

“Yes.” I replied.  “We go back a long way.”  I can’t remember which Joey Gosiengfiao or Elwood Perez film I first appeared in with Chanda, as the flamboyant filmmakers had the “habit” of casting me in their productions, either as a temperamental director or a bitchy movie critic.

With Chanda, the film I remember most is Eddie Romero’s multigenerational tale, “Aguila,” shot in 1979 and considered the epic to end all screen epics. Fernando Poe Jr., then the country’s Box Office King, was cast as the lead character. Appearing with him and Chanda were many other screen luminaries, like Amalia Fuentes, Elizabeth Oropesa, Jay Ilagan, Christopher de Leon, Charo Santos, Orestes Ojeda, Joonee Gamboa and Roderick Paulate. (I think even Aga Muhlach appeared in it as the young Ronnie.)

I introduced UP Rep actress, Yvette de Marcaida, to Eddie, who cast her as one of Aguila’s daughters. Thereafter, she costarred in an FPJ film and a couple of Lito Lapid starrers before she married Andy Poe. I also brought Daria Ramirez to the director for a small but demanding role, for which she won an Urian as Best Supporting Actress.

The film’s cinematographer was Mike de Leon, and Ryan Cayabyab composed its enigmatic music, while Mel Chionglo and Raquel Villavicencio were part of the production design team.

My first scenes were shot for three days in Pagsanjan, after my mother was buried. She passed away less than six months after my father died. Needless to say, I was shattered. On the set, however, it was time to socialize, and talk art and politics with friends like Ronnie, Raquel and Mel.

I was supposed to portray a Huk commander named Basilio, so I had to shoot, run and do things very macho—it was tiring! On my first shooting day, I brought along a script that was written (by Eddie) in English and was translated into Tagalog on the set.

Naturally, I started to fumble with and stumble over my Tagalog lines. I was in a scene planning an ambush with Ronnie, Boyet and Chanda, along with a dozen extras. Ronnie and Boyet were patiently waiting for me to straighten out my lines—even after Take Seven! I was so embarrassed!

Eddie was patient with me but couldn’t understand what my problem was. Seated beside me on a bamboo bench, Chanda squeezed my thigh to reassure me. I said, “Thank you.”

So, the next take was readied. But, before Eddie could say, “Action,” I blurted out my line! I delivered it correctly, but I did it before before the director said, “Action!” Chanda squeezed my thigh again, as though to tell me, “Relax.” It was one of the longest days of my life!

But, I will never forget Chanda for being so supportive. We share an unspoken bond. So, I hope fate is as kind to her as she was to me years ago—when I needed a friend and found one in her. Daghang salamat, Chanda!