‘The Girl from Ipanema’ turns 50 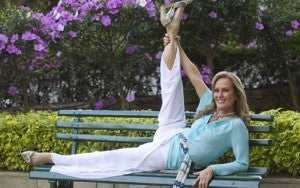 In this July 3, 2012 photo, Heloisa “Helo” Pinheiro, the woman that inspired the classic bossa nova song, “The Girl From Ipanema,” poses for a picture in Sao Paulo, Brazil. The quintessential tune was inspired by Pinheiro when she passed the songwriters in a beach side bar on her way to the sea, 50 years ago. To its legions of fans, the decades have only heightened the song’s allure, adding a wash of nostalgia to this hymn to passing youth and beauty. At 68, Pinheiro has two TV shows roles and is planning to launch a book in English about her past. AP/Andre Penner

RIO DE JANEIRO — “Tall and tan and young and lovely…” You’ve heard of her. The Girl From Ipanema.

You might have come across the bossa nova classic while on hold on the phone, during a long elevator ride, or in a cafe in Beirut or Bangkok — but you’ve heard it. It’s been recorded by everyone from Frank Sinatra to Amy Winehouse, and survived bad lounge singers and Muzak incarnations to become, according to Performing Songwriter magazine, the second most recorded song in the world.

The quintessential bossa nova tune, inspired by a young woman who passed the songwriters in a beachside bar on her way to the sea, introduced Rio de Janeiro to the world. Now, it’s turning 50, and to its legions of fans, the decades have only heightened its allure, adding a wash of nostalgia to this hymn to passing youth and beauty.

“I love this music, and had been searching for this place,” said Venezuelan tourist Xiomara Castillo, who with her husband was taking pictures inside the bar where the song’s authors watched their muse saunter by in the song’s eponymous neighborhood. “For me, Rio de Janeiro is this song, is bossa nova; the city has this rhythm, this charm, this sensuality.”

Indeed, the song carries within its chords and lyrics an image of a city that’s light and easy, palm trees and blue sky, a sun-kissed life without care.

Rio is in “the levity of the song, its absolute elegance, the way it doesn’t take itself seriously” said Ruy Castro, a writer and journalist who has chronicled the city, its music and its nightlife.

This girl who “swings so cool and sways so gently” first stepped out in public on August 1962, in a cramped Copacabana nightclub.

On stage together, for the first and only time, were the architects of bossa nova: Tom Jobim on piano and Joao Gilberto on guitar, with help from the poet Vinicius de Moraes, who gave “The Girl” her lyrics. Also performing was the vocal group Os Cariocas.

Bossa nova was still young then, somewhat of a novelty even in Rio. The name meant “new trend” or “new way,” and that’s what it was: a fresh, jazzy take on Brazil’s holiest tradition, the samba. 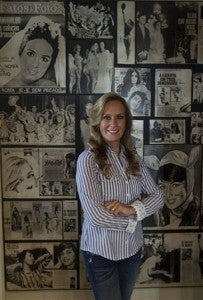 In this July 3, 2012 photo, Heloisa “Helo” Pinheiro poses for a photo backdropped by a collage of pictures from her youth, in Sao Paulo, Brazil. AP/Andre Penner

The rhythm was the same. But where samba was cathartic, communal, built on drums and powerful voices, bossa was intimate, contemplative, just a singer and a song. The melody, on guitar or piano, stepped up to the front. Percussion receded, played sometimes with brushes for a softer texture reminiscent of surf washing on the sand.

The 1962 show at the club Au Bon Gourmet established bossa nova, wrote Castro in his book about the genre. It didn’t just introduce the Jobim-penned “Girl”; other bossa classics, such as “So danco samba” and “Samba da bencao,” also were played publicly for the first time.

The small club — 20 by 130 feet — sold out every night as patrons realized something extraordinary was happening on the cramped little stage.

Severino Filho was there when it happened. As an original member of Os Cariocas, he was one of the first to ever hear the song.

“Tom and Vinicius had just composed it; it was still on a scrap of paper. Only later did they write it out on a clean sheet,” he said. “At first, people in the audience just listened. But they’d come back, and would start to sing along. After that, bossa nova just exploded.”

That was also the year most Americans first heard bossa nova. The 1962 record “Jazz Samba,” by Stan Getz and Charlie Byrd, took the sound of Brazil and filtered it through the sensibility of American musicians, making it palatable to the country’s listeners. Although an instrumental jazz album, it remained on the Billboard charts for 70 weeks.

After that, everyone wanted a bit of Brazil. Jazz greats such as Miles Davis, Dizzy Gillespie and Ella Fitzgerald made bossa-inspired recordings. Performing Songwriter magazine says only The Beatles’ “Yesterday” has been recorded more often.

Still, it wasn’t until 1964 that “The Girl” came to the U.S., with its English lyrics written by American Norman Gimbel. The words are different from the original Portuguese ones but remain true to their spirit.

It could have been a dud.

Astrud Gilberto, Joao Gilberto’s then-wife, sang the English words in the album “Getz/Gilberto.” It was her first professional gig. Her voice is young, breathy, but there’s a little hesitation; she trips over her English oh-so-lightly.

As it turns out, she was perfect: exotic but accessible, sultry and innocent at once. Like the girl in the song, Astrud’s voice suggested a beauty that was enticing but just out of reach: “Each day, when she walks to the sea, she looks straight ahead not at he.” 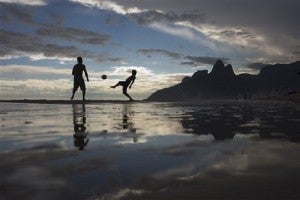 In this Dec. 16, 2011 file photo, two men play soccer at Ipanema beach in Rio de Janeiro, Brazil. The bossa nova song, “The Girl From Ipanema” is turning 50, and to its legions of fans, the decades have only heightened its allure. The tune inspired by a young woman who passed the songwriters in a beach side bar on her way to the waters of Ipanema beach, carries within its chords and lyrics an image of a city that’s light and easy, palm trees and blue sky, a sun-kissed life without care. AP/Felipe Dana, File

American Tryg Sletteland, for one, fell under the song’s spell from the moment he first heard it while in college in the early 60s, he said during a recent walk along Ipanema beach.

In fact, “The Girl from Ipanema” primed him for romance, Sletteland said amid the beach’s bustle.

When he met Sonia Madeira de Ley, who’d gone from Rio to Vermont to study English, he felt like he’d found his own “Girl from Ipanema.”

“She was the embodiment of the song: long dark hair to the middle of her back, big dark eyes, and this ‘morena’ skin,” he said. “And she was so graceful … She was exotic and beautiful. I’d never met anyone like that.”

Their whirlwind romance ended when she returned to Rio. More than 30 years later, with help from the Internet, the two reconnected. Now they’re finally together, and split their time between Rio and California.

“He still calls me his Girl From Ipanema,” said Sonia, who now goes by her married name, Sletteland.

The “Getz/Gilberto” album eventually won the 1965 Grammy for best album of the year, and suddenly, everyone was talking about “The Girl.”

Except the girl herself. Because there was a girl: Heloisa Eneida Menezes Paes Pinto, then 17 years old, known among her friends as Helo.

The teenager’s days were spent between home, school and the beach, a path that often took her by the bar where de Moraes and Jobim spent long hours nursing their drinks. Their eyes would follow Helo when she passed, entranced with her glowing skin and long dark hair.

Helo had no idea. When she first heard the hit on the radio, she liked it. She’d whistle it sometimes. But she never suspected she’d inspired the lyrics.

There were rumors from the guys at the bar, but she wouldn’t believe them. Finally, in 1965, Moraes offered the definitive proof, writing in a magazine that Helo was the beauty behind the song, “the golden girl, mix of flower and mermaid, full of light and grace, but whose sight is also sad because it carries within it, on the way to the sea, the sense of youth that passes, of beauty that doesn’t belong only to us.”

In spite of the stir she created, Helo had a traditional upbringing, and the song did little to change that, she said. Between her strict parents and her fiance, then husband, she turned down invitations to do films and shows on TV.

“I was flattered, of course. But it left me wondering, do I really deserve all this?” she said. “It was a weight, trying to please everyone, to show these characteristics that the song called for.”

Her fiance, who had been her high-school boyfriend, pushed for a quick wedding, and she spent the next decade as a housewife. Now, at 68, she’s far more comfortable with her notoriety, doing two TV shows and planning to launch a book in English about her past.

“Back then, I never thought I’d get old,” she said. “But youth passes. We have to live each moment.”