Beauties ham it up in remake of campy classic 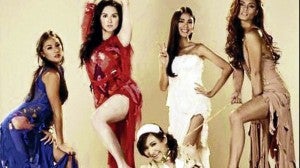 HEUSSAFF, RIVERA, EVANGELISTA AND POE. Win some, lose some.

Does Chris Martinez’s remake of “Temptation Island” live up to the feisty ebullience of Joey Gosiengfiao’s wacky original? We re-viewed the Dina Bonnevie-Alfie Anido starrer the day before its new version opened in local cineplexes, so we were curious how director  Martinez could channel the kitsch and estrogen-pumped catfights that made the 1980 comedy a camp classic.

While “tamer” than its irreverent predecessor, Martinez’s faithful remake has a strong nostalgia factor going for it: To pay homage to Gosiengfiao, the four beauty-pageant finalists for the Ms Manila Sunshine model search who are marooned on a fictional desert-island for a week have been rechristened after the femme fatales of Gosiengfiao’s bold flicks in the ’70s and ’80s:

Without straying far from the original material, Martinez does some thematic refitting to give the new production a contemporary spin. But he pretty much retains (even perpetuates) its feisty spirit—with a lot of help from his bevy of lovely beauties:

The usually reliable Rivera hams it up and comes up with a dynamic performance—unfortunately, she is compromised by her inability to deliver her English lines with flair and conviction. The adorable Solenn scores with her zest and girlie appeal.

While cast appropriately, Heart fails to spit enough thespic “fire” in a role that would have allowed her to go toe-to-toe against the magnificently sizzling Lovi, who chews up every scene she’s in. When Lovi engages the other girls in a fistfight, it’s easy to see why she is her father’s daughter—even when Rivera’s “Darna”-like posturing eventually wins out in the end!

Lapus makes his gay role his own, but doesn’t have Sebastian’s facility with the Queen’s language. Grossly miscast are Abrenica and Daez, who would have fared better if they had exchanged roles.

Aljur’s boy-next-door appeal instantly vanishes when he’s made to mouth English lines that flowed with genuine “coñotic” believability when it was Anido who delivered them. Worse, the hunky actor is as stoic as he was on “Machete”—which is a pity, because he was promising in 2009’s “Nandito Ako, Nagmamahal Sa ’Yo”!