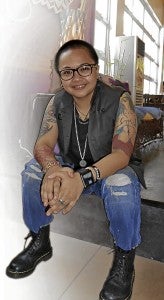 “Eat Bulaga” discovery Aiza Seguerra was only 4 when she won the hearts of televiewers with delightfully witty ad-libs and one-liners.  She wasn’t as pretty as some of the other tots on the show’s “Little Miss Philippines” tilt but her spontaneously  gamine performance made that “lack” totally irrelevant.

Nobody remembers who won that year’s kiddie tilt, but everybody still dotes  on Aiza to this day, some 25 years after the big first impression she made.

Well, “everybody” could be an exaggeration, since there are some viewers and former fans who haven’t quite forgiven Aiza for growing up and being true to herself by admitting that she’s more than just a frisky “tomboy”—she really prefers girls, period.

It must have taken real guts for her to “come out” in so clear and honest fashion, especially in this country where girls are supposed to be sugar and spice and everything nice—no arguments about it! Yes, local show biz did have its “female Elvis Presley of the Philippines,” but Aiza has “come out” much further than that!

On the other hand, Aiza’s honesty and courage made some people admire and love her more. They know full well the great risk she was taking of being rejected by her fans, so they cheer the fact that this hasn’t happened, and that Aiza remains a star, even as many of her contemporaries have faded from view.

Another risky move that Aiza took was to radically adjust her career focus and concentrate on her musical talent, as a singer and instrumentalist, and cut down on her comedic and dramatic portrayals.

She didn’t have a great, big birit voice; she could have faltered and failed—but, so great was her belief in herself, her emotions and her intelligence that her self-reinvention as an acoustic musical performer turned out to be a smash hit.

Best news of all

Which proves that, if you’re true to yourself and objective in your appreciation of what you have to offer to your audience, you really can’t go wrong.

These days, the best news of all is that, even as her musical career continues to prosper, Aiza has also rediscovered and strengthened her skills as an actor, with her new teleserye, “Be Careful With My Heart,” strongly showcasing her thespic gift in the attention-calling co-starring role of female lead Jodi Santamaria’s “tomboy” sister.

Just in the nick of time, as she’s marking her 25th year in the biz, Aiza is proving that she’s become a total performer. Indeed, she’s so good that, come next season, we hope that a savvy, canny producer will beat others to the draw by coming up with an all-singing, all-acting cinematic or theater showcase for her, to make the “silver” celebration official.

If you feel the same way, make your own celebratory voices be heard—and proclaim to the world why you admire and love the “new and improved” Aiza Seguerra!