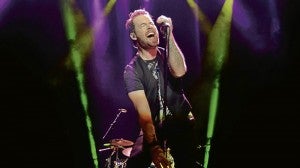 “STAR” of the show was Cook’s searing vocals. PHOTO BY KRIS ROCHA

David Cook wasn’t quite sure what to expect from his Manila audience the second time around.

But on Saturday, the “American Idol” 2008 winner, now platinum recording artist, found at Smart Araneta Coliseum a mob of die-hard, banner-toting female fans screaming and mouthing every word to each of his songs.

It wasn’t a packed house, but it sure felt and sounded like one.

Backed by Andy Skib on guitar and keyboards, Devin Bronson on lead guitar, Monty Anderson on bass and Nick Adams on drums, Cook set the night’s tone with “Circadian.” He followed it up with “Heroes,” which he masterfully meshed with Oasis’ “Champagne Supernova.”

Aside from dishing out fan favorites from his previous albums “David Cook” and “This Loud Morning,” Cook introduced new stuff from the record he’s currently working on—“From Here to Zero” and “The Last Song I’ll Write for You.”

In between songs, Cook joked around and shared some laughs with the crowd. He recounted his first visit to the country with David Archuleta:

“I walked on stage in this amazing venue, and looked over thousands of people. And I thought, ‘Wow, I’m halfway around the world, to a place I’ve never been before. And all these people singing my songs back to me is very strange and very awesome.’”

He continued, laughing, “Our very next show was back in the States in Akron, Ohio, and we played to a capacity room of 800 people. I said, ‘Man I can’t wait to be back to Manila!’”

The songs started to sound repetitive, with a few following the same loud-mellow-loud pattern. Still, the melodies and choruses were accessible and ear-catching enough that even listeners like us, who were not familiar with Cook’s discography, got into a foot-stomping mood. 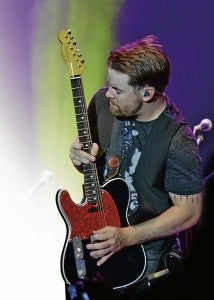 The real star of the concert, without question, was Cook’s searing vocals that punched through the loud instrumentation and resonated throughout the venue. Not only did he hit and hold high notes with aplomb; that voice had grit, enough to take on edgier songs

The pace was cranked up and the stage set ablaze with a high-octane cover of Led Zeppelin’s “Rock and Roll.” Cook’s prowess was in full display, with the rocker belting and growling above his normal vocal range without much of a hitch. His version of “Whole Lotta Love” was impressive and exciting.

In an acoustic solo of the sentimental “Fade into Me,” Cook poured his soul into the song’s heartfelt lyrics, baring a vulnerable side.

But the best-applauded number was his version of the Mariah Carey hit “Always Be My Baby.” Together with local pop star Yeng Constantino, Cook took everyone on a journey back to his “Idol” days, when he first performed the cover, which Simon Cowell described as “a breath of fresh air.”

In a press con the day before, Cook said he didn’t want anyone to leave the concert feeling that they didn’t get their money’s worth. Seeing how appreciative his fans were of his music, Cook said he couldn’t be more grateful.

Before calling it a night, he told the crowd: “I guess it’s safe to say that I absolutely love playing in Manila. You guys are incredible … I love you!”