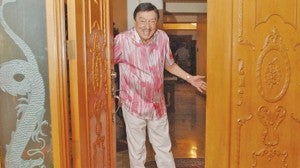 FILIPINO EVERYMAN Dolphy portrayed roles that reflected the life of the Filipino common man who could make light of any adversity. In this photo taken on June 10, 2009, he welcomes Inquirer staffers to his house in Parañaque City. INQUIRER FILE PHOTO

MANILA, Philippines – National Commission for Culture and the Arts (NCCA) Commissioner Sorsogon Representative Salvador Escudero III on Monday said that they were sure to tackle the possibility of awarding the national artist title to the late Rodolfo Vera Quizon Sr., more popularly known as Dolphy.

He told Radyo Inquirer 990AM during an interview that the members of the NCCA would meet to discuss the merits of bestowing the title to the King of Comedy and send their recommendation to President Benigno Aquino III.

A posthumous award for Dolphy should be prioritized and could be given within the year, said Escudero who however could not determine how long the process would be before they could actually proclaim the late comedian as a national artist.

But as far as the NCCA commissioner knew, Dolphy had no contender for the award.

Escudero who chairs the House committee on basic education and culture, was earlier directed by Speaker Feliciano Belmonte Jr. to ensure that House Resolution 2404, which seeks to declare Dolphy as a national artist, be tackled once the 15th Congress resumes its work by July 23.

For more of the interview, listen to Radyo Inquirer 990AM.