Yul Vazquez with Rio Locsin in a scene from “Amigo”

In an e-mail interview, we asked Yul about working with Bembol, Rio Locsin and other Filipino actors, and being directed by John Sayles for the first time. “Amigo,” a drama shot in Bohol, stars Joel Torre as Rafael Dacanay, a village leader during the Philippine-American War in 1900.

Born in Cuba and raised in Miami, Yul was named after the late actor Yul Brynner. He is coartistic director of the New York-based LAByrinth Theater Company and is married to actress Linda Larkin.

Congratulations on your Tony nomination. What was that like?

It was a great honor and a very interesting experience. It was almost a distortion of why we do theater, to begin with. You can never go into a project seeking accolades. Out of nowhere, they come and it can be jarring. You must really try to stay even. The highlight was having my wife there with me.

How much did you know about the Philippine-American War before shooting “Amigo”?

I knew a little, but the minute I joined the project, John Sayles sent tons of research and historical materials. John is probably the smartest human being I have ever known. 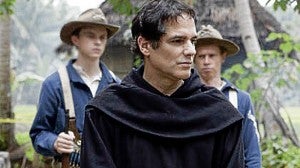 “SWEAT would pour under it nonstop,” says Yul of his Spanish friar costume.

You speak four languages in this film—English, Spanish, Latin and Tagalog. How did you adjust your accent? Who helped you deliver the Tagalog lines? Do you understand a bit of Tagalog now? I read that Rico Locsin helped you.

The Spanish is just something I worked on. I’m a guitar player, so my ear is pretty good. The Tagalog was another story. I worked very hard on that in the two weeks that I had to prepare. It posed a great challenge, one that excited and terrified me at the same time. Yes, the lovely Rio Locsin became my tutor once I arrived in Bohol. She was kind enough to work with me every day; I will always be grateful for that.

Describe the experience of working for the first time with John Sayles in a movie shot in the Philippines.

It’s hard to put into words. John Sayles is one of the greatest filmmakers ever. To work with him has been a dream of mine since I started acting. He’s a consummate storyteller and a very calm leader. To actually live that dream and to juxtapose that against the backdrop of the Philippines, well, the top of your skull comes off.

What surprised you most about filming in the Philippines?

Everything. I had never been there before. The Filipino film industry and its infrastructure are fantastic. I would love to shoot there again.

Bembol Roco said in an interview that he especially enjoyed working with you. What struck you about him as a fellow actor and as a person?

Bembol is a stage actor, as is most of the cast. He has a presence that is very commanding, and a tremendous voice. And he’s a hell of a nice guy with a tremendous tan! He’s fantastic in the film. Joel (Torre), Bembol, Rio, John (Arcilla) and Irma (Adlawan)—they are all very experienced theater and film actors. They’re amazing.

How did you stay cool in that Spanish friar costume amid the tropical heat of the Philippines?

I didn’t. Sweat would pour under it nonstop. It was about 100 degrees. Father Jim Martin, a Jesuit priest friend of mine, said it’s the most authentic vestments he’s seen in a film. Gino Gonzales did an amazing job.

Did your wife Linda visit you in the Philippines? What did you enjoy doing during breaks from filming?

Yes, Linda came to visit. We did a little tour of Bohol. We saw the tarsiers, a giant boa constrictor, and a Lady Gaga impersonator at the same place the snake was. I was just glad the snake liked Gaga. When we were done shooting, we went to Cebu and then to Bali.

What will be your fondest memory of the opening night of “The Motherf**ker…” many years from now?

That would be doing our group circle at five minutes to places, wondering if we would still be open on Sunday.

To be on stage, for your Broadway debut project, with Chris Rock, Bobby Cannavale, Annabella Sciorra and Elizabeth Rodriguez six days a week, what was that like?

These are all great actors and great people. Every night is a joy to come to work. I will miss them all when we are done.

What happens when it ends its run in July, are there plans to tour the play?

Personally, I don’t know. It’s got a title that, from a marketing perspective, could be problematic for middle America.

What’s next for you?

The day after we close, I go to Miami to start work on Mitch Glazer’s new show for the Starz network, “Magic City.” I’m very excited to be doing it.

Read Next
The real ticket to child stardom
EDITORS' PICK
Smart celebrates all kinds of ‘#SimplyLove’ for Pride Month
Smart brings KCON:TACT especially 4U to subscribers from June 19 to 27
Lacson disputes need for more COVID-19 vaccine funds
How this dad raised an empowered trans daughter
Gilas out to prove Korea win not a fluke; Tab fires back at ‘lucky shot’ remark
Minor’s death in Laguna drug raid prompts probe; 10 cops held
MOST READ
Underdog Dasmariñas vows to fight to the death vs Inoue
The opposition’s dilemma
Rajko Toroman praises, warns Gilas Pilipinas
How this dad raised an empowered trans daughter
Don't miss out on the latest news and information.