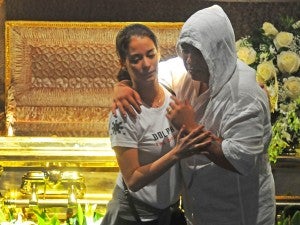 MANILA, Philippines — She may have been one of the women in Dolphy’s life but in the Comedy King’s dying moments, former actress Alma Moreno was unfortunately not by his beside.

Now a Parañaque City councilor, Moreno instead got the sad news from Vandolph, her only child with the 83-year-old comedian. “Ma, wala na si Papa (Ma, Papa is gone),” went the brief text message that sent her sobbing.

Moreno spoke with fondness about Rodolfo “Dolphy” Quizon while attending an event by the Philippine Councilors’ League, of which she is the president, at the Senate on Thursday. She said she had not gone to the wake because of her many political obligations, but would do so soon.

Moreno said she last saw the ailing Dolphy when she paid him a visit at the intensive care unit of the Makati Medical Center not long ago. Her last words to him were that of assurance that she would take care of their only child.

“I will always be behind him,” she told Dolphy in Filipino. As if taking a leaf from the Dolphy’s signature punch lines, she held his hand, removed her protective mask and said: “Dolphy, look at me. I’m still pretty.”

It was clear that Moreno’s priority now is to continue watching over Vandolph, a constant companion of his father ever since he was a child. The bond was so strong that the son had his father’s image tattooed on his arm recently.

“Mama, it’s like Papa is still with me,” she recalled Vandolph telling her.