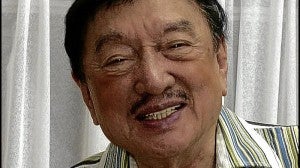 In an information sent through Dolor Guevarra, talent manager of Eric Quizon, she said Dolphy’s remains will be made available for public visitors at 9 p.m. at the Dolphy Theatre inside the ABS CBN compound in Quezon City.

Dolphy, she said, will stay inside the theater named in his honor until 3 a.m. Thursday before he will be transported back to the Heritage Park.

Public viewings at the Heritage Park are scheduled from 8 a.m. to 3 p.m. Thursday until Saturday, a day before his tentative burial on Sunday.

In an article posted on the website of ABS-CBN, it said the theater was previously called Studio 1 and was renamed after Dolphy in July 2008 to honor his contribution to the giant network and as a gift for his 80th birthday.

Dolphy, who was 83 years old, passed away at 8:34 p.m. Tuesday due to multiple organ failure, secondary to complications brought about by severe pneumonia, chronic obstructive pulmonary disease, and acute renal failure.

He was survived by his common-law partner Zsa Zsa Padilla and his 18 children.