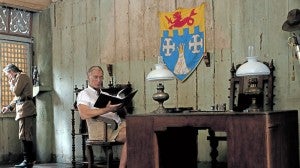 As actor Joel Torre puts it, US filmmaker John Sayles knows more about Philippine history, specifically the chapter on the Philippine-American war at the turn of the century, than most Filipinos.

This theory was put to a test when Sayles presented his period film, “Amigo,” to students and teachers at the Cultural Center of the Philippines last year. An audience member questioned the depiction of the massacre of Chinese conscripted laborers. Quick on the draw, Sayles cited historical records that support the film’s authenticity.

In a recent e-mail interview, Sayles told the Inquirer that the Phil-Am war was a turning point in both nations’ histories. It proved crucial to “how America got to be America and how the Philippines got to be the Philippines. It’s important to know the family history.”

In his interactions with Filipino audiences at the CCP in Manila and in Davao City (for Cinema Rehiyon in February), Sayles realized that many Filipinos were unfamiliar with that period.

“Despite the work of historians and educators, we get ideas of history from popular culture,” he said, “and the period has not been addressed sufficiently.” Sayles hopes to bridge the gap with “Amigo” in theaters this week, with the help of distributor Origin8.

He described the journey of “Amigo” to local cinemas “as a long haul.” Still, he remains excited, he said, “because Filipino audiences will finally get to see the movie and the work of the terrific cast and crew. I hope it sparks lots of debate, and maybe more Filipino movies on the subject.”

Sayles has embarked on a US tour to promote his novel, “A Moment in the Sun,” about the same period in history. “[Producer-partner] Maggie [Renzi] and I drove 11,000 miles, which was really fun,” he said. “The tour took 40 days. I did a reading recently at Fully Booked [at The Fort].”

He wasn’t sure when he can visit the Philippines again. “We’d like to see our friends and visit islands we haven’t been to.” He’s raring to work here again, too. “Amigo” was shot in Bohol and some parts of post-production were divided between Bohol and Manila. “Yes, I’d love to make another movie in the Philippines,” Sayles said. “I just need the money as usual.”

He was really impressed by his Filipino crew, Sayles said. “There is a lot of talent over there. It’s just that they get only days rather than weeks to do their work (for local films). Given the time, there’s no reason they can’t be globally competitive. The studio where we produced the music, Hit Productions, is as good as you’ll find anywhere.”