Tom Cruise at 50 could be more olden than golden 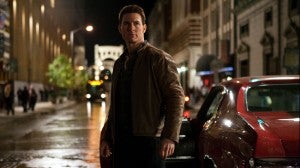 Action-adventure film superstar Tom Cruise turned 50 last week – but the celebration has been muted due to the recent decision of his wife, Katie Holmes, to leave him after only five years of marriage. She’s specifically seeking sole custody of their only child, Suri, to make sure that she isn’t forced to choose Cruise’s faith, Scientology, over Holmes’ (Roman Catholic).

Holmes’ abrupt decision to file for divorce reportedly “blindsided” her superstar husband, who has otherwise been going from one success after another with his “Mission Impossible” hits and his recent acting triumph in “Rock of Ages.”

So, why did Katie leave him when he was at the top of his game? Insider reports have it that Cruise is a control freak, and his much younger wife wanted her freedom back.

On the other hand, pro-Cruise observers note that he did give her enough leeway in her acting career to pursue different opportunities that expanded her range as a performer. So, what really gives?

Another commentator offers an even more confounding observation: All of Cruise’s past wives, including Nicole Kidman, separated from him when they were 33 years old – which just happens to also be Katie’s age!

That may be true, but what can we make of that bit of tantalizing trivia? That he has the strange habit of ending his marital relationships when his life partners hit 33? But, it was Katie who left him, so the interesting theory doesn’t hold up to closer scrutiny.

The big career question now is: How will Katie’s abrupt departure affect Tom’s stellar image and the grosses of his coming movies?

Male stars are more impervious than their female counterparts to the negative effects of their personal problems on their careers, so it’s a safe bet to predict that Cruise will continue to make tons of money—if his movies keep giving action film buffs a cinematic high.

A positive sign in this regard is the fact that Cruise has kept his youthful looks and physical vitality – well, more or less. He looks two decades younger than his actual age, so he can be expected to do at least some of his own daredevil stunts in his action starrers for years to come.

Less certain is his personal, off-screen image, at least as far as some female fans are concerned. Male moviegoers aren’t as touchy-feely about these things, but some women frown at Cruise because they see in his relationships an emerging pattern of, not physical abuse, but two kinds of psychological “mis-use” of his marital partners.

In Nicole Kidman’s case, some reporters have it that he dropped her after years of “togetherness,” just before a legal deadline that would have required him to pay more in alimony.

This may be why Kidman dissed him after their “well-timed” breakup by snidely sighing. At last, I can wear high heels again!” (She was inches taller than his 5’7” height.)

Holmes is also taller than Cruise, which is why she too was “required” to wear flats when they stepped out together, but she hasn’t made similarly snide comments to that effect-yet. But, if he contests her plea for sole custody of Suri, things could turn sour. And subsequent developments could conspire to make Cruise’s 50th year more olden than golden.