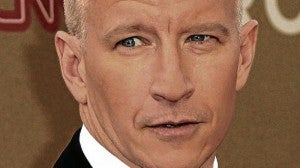 FOR most of his professional life, Anderson Cooper, the acclaimed broadcast journalist and TV public affairs program host, has struck people as an odd man out. They admire him for his erudition, expertise, principles and courage—but, even as he covers dangerous incidents all over the world, he strikes some viewers as the veritable antithesis of their image of the rough, tough newsman.

He seems to be too cerebral, too introspective, too nice to compete and survive in the fiercely competitive world of broadcast journalism. —And yet, Cooper hasn’t only survived, he’s established himself as a top player who keeps getting promoted due to his excellent work.

His latest promotion came only last year, when he was tapped to host his very own self-titled daily talk-magazine show, “Anderson Cooper,” on CNN.

To make him more acceptable and “empathetic” to the non-news audience, Anderson was “packaged” in a different way—less austere and rigid, and more caring, sharing and simpatico. Some of the “humanizing” adjustments haven’t worked all that well, as we’ve noted in a recent article, but the new talk show host has generally made a successful transition, so hopes are high that he could emerge as “the next Oprah Winfrey.”

That confusion of genders has turned out to be Cooper’s latest and perhaps riskiest personal and career move to date: The breaking news on the TV scene this week is Cooper’s “confession” by way of Twitter, that he’s gay—and happy.

The “explosive” announcement confirms and explains what some viewers have suspected all along. “After all,” one of then retroactively gasped, “his mother is (fashion maven) Gloria Vanderbilt!” —As if that explained everything.

Another instant expert chimes in: “No wonder, he looked too good to be true on TV!” —Too good to be true to what? As Cooper’s surprising revelation last Monday indicated, he was only bent on being true to himself.

But now, of course, the whole world knows about it. So, the next question is, what effect will this have on Cooper’s TV career?

Twenty years ago, the immediate, obvious answer would have been: What career? There would be nothing left to consider, and Cooper would have had to reinvent himself as a hairdresser in Havana.

But, happily—and, OK, gayly—a lot has changed on the TV scene since those dark, stark days, and a lot of the thanks goes to—Ellen Degeneres. She began her career as a “straight” comedienne, but took a deep breath and played a lesbian on a TV sitcom.

The gambit was more controversial than successful, but instead of crawling back into her closet, Degeneres eventually reinvented herself as a talk-show host—and, lo and behold, televiewers took her the way she was and made her show a hit!

So, times have changed, which means that the newly self-outed Anderson Cooper doesn’t have to conclude that his career has self-destructed in the process. Ellen has shown that, if you’re talented, honest and funny, televiewers will stand by you and continue to support your show.

The difference, of course, is that Cooper is a guy who’s admitted he’s gay, so it isn’t clear just yet if the “Ellen effect” will work for him, too.

But, hopes are high that the times have indeed changed in a major way, so he too should be able to survive—and prosper.