My thoughts, memories, and reflections on the Eraserheads | Inquirer Entertainment

My thoughts, memories, and reflections on the Eraserheads 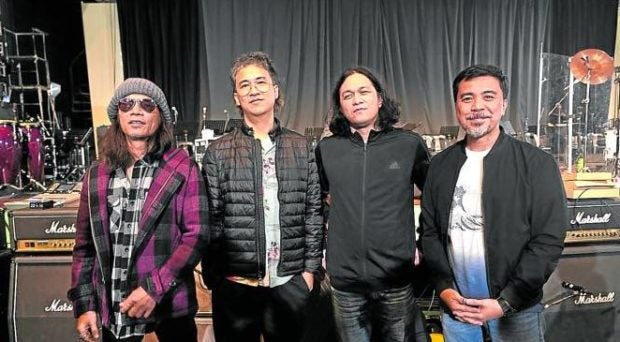 The Eraserheads during rehearsal for their reunion concert last December.

How many homegrown bands do we have from the last 30 years that can match the legacy of the Eraserheads? There are a few, but they are at a lower echelon than the E-heads. To the very sensitive, I am stating a proven fact and not being mean.

For the sheer number of songs that have become classics from a single band’s song catalog, it is only the Eraserheads who have the vastest number of hits of any local or homegrown band in the history of OPM. Also, when I say “hits,” I am not talking about songs that have been popular for a few months and will fall entirely off the radar of everyone who got to hear them soon after. However, some songs have been celebrated for years, if not decades, since they were first heard on the radio, seen on music channels, and seen live in any of their gigs or concerts.

It lends credence to the fact that the Eraserheads are “one of one” in the local music industry, and OPM, to be more specific. No one else is exactly like them.

While many have tried to emulate their formula, songwriting style, melodies, vocalization, and subject in their songs, many have tried, and many more have failed. Musical influences and inspiration can only take you so far when you compare your work and output to your idols and heroes in local music and OPM without entering the realm of music plagiarism, intentionally or unintentionally. In the end, many of those young bands had to find their inner voices and put that out in their music. They discovered the hard way that you can’t be Eraserheads clones and impersonators because they are incomparable to any other band attempting to sound like them. It is best to be yourself.

The E-Heads’ sound is uniquely theirs. You know an E-Heads song once you hear it, and it is not only because of the distinctive vocalization of frontman Ely Buendia but also because of how the music sounds.

While most people grew up hearing and listening to the Eraserheads’ songs early on, my introduction to their music came much later, in 1996, to be exact. During those formative years of my life, I was in grade school, reading Pol Medina Jr.’s Pugad Baboy comics, watching shows like Bubble Gang, and discovering many excellent local bands from the pop (Rivermaya, Sugar Hiccup, and Prettier Than Pink) and hard-rock genres (Wolfgang, Rizal Underground, Keltscross, Teeth, and Razorback).

Indeed, the early to mid-1990s were a great time to be alive if you were into local music. There were so many to choose from, and there was always the Eraserheads to buy their cassette tapes and listen to at home. You heard it right: cassette tapes—those things you put in a Walkman and the stereo. CDs existed, but they were limited and costly compared to the type of portable audio you can put into your listening devices. Damn, I feel old. But getting older is a great way to look back, and I consider myself fortunate to have lived during the Eraserheads’ prime.

I can recall the one time I got to see the Eraserheads live in person, performing, and that was in 1999, to support their final album together. It was the song “Torpedo,” blasting out of the speakers where they were performing in the middle of a mall, being watched by a jam-packed crowd that practically filled up all the seats. This was a mall tour, and they performed many past hits. We couldn’t stay long because we had errands to run, but the lyrics to “Torpedo” and its signature guitar riff were so awesome to hear live that we could listen to them even when we were on the top floor of the mall.

By that year in their lengthy careers, the Eraserheads were full-fledged veterans and pillars of the local scene and OPM. For many, the only thing left to do is continue to make music as they see fit or for as long as they want to. I’ll never forget that memory because I got to see, by chance, the most incredible local band ever to form, and even though it was the last few years of their stellar run, they’d be together. Still, I am one of those people from my age group who can say I got to see and hear the Eraserheads perform one of their most badass songs, “Torpedo,” in a mall, of all places.

For those who were able to watch the final reunion concert of the Eraserheads and were blown away by how great the four men were, imagine how these guys performed and sounded during the 1990s. The point I am trying to get across here is that the four members of the Eraserheads have aged like fine wine, which is rare for any band to achieve. 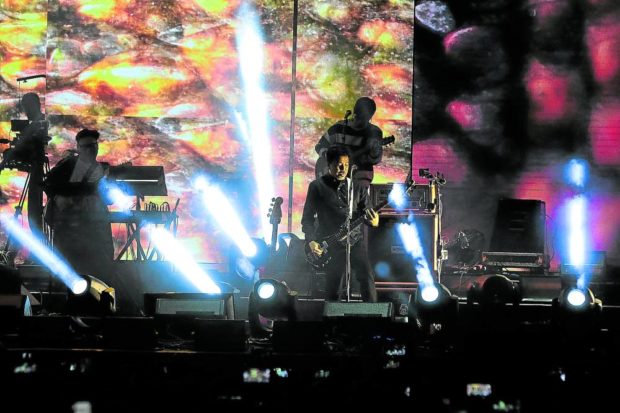 Indeed, the lead vocalist, guitarist, and lyrical genius Ely Buendia said it best in one of his recent quotes during their final reunion concert timeline, which I will paraphrase: “They did not have to be friends to be in a band together because they did it for the music, for the love of the music they created together, which has now become timeless and ageless for everyone.” Think of it. I know some were disheartened to hear him say that, which quote I believe is the message behind it, but, honestly, I get his point because all four members of the Eraserheads are men, they come from an emotionally and mentally more formidable generation and a generation that came before me, they are not that sensitive or fragile. They march to their beat and respective endeavors outside of music. They have their own lives most of all. However, when it comes to their songs, they are one. Everyone, especially the new and current bands, can now learn from that quote from Ely Buendia, which is a life lesson on its own.

His quote must be reiterated. I want you to know that you don’t have to get along with everyone in your band or bandmates because the fact that you’re all working toward the same goal of releasing your original music or music inspired by legendary bands like the Eraserheads is enough.

Learn from the Eraserheads; try to adopt the Gen-X mindset, approach, and toughness that my peers, friends, and people my age all possessed. No more “snowflakes,” please. Always consider what the next generation will think of your time when it is finished, and you are the one who is now older.

Their generation and my generation would tell you the same thing. Please do it for the music and stop trying to be friends with everyone and trying to please everyone. Lessen the love songs, too. There is so much other stuff to sing and write about. Remember, if you are a pop-rock or hard-rock band, you got to be well-rounded in your subject matters and not one-dimensional unless that is what you want.

Sometimes I wish I were transported back to the early 1990s, but this is where we are now, and it can only get better. The Eraserheads’ second and final reunion concert was like a blast from the past, as if they could rewind the hands of time for a few hours. They also did this for all of you young ones to give you guys a glimpse or a clearer idea of how they were collectively in their prime as one band.

Upon final reflection, it’s not surprising that a legendary local band that hasn’t been actively performing, releasing new music, or touring in any capacity for years can attract over 75,000 people to their second reunion concert, which they billed as their final reunion ever. Why so? If you are Filipino, and it does not matter how old or young you are, you know you have heard the songs of the Eraserheads, and you know they are equivalent to the Beatles in the Philippines. Their music is part of our DNA as Filipinos.

After everything that has happened in the world, it is a miracle that Ely Buendia, Buddy Zabala, Marcus Adoro, and Raymund Marasigan are all still alive! And I can say the same for everyone who attended their final reunion as a band.