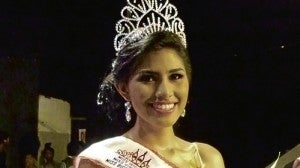 National beauty contests may want to look at the recent Miss Iriga City pageant which, despite breaking conventions, successfully mounted an entertaining production.

The pageant did not have a swimsuit competition—which is an eagerly awaited segment in most beauty contests.

An insider told the Inquirer that since Iriga Mayor Madelaine Alfelor-Gazmen took office, the segment has been scrapped from the pageant.

The source said Gazmen wanted to veer away from physical attributes as a major factor in winning beauty pageants and focus instead on the contestants’ inner strengths. The move also made it easier for the local government to attract aspirants who are not only educated but competitive as well.

Miss Rinconada is a title awarded to a candidate residing outside Iriga City but still within the fifth district of the province of Camarines Sur. Villafuerte hails from the town of Baao.

Villafuerte also showed her sense of spirituality—a trait which is likewise associated with Suspsup.

Asked to expound on the Irigueño’s spirituality, as symbolized by the city’s Emerald Grotto, Villafuerte replied: “Irigueños always put God first in everything they do. Because with God, everything is possible … God is a God of possibilities.”

The city’s famous landmarks, tourist attractions and indicators of progress were also integrated in the question-and-answer segment.

One of the judges said Villafuerte ranked first after tallying the scores of the panel. But because she is not eligible for the main title, she was proclaimed Miss Rinconada. Her crown came with a P110,000 cash prize.

The pageant also did away with staging a very long production, which was usually the practice in the provinces.

ABS-CBN star Luis Manzano was impressive as the evening’s host, trading banters with the crowd and the candidates.

All these elements made the 2012 Miss Iriga City pageant a showcase of Bicol’s beauty.