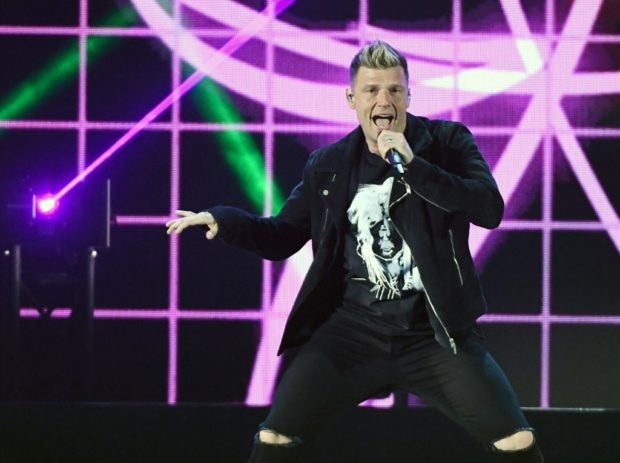 In this file photo taken on Nov. 10, 2019, Nick Carter of the Backstreet Boys performs onstage during the 2019 iHeartRadio Music Festival at T-Mobile Arena in Las Vegas, Nevada. A woman with cerebral palsy who claims she was raped as a teenager by Carter lodged a civil lawsuit against the singer in the United States on Dec. 8, 2022. ETHAN MILLER / GETTY IMAGES NORTH AMERICA / AFP

LOS ANGELES, United States—A woman with cerebral palsy who claims she was raped as a teenager by Backstreet Boys star Nick Carter lodged a civil lawsuit against the singer in the United States on Thursday, Dec. 8.

Shannon Ruth, now 39, said the singer forced her to perform oral sex on him on a tour bus after a show in 2001, and then raped her.

Attorney Mark Boskovich told a virtual press conference that Ruth, who was then 17, had been queuing for an autograph after a Backstreet Boys show in Tacoma, Washington, when Carter invited her onto the bus.

“He gave her a funny tasting beverage that he called VIP juice,” Boskovich told reporters.

Then “Carter took her to the bus’s bathroom and told her to get on her knees, and he pulled down his pants and exposed his genitals ordering (her) to perform sexual acts on him.”

Ruth, who was a virgin at the time, cried throughout the ordeal, but Carter persisted, Boskovich said.

“Carter took (her) to a bed in the back of the bus. He pushed her onto the bed and proceeded to rape her, despite her pleas.”

After the sexual assault, Ruth, who is also autistic, said she would tell people what had happened.

“He grabbed and bruised her arm and screamed at her,” the lawyer said, adding that Carter had called her “retarded” and said “no one would ever believe in her.”

Ruth, who has waived the right to anonymity that is customary for victims of sexual crimes, wept openly during the 30-minute press conference.

“Even though I’m autistic and live with cerebral palsy, I believe that nothing has affected me more or had a more lasting impact on my life than what Nick Carter did and said to me,” she said.

The civil lawsuit, which was filed in Las Vegas, demands unspecified damages from the singer, whose hits as a member of the Backstreet Boys include “I Want It that Way” and “Everybody (Backstreet’s Back).”

The suit says the 42-year-old Carter—who has previously faced unproven claims of sexual assault, which he denied—also abused three other women.

The three were not named, but Boskovich said lawyers had spoken to them.

Carter’s representatives did not respond to AFP’s requests for comment.

There was no mention of the lawsuit on Carter’s Twitter or Instagram accounts, which contained messages paying tribute to younger brother Aaron, who died last month.

Entertainment website TMZ quoted an unidentified source close to the singer as denying the claim.

“This accusation is categorically false. Nick is focusing on his family and mourning the death of his brother,” the site reported the source as saying.  /ra