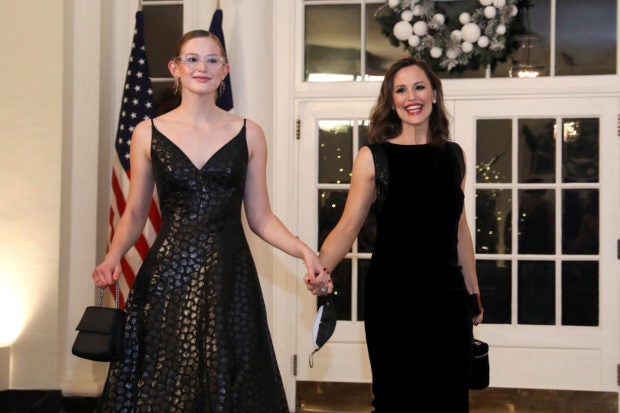 Jennifer Garner and her daughter Violet Affleck arrive for a state dinner in honor of French President Emmanuel Macron at the White House in Washington, US, December 1, 2022. REUTERS/Amanda Andrade-Rhoades

WASHINGTON — US President Joe Biden rolled out the red carpet on Thursday for celebrities, lawmakers, and titans of industry at the White House’s first state dinner in honor of French President Emmanuel Macron.

The dinner is the crowning social event of a trip aimed at showing Biden’s commitment to Washington’s oldest ally even as the two countries wrangle over how to handle Russia’s war in Ukraine, subsidies for US products and other issues.

On Thursday night, Biden and his wife, Jill, welcomed the Macrons back to the White House for the dinner after diplomatic meetings earlier in the day. 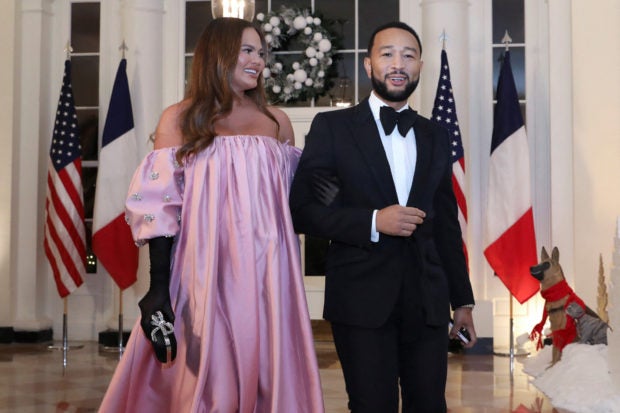 Chrissy Teigen and John Legend arrive for a state dinner in honor of French President Emmanuel Macron at the White House in Washington, US, December 1, 2022. REUTERS/Amanda Andrade-Rhoades

Less than two weeks after Biden’s granddaughter was married on White House grounds, the event brought a touch of pizzazz to the businesslike presidential residence, whose social calendar was undermined by precautions taken in the aftermath of the COVID-19 pandemic.

Guests strutted along the red carpet in front of reporters to a reception in the White House before taking a trolley bus to a pavilion on the South Lawn for the formal dinner around 10 p.m.

There they were treated to toasts, music from Jon Batiste, Chardonnay from the Napa Valley and cheeses from Oregon, California and Wisconsin. Some 200 Maine lobsters were flown in for the candle-lit occasion.

“It’s going to be fire,” Batiste told reporters of his performance as he arrived.

The lavish Washington dinner is one of few events that bring together people including the president’s son Hunter and Kevin McCarthy, who leads a Republican congressional delegation that has vowed to investigate his business dealings.

Macron arrived in Washington on Tuesday for his second state visit to the United States since the French leader took office in 2017.

Biden, 80, and Macron, 44, have had many meetings at international gatherings but this was the longest time they have spent together.

Macron added that the two countries come from “the same values” of “we, the people.”