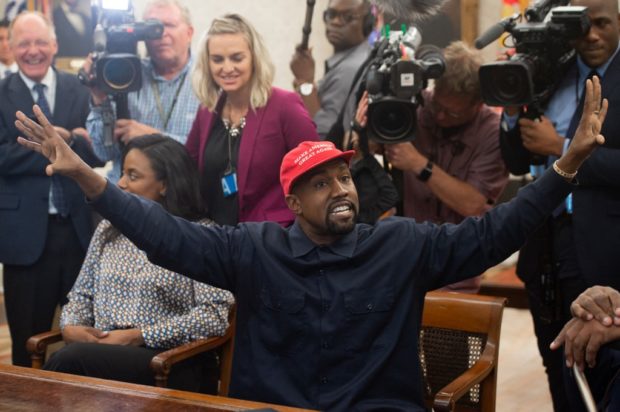 In this file photo taken on Oct. 11, 2018, Kanye West meets with then US President Donald Trump in the Oval Office of the White House in Washington, DC. The rapper and fashion designer Kanye West has suggested he will run for president and wants Donald Trump to be his running mate. Trump, for his part, brushed aside a recent meeting with West as of no significance. The artist, who goes by the name Ye, posted on Nov. 24, 2022, a swirling symbol on his Twitter account with “Ye” and the number 24, apparently representing 2024, the year of the next US presidential election. SAUL LOEB / AFP

WASHINGTON, United States—The rapper and fashion designer Kanye West has suggested he will run for president and wants Donald Trump to be his running mate. Trump, for his part, brushed aside a recent meeting with West as of no significance.

The artist, who goes by the name Ye, posted Thursday a swirling symbol on his Twitter account with “Ye” and the number 24, apparently representing 2024, the year of the next US presidential election.

Then the rapper posted a video of himself speaking about a meeting this week with the former president in Florida.

“I think the thing that Trump was most perturbed about (was) me asking him to be my vice president,” West said.

“Trump started basically screaming at me at the table, telling me I’m going to lose,” West said. “I’m like, hold on Trump, you’re talking to Ye.”

Trump, who tried to overturn the results of the 2020 presidential election he lost to Joe Biden, announced last week that he would run again in 2024.

Trump posted on Friday on his Truth Social platform about his meeting with West, saying the two discussed politics “to a lesser extent” than business, and that West had asked Trump “for advice concerning some of his difficulties.”

The two “got along great,” Trump said, adding that he told the rapper “he should definitely not run for President” because “‘any voters you may have should vote for TRUMP.'”

In an earlier post on Truth Social, Trump said a meal the two shared Tuesday night at Mar-a-Lago was “quick and uneventful.”

Trump said the rapper called ahead to arrange the dinner, then “unexpectedly showed up with three of his friends, whom I knew nothing about.”

The group ate on the back patio of Mar-a-Lago, then West and his friends “left for the airport,” Trump said.

West posted after the dinner on Tuesday that he had posed the question to Trump about joining his presidential ticket.

“What you guys think his response was when I asked him to be my running mate in 2024?” West asked.

It was not clear whether the rapper was serious about his intentions—or if he sought publicity after a spate of PR moves that put him in a negative light.

West is a veteran at garnering publicity—and dabbling in politics. He ran for president in 2020, but got fewer than 70,000 votes, coming in seventh place.

Adidas later said the termination of ties with West had forced it to slash its forecast of net income for 2022 by half. West had helped Adidas develop its successful “Yeezy” line of clothing.