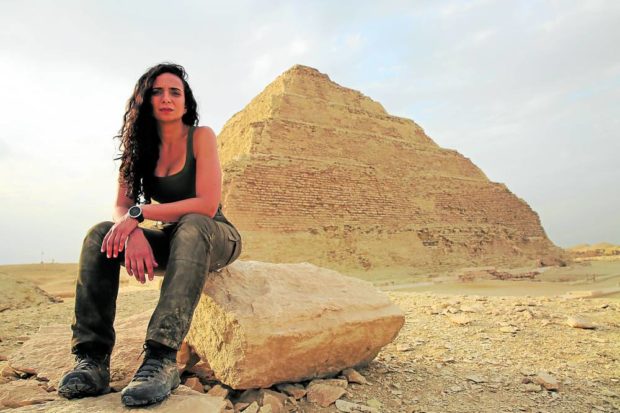 It isn’t every day that we get to talk to a National Geographic explorer who uses stand-up comedy on platforms like TED Talks and the Edinburgh Fringe Festival either “as a way to communicate science” or “as a coping strategy for the darker side of her work.”

But paleoanthropologist/archeologist Ella Al-Shamahi, who’ll be presenting Nat Geo’s intriguing documentary “Tut’s Toxic Tomb” today at 9 p.m., isn’t just any TV host tasked to sight-read cue cards or teleprompters while looking picture-pretty. Her show reopens one of the greatest cold cases in history, which is no easy feat in itself.

We enjoyed our recent one-on-one chat with Ella so much that we almost forgot she had other interviews lined after our talk.

“Tut’s Toxic Tomb” presents a daring show that doesn’t merely commemorate what is often known in the scientific community as “the greatest archeological find of all time.” But at the heart of that once-in-a-lifetime excavation is a mind-blowing mystery that continues to capture people’s imagination.

Around 1324 B.C., Egyptian boy king Tutankhamun succumbed to malaria when he was only 19 years old. He was buried in an intact tomb along with thousands of treasures, including royal chariots, a sculpture of the god of the dead Anubis, and a dazzling golden death mask designed to guide Tutankhamun’s spirit “back to his resting place.”

But exactly 100 years ago—on Nov. 26, 1922—Howard Carter had successfully dug up the treasure-filled tomb of the young monarch in the Valley of the Kings some 300 miles (483 kilometers) outside Cairo in Egypt.

It didn’t take long before creepy circumstances began to unnerve the rest of the world, especially after the people who had entered the tomb began dying one after the other. Thereafter, tales of a “Pharaoh’s curse” spread like wildfire.

Were the deaths just coincidental or were they merely sensationalized to sell copies of competing newspapers?

In the docu, Ella attempts to let medicine and modern science explain the truth behind those unexplained deaths—but that’s easier said than done. Be that as it may, the so-called Pharaoh’s curse continues to intrigue people everywhere, as numerous movies and TV shows about it indicate. 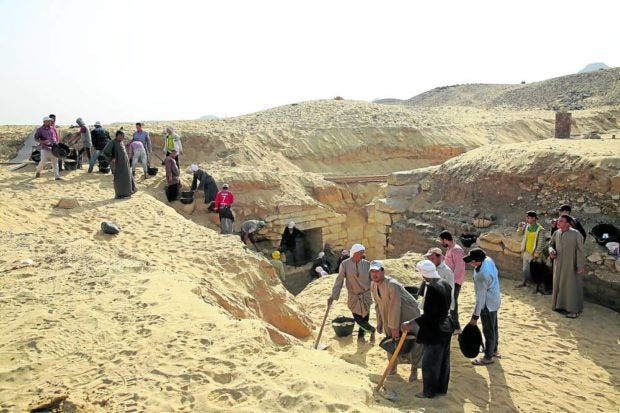 “Before I even saw the pyramids, ancient Egypt has already been fascinating,” said Ella as she tried to explain people’s interest in it. “I mean, they built these pyramids! And generally, we like bling … we like shiny things … we like gold.

“And it’s still the most intact tomb of a pharaoh we’ve ever seen—there hasn’t been anything like it. Most tombs are looted, so there’s very little left of them. So, to walk in and see this, it’s like, ‘Oh my God, this is the way all these other graves should have looked.

“Tutankhamun’s tomb is actually smaller than the other pharaoh’s, but it’s the only one that’s intact. So it was just shocking to see that much gold. Those two reasons on their own are enough to capture people’s imagination, but Tutankhamun himself was just as fascinating, given the fact that he was so young.

“He comes from a family of religious revolutionaries. He was a teenager and was married to his sister. In that family, there were a lot of sibling marriages and half-sibling marriages. So he was also a result of that … that’s why he looked a bit strange. That’s partly what makes the excavation one of the biggest—if not the biggest—archaeological discoveries out there. It’s not the most important one, but it’s the one that everybody remembers.”

When we sat through the screener, the first thing that came to mind was how much Ella and her disarming screen presence reminded us of … Lara Croft, tomb raider.

“It’s the tank top, I’m sure (laughs). It’s kind of funny, but to be honest, Indiana Jones probably had a bigger influence on me. But the difference is that Indiana Jones and every archeologist I know wear a hat, so I’m like, ‘I’m not doing that (laughs)!’”

Speaking of Indiana Jones, who’s often thrust into harsh environments despite his alpha-male personality, we asked Ella if she considers being female in a male-dominated profession an asset or liability. After all, we (almost) never see any woman leading an excavation to look for buried treasure.

“To be quite honest with you, there’s a lot of sexism in some of the places I go to … some of them quite violent,” Ella admitted. “Sexism is very, very, very real. So it can get a bit exhausting on that side. Also, if there is violence, violence against women can also be really brutal. 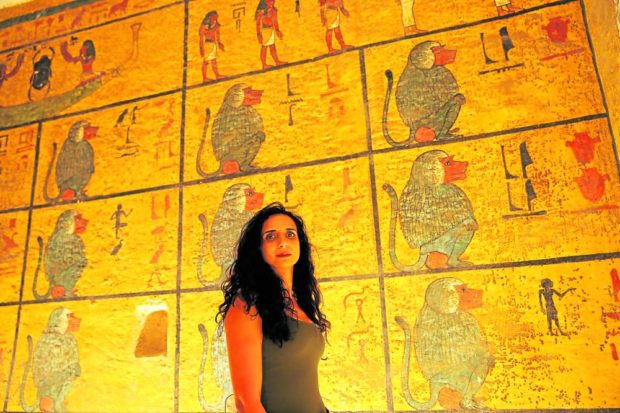 Al-Shamahi in front of wall with Egyptian hieroglyphs

“But the flipside of that is that, because I’m a woman, people don’t see me as a threat. For example, it’s not unusual for me to be the only woman in a team, so it’s different how people look at my group compared to the way they would treat another team full of men … the approach is softer. So, I wouldn’t say it’s easier or harder—it’s just complicated.

“But I do think there are advantages, and I definitely use that to my advantage. So, I will sometimes be the one asking the [harder] questions. They see me as a woman. I’m tall, but I’m a woman. So they go, “OK, maybe she’s not a threat.”

Science and comedy certainly make strange bedfellows. But how does comedy figure in Ella’s multitasking endeavors? And which of her two passions outweighs the other?

Ella answered, “Oh my gosh. Yes, comedy is partly a coping mechanism for me. I just find constructing jokes so intellectually stimulating. It builds your confidence. When you’re onstage and you ‘get’ the audience, it’s truly something else. I just find the whole thing ‘delicious.’

“Science can be funny, I will say that. So, it’s hard to say which one is more satisfying … it really depends on my mood. But if you hold a gun to my head, I would give up comedy … but that would make me very, very sad!”

We also asked Ella who a treasure would belong to after an explorer like Howard Carter digs it up. Does he get to go home with all of the loot?

“Things are very different then,” Ella pointed out. “When you find something these days, you have to follow the laws of the country where you found it. Back then, the Brits took quite a bit … it was just a much more complicated arrangement.

“I’ve heard a lot of rumors about Carter maybe keeping some of the stuff that he found, but I’m not really sure about the whole background to that. People would think that when you discover something, you get to keep it. But it’s not quite right. Most people think that the really big challenge is if you’d rather tell the world about it than keep it to yourself. 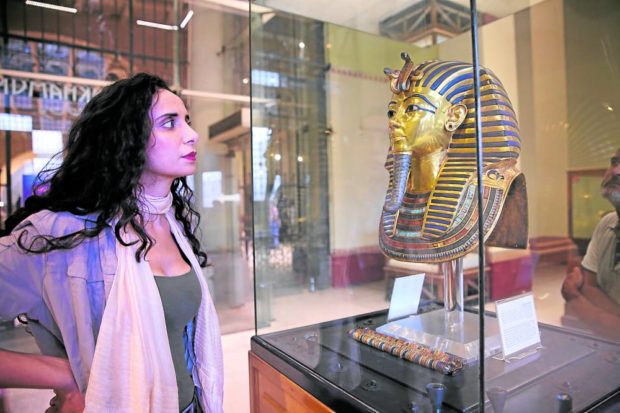 With the mask of Tutankhamun

“But it’s not just about the treasure you found … it’s more about the knowledge that should be shared with everybody. Knowledge should belong to everyone. If you keep it, that means the rest of the world won’t get to see it, study it or learn from it, right?”

Why are people still interested in studying the past. And in what way does an examination of history help shape the future?

Ella mused, “It’s important for us to see our own evolution and let that help explain how we got here. Like, me and you are sitting here on the craziest bit of technology. I mean, if we told our parents when they were born about this conversation we’re having over Zoom, they’d be like, ‘Huh?’ History and the stories that come with it are just interesting. It’s useful to understand where people come from, like with ancient Egypt.

“Let’s be honest, Ancient Egypt was simply one of the most spectacular civilizations in history. But where is it now? It’s truly humbling. We could sit here today, look at politics, and think that this is the way it will always be. But things change.

“The other thing that I like about history is, most people get their day. So today, if you look at the world, you’d think, ‘Ah, western countries are amazing or they’re technologically advanced.’ You might make the mistake of thinking that is something special about white people. But when you study history, you actually learn that Egyptians had this incredible civilization … or, at one point, even the Chinese.

“My family’s from Yemen, which is a war zone right now. It’s terrible. But war doesn’t last forever, even if it can last a long time. It’s nice to know that I come from a place that once was part of an incredible civilization. And it has warm and gentle people, too. That’s why it’s important to hold on to things like that.