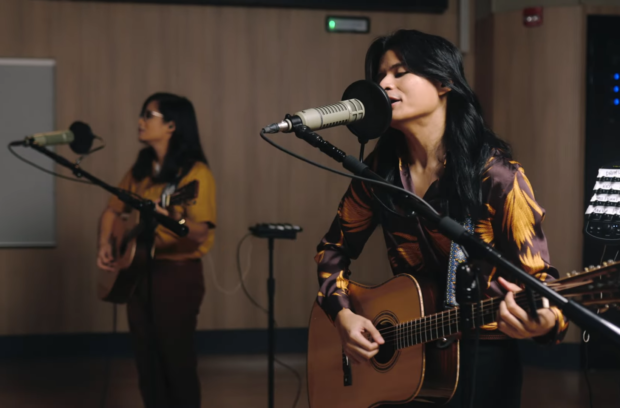 Ben&Ben in the official lyric video for “Dear.” Image: screengrab from YouTube/Ben&Ben

Folk pop band Ben&Ben again serenaded fans, this time with “Dear,” its newest romantic song which is about a love that remains sure and strong no matter what may come.

“Dear” was released on YouTube, Spotify and various other streaming platforms today, Nov. 25. The song, written by Ben&Ben’s vocalists Paolo Benjamin Guico and Miguel Benjamin Guico, was recorded at Firdaus Studio in Dubai.

“Only the two of us can understand / The sureness of our love / I promise you that I will hold your hand / no matter what may come/ my dear,” Ben&Ben sings.

Prior to the song’s release, Ben&Ben talked about the inspiration behind it while addressing fans in their Instagram post yesterday, Nov. 24.

“We hope you like it, but we hope it makes you feel loved, more than anything else. This song was written after finding the deepest kind of love at a time when it was least expected,” the band stated. “No matter how impossible it may seem, if it’s meant to be, love will find you. And when that time comes, you’ll be ready for it. It’ll quite be an adventure.”

The release of “Dear” comes ahead of Ben&Ben’s homecoming concert on Dec. 18, which will be held at the SMDC Festival Grounds in Parañaque City. The concert was supposed to take place in September, but was rescheduled due to inclement weather.  /ra