Ali Sotto on being pro-aging and overcoming grief | Inquirer Entertainment

Ali Sotto on being pro-aging and overcoming grief 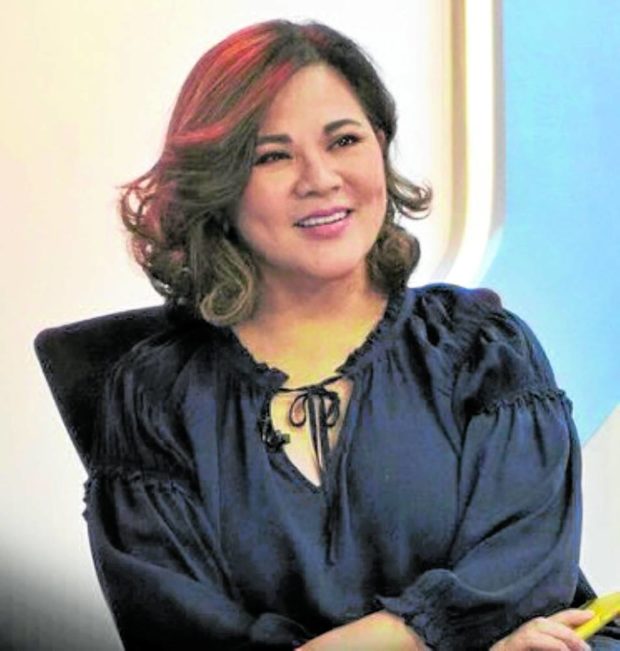 “Our generation didn’t experience the pressure that young girls have today with social media, photoshop and women like Kim Kardashian,” said seasoned broadcaster Ali Sotto, who is 61 but doesn’t look it and claims to be “pro-aging.”

“Yes, I’m all for aging because we all age anyway, right? I sympathize with young girls. These days, when I look at photos of myself when I was in my late 20s or early 30s, I see a thin girl with really long neck, but I don’t remember a time then when I thought I looked fine. I always felt that I was fat and that I had to lose weight—to think that we didn’t have the same pressure that young girls have now,” Ali told Inquirer Entertainment in a recent virtual chat.

“I kept saying in my TV program, ‘Don’t believe that being fair is better compared to being ‘morena.’ This is a relatively recent phenomenon. I first observed this when I came back after living in Mexico for three years. Billboards in Metro Manila featured facial whitening products and whitening centers started sprouting everywhere, and here I am trying to buy a face foundation that’s a bit darker than my skin,” she pointed out.

Before Ali “officially” became a senior citizen, she said she felt “extremely excited” to turn 60. She explained why: “It meant that I will finally get my 20-percent discount; and because I drive myself, I was excited because it’s always hard to find a parking spot whenever I buy stuff from the market. On the other hand, I also had some misgivings, not in terms of physical, but more on whether or not I have done enough in my life.”

She continued: “This has a lot to do with traveling, especially since we experienced pandemic lockdowns for two years. There was a delay in my plan to tick off items on my bucket list.” She added that, during the pandemic, she busied herself being a “plantita” and also tried to learn to play the piano.

Ali has just gotten back to work after a really short retirement period. She now cohosts the daily news-commentary show “Ano sa Palagay N’yo?” with Pat-P Daza on Net 25 from 8 a.m. to 10 a.m.

“I’d like to think that I was able to achieve my goals, career-wise. I also think it’s selfish to ask oneself about legacy. I kid myself not, I don’t have that kind of mentality. I mean it’s a blessing to be someone iconic like (Olympic gold medalist) Hidilyn Diaz or (World Bowling hall of famer) Paeng Nepomuceno. They’re part of Philippine history books, but for me, it’s more like, ‘Am I able to share the talent God has given me?’ In the end, we all stand before Him for judgment,” Ali pointed out.

However, Ali is too humble to point out that her legacy takes a different form. It actually has something to do with her being a mother who perpetually deals with grief over the loss of her son, Miko, who died from an accident in 2003.

Ali helped form a healing center called INA, which also means Inang Naulila sa Anak. It provides psychosocial interventions to mothers who lost their children. She said she is proud that through INA, she gets to counsel grieving moms. “I tell them, ‘When you feel like crying, just cry. Celebrate your love for your child because death cannot trump a mother’s love,” Ali stressed.

She also donated her son’s corneas to the Eye Bank Foundation of the Philippines, which eventually found two women recipients, named Jhunnalyn and Esme.

Ali said the pain of losing a loved one never really disappears. “I’m actually afraid to totally get over the grief, because, apart from the memories, it’s the raw pain that actually connects me to him,” said Ali, and then recalling the story of the evergreen tree she planted over a decade ago in Madrid, where she and her husband, retired foreign diplomat Omar Bsaies, lived for several years.

“A few months back, my husband had the chance to go back to our Madrid house and saw that the Miko tree was still there, looking so majestic. I said, ‘This is a testament of a mother’s grief. You can surmount your grief with love, and, by God’s grace, your mourning will turn into dancing.’ That’s my sentiment about grief now. The pain is still there, but its character has already changed. My journey continues, but the pain is no longer so sharp that I feel like I’m drowning,” she shared with Inquirer Entertainment.

“Knowing that I’ve made a lasting effect on even just one life means so much to me. It makes me want to keep working in media,” said Ali, who then recalled recently receiving a message from a loyal fan talking about how watching Ali has helped her triumph over the most difficult times in her life.

“I felt so exhausted this week because of work-related duties, and then I got a message like this … it’s almost divine. It’s like, ‘OK, fine. I heard you loud and clear. I, we, do make a difference, so let’s just keep doing what we’re doing,” Ali declared.