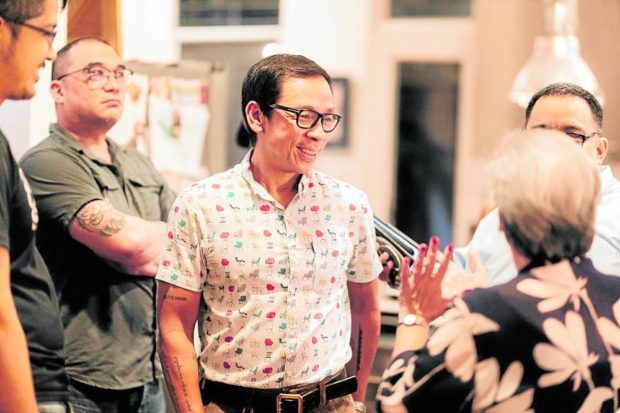 “What was supposed to be a coverage with a happy and merry tone, turned into a disaster coverage,” recalled TV host-anchor Kim Atienza, who happened to be in South Korea when the fateful crowd crush in Seoul happened on Halloween night.

“I was scheduled to tour the city to cover the Halloween parade. It was a good thing the flight of my team and I was delayed because of the typhoon. We were supposed to take off from Manila at 12:40 a.m. but only managed to leave an hour later. When we arrived there, the crowd crush was just happening. If we got there an hour earlier, we would have been in the middle of the stampede. Since I was supposed to cover it, I would obviously go to where the most people are, right?”

At least 158 people were killed and 196 others were injured on the night of Oct. 29 in Itaewon, a multicultural commercial area in Seoul.

Atienza said he felt helpless because he saw people suffering but was unable to save them. “I saw the kids die. We couldn’t do anything but just cover what was happening. What was supposed to be a soft coverage, which should have been happy because it was for the first anniversary of GMA-7’s ‘Dapat Alam Mo,’ turned into a disaster coverage. We shifted to hard news,” the TV host told Inquirer Entertainment.

Being a close call for him and his crew, we asked Atienza about his personal reflections on the tragedy. To this, he said: “That life is so fragile. One minute you’re partying—you feel young, wild and free—and the next minute, you’re gone. Most of those who died were younger than 20.”

He continued: “Life can be taken away from you anytime, so you have to be prepared. The question is not ‘when’ because we really don’t know, but ‘where will we go: heaven or hell?’ The victims were just kids. They had a full life ahead of them, but they died, just because they wanted to party.”

Atienza added that he could relate very well with the incident because his kids are currently teenagers, too. “They are of the same age as those who died in the tragedy. I know that we will all die at a certain point, but where will we go? It’s the duty of the parents now to ingrain in the minds of their kids the value of spirituality and of being Christians. That’s the challenge now. I want all of my kids to go to heaven.”

Did the incident now make him fear for the safety of his children? “Funny how my kids are so smart because of social media,” Atienza said. “There are a lot of videos circulating on how to avoid a crowd crush or a stampede, and how to survive them. My kids are actually the ones sending me links to reports on the incident. All I can do is to remind them but I cannot stop them.”

Atienza said that while his wife felt worried about him, “she was happy that I was not harmed. Knowing me, she was afraid that I’d actually go inside the area,” said Atienza in a post-event interview during the recent Inquirer Read-Along Festival, of which he is an ambassador. Atienza read Augie Rivera’s “Bisnesboy Minggoy” to some 60 school kids via Zoom.

Meanwhile, Atienza’s “sexy photo” went viral recently. It was an old picture of his on the beach with his family. People were complimenting him on how he has managed to maintain a good physique and healthy lifestyle through the years.

“I was surprised with the netizens’ reactions. I’ve already posted that photo several times. I realized that every good photo has its own time to go viral,” he said, laughing. “I guess people took notice because I’m older now and they are not expecting me to appear the same way I looked before. This probably surprised them. I’m turning 56 in January,” Atienza said in reaction to his photo becoming viral.

Atienza explained that at the time the photo was taken in the ’80s, he was part of a show called “Muscles in Motion” on Channel 9. “My body was like that in 1988, but when I joined politics in the ’90s, I totally forgot about it. I thought that the fitness and the muscles that I had would be able to sustain me. I got really focused on politics and television that I forgot about my health. That’s when I got really sick and had a stroke,” he recalled.

“In 2010, I got my fitness back. Only this time, I did a lot of cardio and participated in triathlons. Now, I’m back to lifting weights again,” Atienza said. “Now, my body is like how it was before, but better. In the ’80s, mass was ‘in,’ so my idols back then were bodybuilders Lou Ferrigno and Arnold Schwarzenegger, both winners of the Mr. Universe title. Today, it’s different. Bodybuilding now is more functional. The exercises I do at the gym are designed to make me function better, as an older person. My muscles now are not massive, but are more ripped.”

Last week, Atienza hosted a get-together for members of #TeamNOEL, the talent management group he belongs to. Headed by Noel Ferrer, the group gathered for the first time since the pandemic and celebrated recent victories, infanticipating, weddings, engagement, network transfers and awards, as well as welcomed new members. INQ

Read Next
Bea Binene hopes to do more hosting aside from acting
EDITORS' PICK
House energy committee chair Arroyo bats for cheap electricity
Fare card prices soar amid shortage
The vivo Y16 makes the season of giving more thoughtful for the whole family
US has ‘many requests’ on Edca, Bongbong Marcos says
Bongbong Marcos: Oil search in West PH Sea may skip ‘gov’t to gov’t’ talks
The Best Tech Gifts For The 2022 Holidays
MOST READ
‘Queen of Kundiman’ Sylvia La Torre dies at 89
SSS: Pensioners 13th month, year-end benefits to be released first week of December
US has ‘many requests’ on Edca, Bongbong Marcos says
BIZ BUZZ: Tugade move reversed
Don't miss out on the latest news and information.