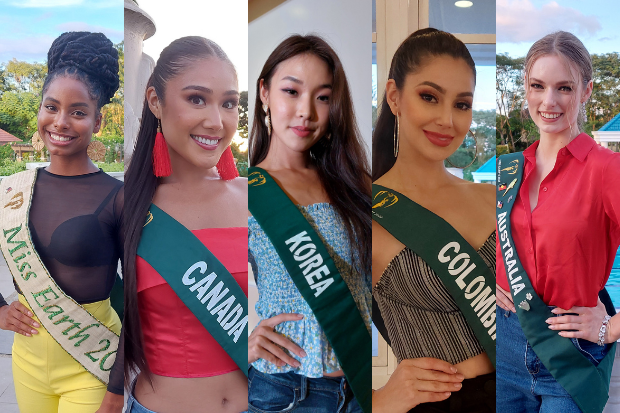 MANILA, Philippines—The 2022 United Nations Climate Change Conference, more commonly referred to as COP27, is culminating today in Egypt, and the Miss Earth 2021 winner and delegates to this year’s pageant shared their thoughts on the decades-long initiative of the body of nations.

Reigning Miss Earth Destiny Wagner, of Belize, said that if she were only given a chance to speak during the conference, she would “highlight the natural disasters” because her country was recently hit by a hurricane, but was unable to handle it even if it was only Category 1.

“Belize is one of the smaller nations there. So when bigger countries are polluting or throwing their trash into landfills and into the sea, the smaller countries are the ones that are affected by it, and in doing so we increase the chances of natural disasters,” she told the Inquirer at the pageant’s welcome dinner hosted by Versailles Palace in Alabang, Muntinlupa City, on Nov. 6.

Australia’s Sheridan Mortlock would want the leaders to train their attention to “unnecessary” single-use plastics. “I say unnecessary, I want to highlight that, because we still need single use plastics in things such as hospitals and nursing for health,” she said.

The student of global sustainability and politics continued: “Things such as takeaway cutlery or, for example I’ve seen groceries plastic wrap fruit and vegetables that does not need to be plastic wrapped, even bananas, which come in their own natural bag, that’s just totally unnecessary and we can get rid of it straight away.”

For Canada’s Jessica Cianchino, she would encourage the leaders at COP27 to incorporate mental health in drawing climate-change measures.

“What is close to my heart is ‘eco therapy.’ So I will try to implement more green spaces in medical institutions, in hospitals, in buildings. Because I think that the connection between humans and nature is so vital to our health,” shared the Filipino-Canadian candidate who finished third in the 2019 Miss Asia Pacific International pageant.

Mina Sue Choi of Korea appealed to the leaders who gathered in Egypt to take advantage of the existing technology, and current knowledge to address climate change.

She also encouraged partnerships between the government and businesses for solutions. “And I think as Miss Earth Korea, I’m also like an environmental activist. It’s my role to influence the most I can,” she added.

Colombia’s Andrea Aguilera, meanwhile, defended the relevance of such conferences, even if the world is already facing a climate crisis despite three decades of action from the United Nations.

“Unfortunately, climate change has affected us for a long time, and we just started to be responsible for this problem in the last 30 years. So we have a very, very bad situation because of the time we didn’t take action,” said the 2021 Miss World Top 13 finisher.

For Wagner, the United Nations and other bodies must continue discussing climate change and other environmental concerns. “It’s just about bringing awareness and countries together and letting other countries know ‘hey, this is what we’re doing well, and it’s working in my country so maybe you should implement it as well,’” she explained.

She will relinquish her crown to her successor at the 2022 Miss Earth coronation program at the Cove Manila pool club of Okada Manila in Parañaque City on Nov. 29.

This year, American-Filipino psychology student Jenny Ramp of Tarlac is representing the country in the annual pageant.  /ra