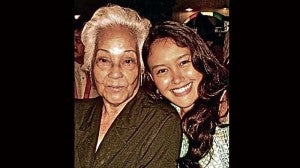 THE DRAMA icon (left), with the author

MONA Lisa, my grandmother, turned 90 last week. As expected, she refuses to be bothered by any grand celebration, just as she has refused to attend family get-togethers and ceremonies honoring her. So, I know that for this milestone, there’s no other gift I can give my Lola Gloria than sharing with the world what she has so intimately shared with me: Her life story.

Writing her biography took me years—but, I clearly remember the day I decided to do it. I knew why I needed to write it—it wasn’t to extol her gifts as an actress or her reputation as a dramatic icon. It went beyond that.

I was 19 then, and she was 81. I sat in her living room, sent over by my mother, because I had too quickly turned into this woman who needed all the “mothering” I could get. Whenever required, Lola Gloria would readily dig up the ugliest of her stories and offer them to me as some source of strength—and, she has quite a repertoire!

I was already acquainted with her stories at the time, though for that afternoon, she decided to tell me again the story of how she was once chased out of the house with a knife.

I had already heard this before, and it might sound cold-hearted of me as her grandchild, but her old stories hardly stirred me by then.

Lola Gloria was never melodramatic. She told her stories like she read them from a withered pocketbook. She easily recounted her pains with a chuckle and a shrug—and I had never seen her do it otherwise.

That afternoon, however, for the first time, I would hear her story told differently. She started off as she always did, telling me how she was well into her pregnancy with my mother when she had to run down the street in her underwear. The neighbors were out, and they all saw her embarrass herself.  She spoke in her usual I-have-been-through-hell-and-back-again tone, and I listened politely—until suddenly, startlingly, her voice broke.

I had never heard this version before—this trailing off, this brokenness. Apparently, there was a side to it I had never known. It shook me that Lola Gloria couldn’t go on telling it. She cracked. I was scared of what had been revealed to me! I heard it in her voice and was seeing it in her eyes—glinting tears. 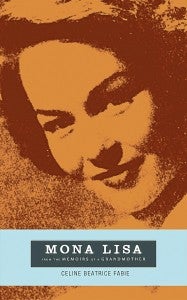 She wiped them off immediately. When she spoke again, her voice was weaker than how I had always known it to sound. It was an unfamiliar sound, and it was painful to hear. It was unreal to me, this sudden weakness. I had never seen her vulnerable and wounded by a bad memory.

As she tried to compose herself, I shrank in my seat. I could hardly look at her anymore. At that moment, I realized something that I had been ignorant about all those years, being the granddaughter who had admired her so much all my life. I realized that she could not have been born as the strong woman she had always been in my eyes. Before me, there were abandoned dreams, abusive men, hunger, war and fears.

The book, “Mona Lisa, the Memoirs of a Grandmother,” is my journey in discovering who my Lola Gloria really was, in all her veiled weaknesses. It is for a grandmother’s tears that too suddenly betray the fine actress behind the character she had only been forced to take on. For all our mothers—the days they stubbornly refused to cry, and the times their ringing laughter did not sum up anything special. For our constant attraction to pain and love.

Mona Lisa’s stories are for tracing the fine line between the graceful glamour and the cynical circus of life that keeps us awake and constantly on our feet. For the lights, the cameras, and the actions we take and can never again escape. For dreams that die and lives that go on—but, more importantly, for the great artists who can make it look like the other way around.

For a woman’s beauty that is often mistaken to be associated with dignity. For the distasteful bitterness on her tongue, the stains on her hands, the weight on her shoulders, the insanity in her blood, the ghosts in her mind, and for every unknown story beneath her shield and saving grace, her mask, and her life force—which no woman should ever be left unarmed with—the lonely, tempting, and deceptive Mona Lisa smile.