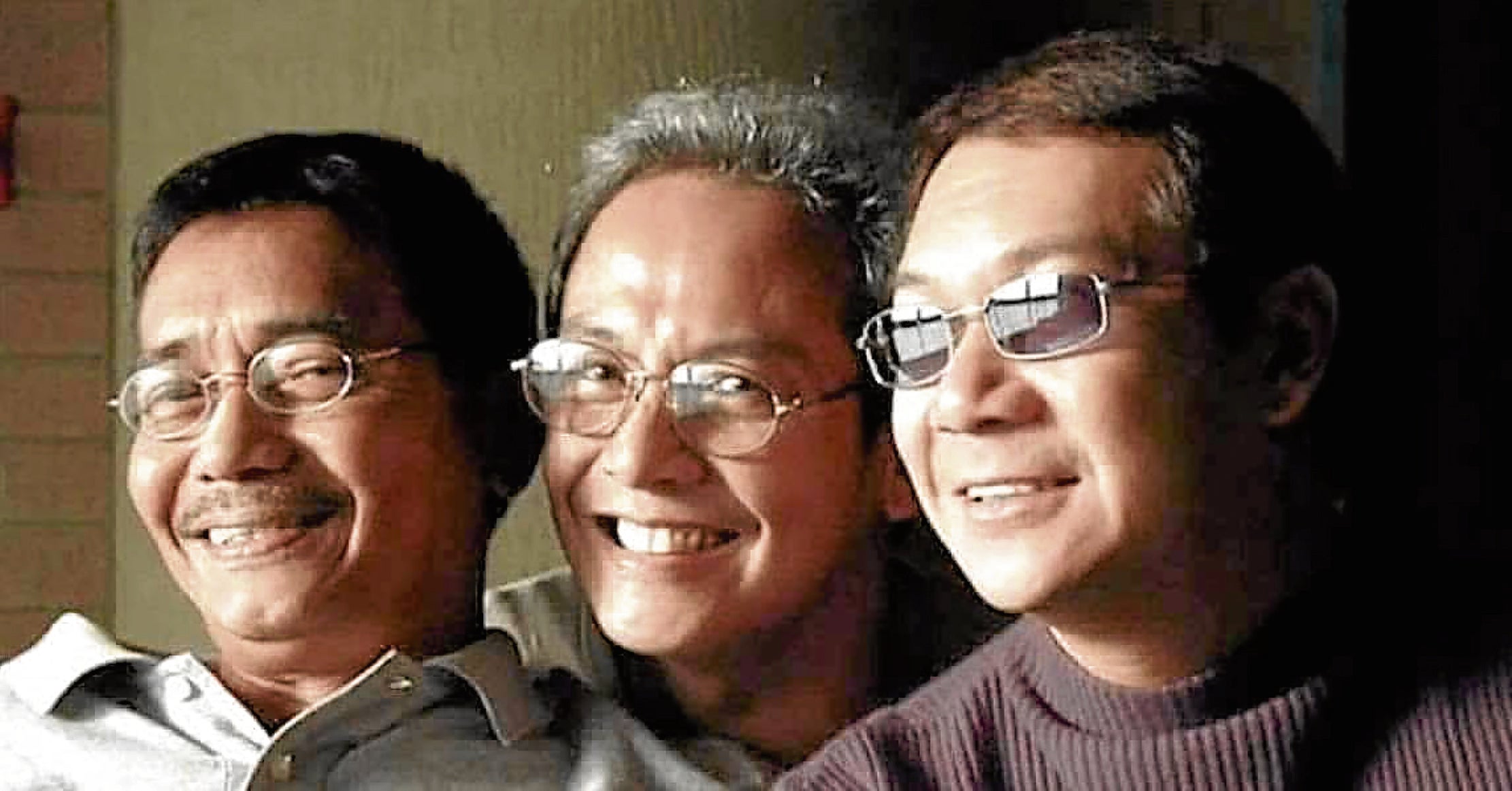 The songs of Apo Hiking Society are part of the soundtrack of every Pinoy’s life. That’s why the demise of one of the iconic trio’s members, Danny Javier, caused national mourning.

During my high school days in Maryknoll, we felt giddy when news spread that Danny was dating one of the campus crushes, Trina Francisco, while Mark Gil was courting another Maryknoller hottie, Bing Pimentel.

I also remember when Danny gamely jammed with my fave band, True Faith, at its gig in Metrowalk. Hearing him sing his composition, “’Di Na Natuto” live made my heart somersault. That hit song of Gary Valenciano is the anthem of love fools comme moi.

Thank you, Danny, Jim (Paredes) and Boboy (Garovillo) for being an interpreter of love’s various languages through your timeless hit songs.

Even though Danny has died, Apo’s music lives on and on. (Super thanks to Jim for accommodating me, even if he’s still in mourning.)

Here’s my chat with Jim:

What are three things not too many people know about Danny? He is four years older than Boboy and me. The three of us didn’t pass auditions for Ateneo Glee Club. Danny was a painter.

Which Apo song was Danny’s favorite? He liked to sing the hits because they got audience reaction. One of my faves and his was not a big hit, “Wala Na’ng Hahanapin Pa.”

What will you miss most about Danny? I will miss his hand on my shoulder when we talk, his excitement when he presents a new song, and his humor. Traveling with him. Watching him do funny, spontaneous spiels onstage, and ending a show where we hold each others’ hands and jump high up onstage before we exit. Listening to him tell stories offstage about being mistaken for Basil Valdez and other people.

If you would write a song about Danny, what will the title be? I don’t have a title yet. I would probably want to write a few songs about the hungry years and funny episodes in our lives.

What’s the biggest lesson Danny taught you? I learned a lot from him during happy moments and also in rough times. I learned that fame, money and influence are all fleeting. I also learned that the most important mission in life is to love. In the end, only the love you give will live beyond you. 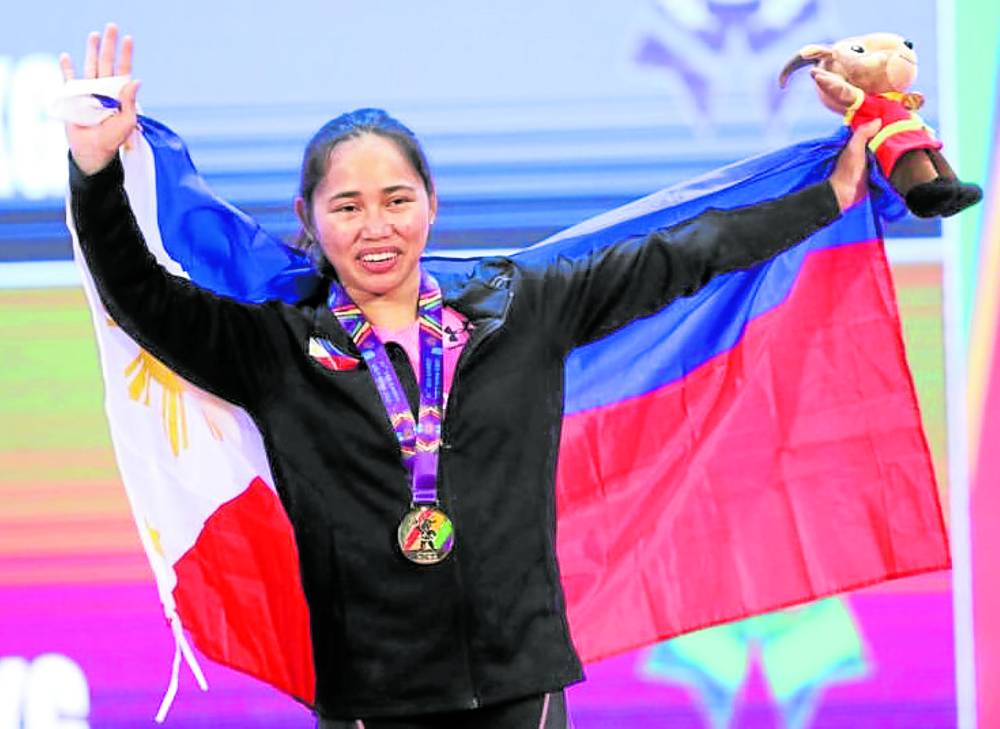 What a thrill it was to meet Hidilyn Diaz at the Ginebra San Miguel event. She has no airs at all. Our Olympic champ gamely posed for selfies with everyone. Just like how she stands firmly while weightlifting, she keeps her feet on the ground, even as she continues to soar to greater heights.

I asked Hidilyn when she and her hubby Julius Naranjo plan to have a baby. “After the 2024 Olympics in Paris,” she quipped.

According to her manager, my dear “kapatid” Noel Ferrer, she is preparing to defend her thesis in the College of St. Benilde, where the Olympian is taking up Business Management. So I chided Hidilyn, “With all your endorsements, you have a lot of capital to put up any business after you graduate.” She smiled and shot back, “But first, I have to graduate. So, wish me luck with my thesis defense.”

Even if she’s an Olympic gold medalist, a college medal still matters to her. “Hidilyncredible,” indeed.

Rob and Quinn’s ‘call of duty’

Are you willing to pay the price to get the prize, just like the rival sales agents portrayed by Rob Guinto and Quinn Carillo, who are willing to do anything to get everything in “Showroom” (SR)? Directed by Carlo Obispo, it is now streaming on Vivamax.

In order to increase their sale of condo units, Liezl (Quinn) and Susan (Rob) lure clients by sleeping with them. That’s when call of duty turns into call of the flesh.

Here are quotes from Rob (R), Quinn (Q) and Carlo (C):R: I’ve had indecent proposals, so I’m an expert already in handling it. I’m also used to bashers. I just let them keep watching as I focus on my job. I don’t care. Nakikinuod lang naman sila.

Q: I wrote the screenplay of SR based on interviews with my sales agent friends. But we don’t intend to give sales agents a bad name.

C: We hope that our film will make viewers empathize why some women resort to the sex trade. They are just victims of circumstances.

R: The controversy that Kit Thompson is embroiled in did not cross my mind during our shoot. Work is work. My love scene with Kit in SR is the wildest I’ve done so far.

Q: Prostitution is not just sex. We also sell our souls when we are slaves to a job that we are not happy doing. It’s all for the money.

C: It’s my first time to direct a sexy, daring film. It’s not as hard as I thought it would be. I made sure to respect the actors’ boundaries in love scenes.

Q: I wrote the story in a way that will make audience understand why some people resort to the sex trade instead of judging them.

C: I admire Quinn’s being fearless as a writer. She exposes things that are swept under the rug.

Sparkada artist Jeff Moses has amassed quite a following online, especially on TikTok. The 22-year-old cutie gets his baptism of fire in GMA 7’s dramaserye, “Abot Kamay na Pangarap” (AKNP).

True to the title of Jeff’s series, success for him in showbizlandia beckons.

Here’s my chat with Jeff:

What sets you apart from other social media influencers? I’m a perfectionist and an honest content creator. When I’m tasked to create content, I search for reference online for product information. Then, I identify my objectives to be on track towards work. I’m open for feedback. I treat my fans as friends, and I value their input.

What’s your advice to aspiring content creators? Never stop learning. Be innovative. Just be you. No one can recreate you but you.

What have you learned while working with Carmina Villaroel and Richard Yap in AKNP? Since Kuya Chard and I are both Bisaya and he knows I’m a newbie, he told me, “Antos lang sa,” or in Tagalog, “Tiis muna nang kaunti.” He said that I will eventually get used to the way it is in show biz.That made my jitters vanish. I admire Ms Carmina’s punctuality and generosity. Aside from buying food for us on the set, she also exerts extra effort in our scenes to guide me. INQ