Dolphy’s senses are improving, prompting his doctors to temporarily stop the dialysis treatment to give the ailing King of Comedy some rest. Video by INQUIRER.net’s Noy Morcoso III

MANILA, Philippines–Comedy King Rodolfo “Dolphy” Vera Quizon, who remains in a “critical condition,” “smiled” for the first time since last week and was observed to be “more responsive and active” Tuesday, his family said. 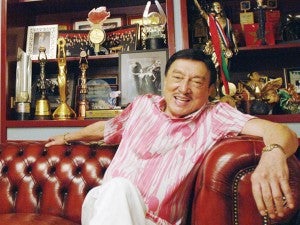 Speaking for the Quizon family, Eric Nubla Jr., head of patient relations of the Makati Medical Center where the comedian was admitted two weeks ago, said that while the manner of the smile was not specified, Dolphy’s physical senses “seemed to be heightened.”

Nubla said Quizon also became ticklish and can now feel pain, “a good sign” which implies that his bodily functions are improving compared to the days when he was not responsive.

“He can also feel pain now and it shows from his facial expression and movement from time to time, that’s a good sign,” Nubla said, noting that the pain was more of a ticklish feeling.

Nubla also said that Dolphy didn’t have a dialysis treatment Tuesday to give him some rest.

“Today (Tuesday) is his rest day . . . he will have dialysis tomorrow (Wednesday),” he said, but adding that his blood transfusion continued as his platelet count remains low, but with an improvement.

“His platelets have risen, but still are considered on the low levels… that is why he continued to have blood transfusion . . . Hindi pa din ang level na gusto (Not yet of the desired level),” he said of the 83-year-old patient.

Asked if Dolphy is on his way to full recovery, Nubla only said that the patient is recovering but said that it is hard to quantify its totality.

“Like they say, critical but stable and its one day at a time, madami syang problema e (he had many problems),” he said.

As to visits, the patient relations official said that the system was made “stricter”, not really because of the incident Monday when a photographer tried to take a picture of Quizon without permission, but “primarily because of health risks” and  the request of the family for total privacy.

“For visitors who wish to see him [Dolphy], please contact family members for clearance. Thank you for your understanding,” Nubla said, adding that they don’t want to compound Dolphy’s current problems.

“To begin with, ICU (Intensive Care Unit) is a restricted area. And you must understand [that] usually, family members [only]. And even family member is restricted to a certain number,” he added.