Smart, the Philippines’ fastest and best mobile network as recognized by Ookla, was on the ground and in on the action as Korean supergroup Seventeen brought their epic SEVENTEEN WORLD TOUR [BE THE SUN] – MANILA  to the MOA Arena last Oct. 8 and 9.

Tickets to the event were sold out in minutes, both offline and online, for Seventeen’s first concert in Manila since February 2020. To bring back the epic live experience to Hallyu lovers, Smart and Viu, PCCW’s leading pan-regional OTT video streaming provider, were at the MOA Arena to make the two-night concert experience more memorable for Carats. 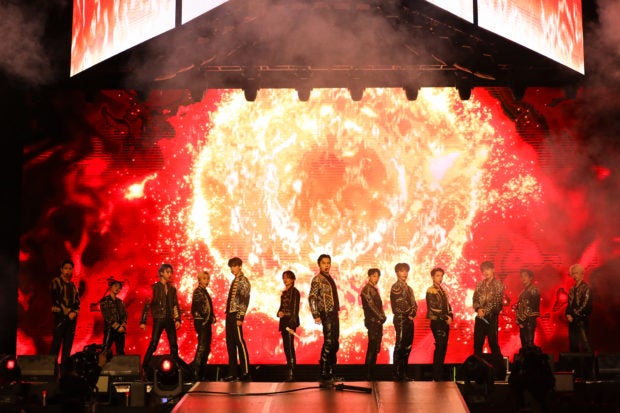 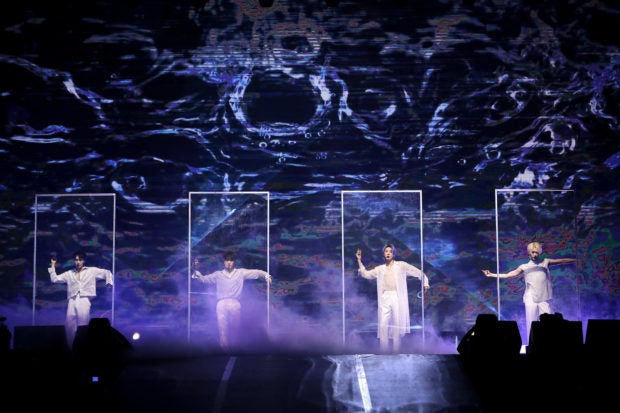 With Power All 99, subscribers enjoy 8 GB for all sites and app, Unli TikTok, and Unli Texts to All Networks for 7 days, giving them the power to do all they want online.

Moreover, during the two-night concert, Smart provided tents for the strapping and merchandise booths outside the MOA Arena so that concertgoers would have a roof over their heads while waiting in line for their turn.

Carats visited the Smart Experiential booths located at the ground and second floors of the Mall of Asia Arena during the concert days where they felt the Power of Smart. They posed for pictures and got to bring home concert souvenirs and exclusive merch like sticker packs and Carat-bong lanyards. 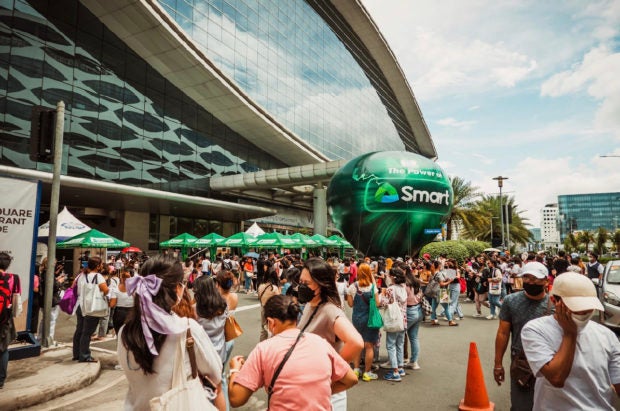 CARATS in full force at the MOA Arena.

Carats also joined the Powered Up SVT Quiz to show off how well they know Seventeen, which is composed of S.coups, Wonwoo, Mingyu, Vernon (Hip-hop Unit); Woozi, Jeonghan, Joshua, DK, Seungkwan (Vocal Unit); Hoshi, Jun, The8, and Dino (Performance Unit), by answering 10 questions about the group. With Powered Up Rhythm, Carats also got to play a game of SVT Rhythm through Rhythm Hive to claim an Instax printout. 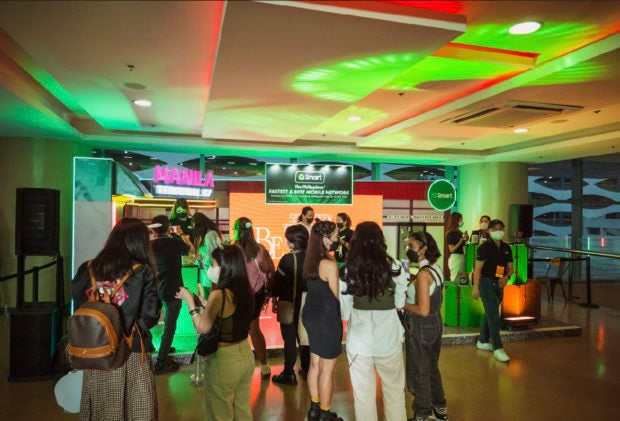 SMART subscribers line up for freebies at the MOA Arena. (Smart)

Those who had the Smart GigaLife App on their smartphones also got to strike a power pose at the Smart SVT Booth on the ground floor to get a Powered Up Holographic Memento.

“I loved the holographic photo with my best friend. Even if we aren’t seated together for the concert, as we’ll be in different sections, we have this photo to remember this special day,” said Gail, a university student who’s been a Smart subscriber since 2020. She switched to Smart during the pandemic for her online classes because of the network’s strong signal and good offers. 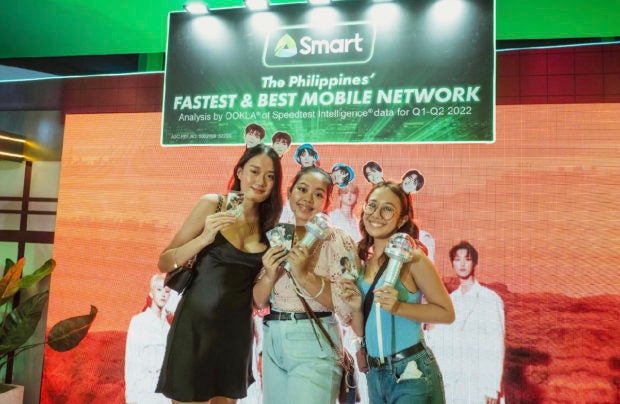 Lucky Smart subscribers at the [BE THE SUN] concert.

Sharon, on the other hand, got her concert ticket from her mom, who redeemed it on the Smart GigaLife App. “She’s a Hallyu fan who loves Korean dramas and she has the Smart GigaLife App so she can watch the online fan meetings of her favorite Korean actors like Park Seo-joon and Hyun Bin.

Another subscriber, Dexter, watched the concert with other Carats. He said he enjoyed the games and activities at the Smart booths. “I am a Smart Prepaid subscriber and I always use my Smart phone to book rides in crowded places such as the MOA Arena after concerts. The signal is always strong and consistent.” 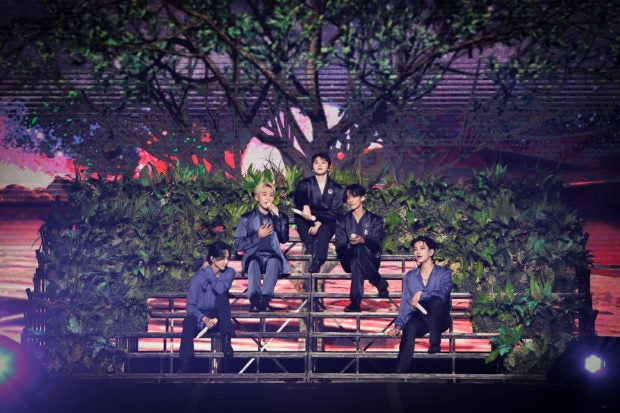 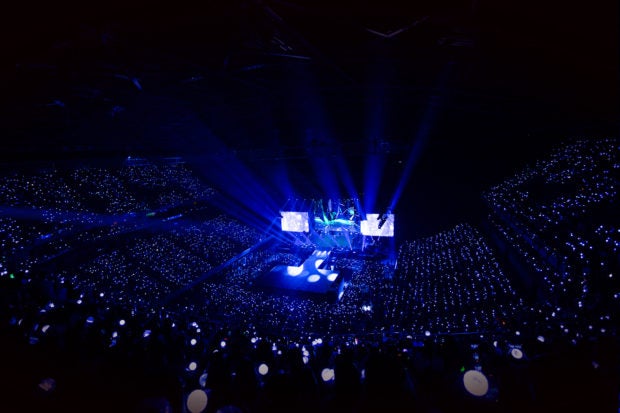 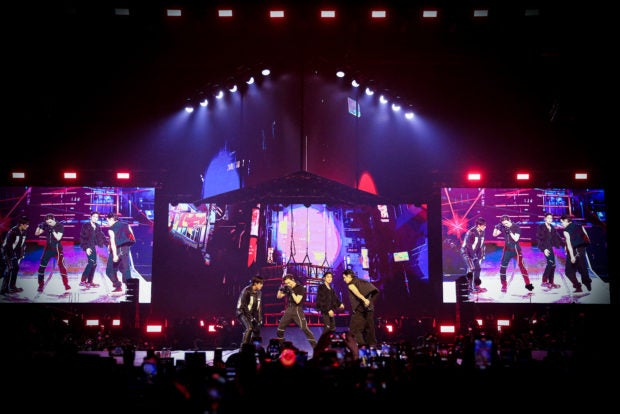 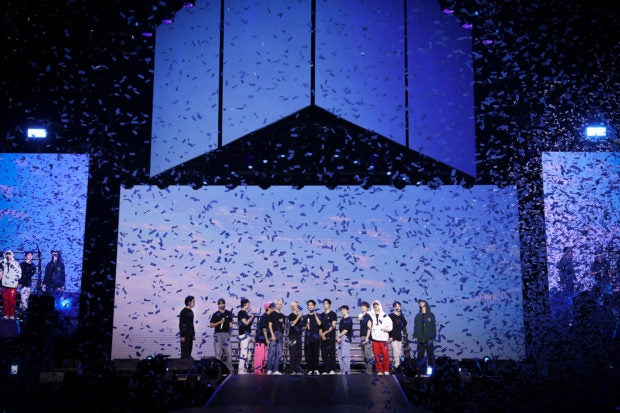 Enjoy the best K-Life experience with Smart! Watch out for more epic concerts and events by following Smart on its official accounts on Facebook, Twitter, Instagram, and TikTok. #SmartViuwithSeventeen.