Forever good as gold: JAY B of GOT7 fires up PH in solo show | Inquirer Entertainment

Forever good as gold: JAY B of GOT7 fires up PH in solo show 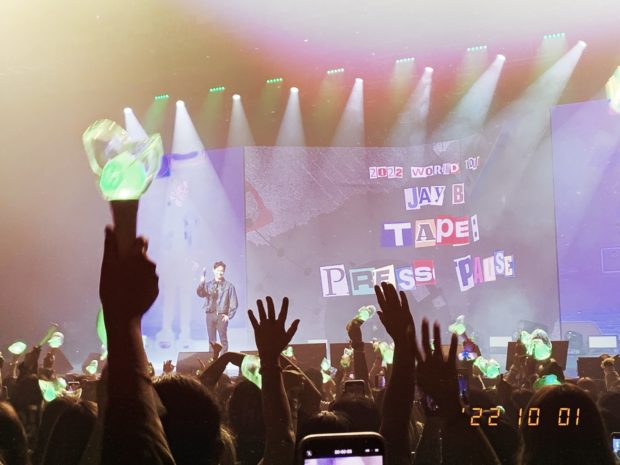 Ask anyone lucky enough to witness the nearly three-hour show at the New Frontier Theater at the onset of October, and they would all say the same thing: It was a night like no other.

Im Jaebeom, the leader of globally revered South Korean act GOT7, launched his “Tape: Press Pause” 2022 World Tour with a much-awaited stop in the Philippines. The concert also marked his return to the country in almost three years, the last being his group’s Manila stop of their “Keep Spinning” world tour in 2019.

JAY B opened the show with his 2021 single “Switch It Up,” making his blue-lit entrance in a sleek leather jacket. It was the perfect kickoff for the night as he immediately displayed his unparalleled talent and charisma, leaving Ahgases (GOT7 fans) begging for more.

The beloved idol built upon his strong introduction with a slew of hits from his repertoire, including “Dive Into You,” “Hush,” “Sunset With You,” and even “Fade Away” from JJ Project’s fan-favorite album “Verse 2.” JAY B also did a surprise performance of “Hello 2.0 (Legends Only)” with renowned Filipino act James Reid.

With his spot-on dance moves and incredibly stable vocals, it’s hard to think that JAY B had just arrived from Paris, France, before the show. What he brought to the stage that night proved how insanely talented he is.

JAY B: “What do you think of me?”
James Reid: “Ang gwapo niya, ‘no?” #JAYBinMANILA2022 @jaybnow_hr pic.twitter.com/CsDTvKOeVo

Perhaps the most awaited moments came from his second mini album, “Be Yourself.” Released just last month, the six-track extended play (EP) is headlined by the title song “Go Up” and serves as his official follow-up to the R&B-infused EP “SOMO:Fume.”

When JAY B asked the crowd which songs they wanted to hear, most of the fans—at least from my side of the venue—asked him to perform tracks from his latest mini album. In particular, his “Go Up” and “Livin” stages became one of the night’s highlights.

The night went into a nostalgic dive when a fan project created by GOT7 Noonas PH started playing, taking JAY B by surprise. It consisted of clips of JAY B with his fellow members, with the sentimental track “Fountain of Youth” adding to the moment.

At the end of the video, he took a bow as his fans showered him with cheers. JAY B said the video allowed him to remember that he was GOT7’s leader; for everyone in the crowd, it reminded us of why we are fans of the beloved septet.

Had to cut some parts out due to Twitter limitations, but here’s the video! https://t.co/c2cixcZPiV

Then came his emotional performance of “Rocking Chair,” which my friend, a fellow Ahgase journalist who saw JAY B’s show in South Korea, told me to prepare for. While his more rigorous routines show his stability, JAY B’s vocal prowess especially shines in stripped-down performances.

To everyone’s delight, JAY B also performed a GOT7 medley at the end of the show, saying it would be a waste not to perform their songs.

It was one of the best shows I’ve ever seen—and I almost missed it due to my indecisiveness. Being a member of the middle class, I wasn’t sure if attending the concert would be a wise thing, given the inflation-riddled system we have right now. But my friend, who convinced me to give it a go, told me that experiences like this don’t come often.

So I invoked destiny and left it to chance. I told myself I would go if I could still score a ticket the day before the show.

I guess the universe heard me because when I went to ask the cashier if there were still available seats in my preferred section, she told me there was one ticket left. Perhaps it was meant for me.

What I love about JAY B is the way he leaves it all on the stage. He loses himself in the music. His passion is catching, his talent spellbinding, and his authenticity inspiring. That night left everyone fulfilled and wanting more: There was no ending for him, and we, too, wished the moment lasted a little longer.

To tell you the truth, I’ve found it difficult to follow the boys’ journeys as closely as I want. Life is catching up with me, and my commitments don’t fully allow me to be a fan, let alone enjoy my youth. But for a night, I was able to hold my Ahgabong (official light stick), sing to some of my favorite songs, and be a part of something special.

In a time capsule message for Ahgases in 2019, JAY B expressed his hopes that we would hold on to the moments we spent with him and the group, even in times when we are unable to fully support them. “I hope we all live gratefully while these times remain somewhere in our hearts,” he said. That’s exactly what his solo concert means to me. 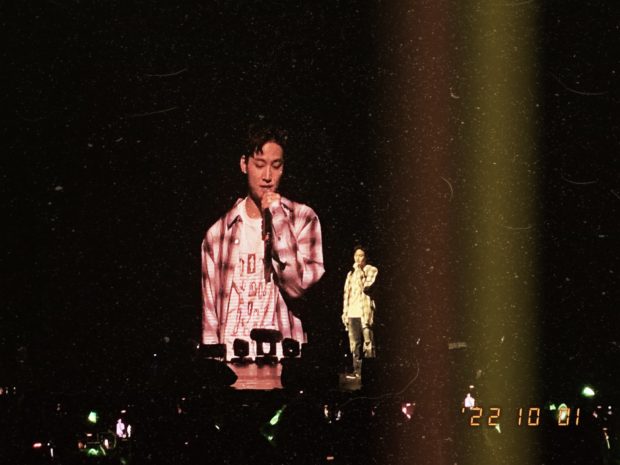 For GOT7, this year is all about flying back to where they belong. JAY B came home, and so did we.

To the best leader, thank you. EDV

Jay B of GOT7 frees up more for 2nd solo EP