Dolphy still a comic even on sickbed 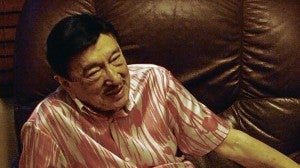 MANILA, Philippines — If laughter is indeed the best medicine, then actor-comedian Rodolfo “Dolphy” Quizon seemed to be taking a full dose.

“Nag co-comedy pa eh [He’s still a comic]. No dull moments. kahit may sakit na, naka comedy pa [even as he is sick, he still manages to be a comic],” said one-time TV sitcom partner and actress Nova Villa who flew in from the US early Saturday to be with him.

Villa, who went straight to Makati Medical Center from the airport, told reporters after her visit that her friend was awake and responding to his children and visitors by raising his eyebrows or widening his eyes.

Villa, who appeared with Dolphy for more than a decade in the hit “Home Along Da Riles” (Home by the Railway), said she wanted to say, “Ano na bumangon ka na d’yan, may taping na tayo [What, wake up, we have a taping].”

Villa said she was moved by Dolphy’s condition as she looked at him from the viewing area of the intensive care unit. But she added that the comedian looked “happy.”

She said in Filipino that Dolphy also seemed to still possess “a sharp mind, he can see and he smiles”.

“Nahabag ako sa kondisyon ni tito Dolphy [yung] inabot niyang sakit. Masasabi ko let’s all pray for tito Dolphy for his speedy recovery,” she said of the actor who has been suffering from chronic obstructive pulmonary disease (COPD), which results in difficulty in breathing.

She said she made Dolphy’s children tell their father that “Oh, si tita Nova nandyaan.”

Villa said she wasn’t able to see Dolphy for quite some time because of her hectic work schedule.

Dolphy’s other children, Villa said, arrived from the US and were now spending time with their father.

She said Quizon’s partner, actress Zsa Zsa Padila, was there and was staying strong and keeping her faith that her love would soon recover.