Dolphy has resumed his dialysis treatment Saturday morning and his doctors say both his heart rate and blood pressure are in normal levels, Eric Quizon tells reporters in a press briefing. Video by INQUIRER.net’s Noy Morcoso III

MANILA, Philippines—Comedy King Rodolfo “Dolphy” Vera Quizon, who remains in “critical condition”, has resumed his dialysis treatment Saturday morning after his  creatinine level went up from 1.58 to 1.83, his son said.

In a press briefing, Eric Quizon said the dialysis treatment resumed around 8:30 a.m. with both his heart rate and blood pressure in normal levels.

He attributed the increase of Dolphy’s platelet count to the platelet concentrate that is being administered to his father. 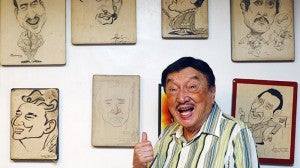 “So it’s really been a roller coaster ride for all of us so ‘pag may magandang resulta, meron ding hindi maganda,” he said, but added that Dolphy’s vital signs had remained stable for the last few days—a good sign for the Quizon family.

Dolphy, Eric said, still has pneumonia, but is now being treated with antibiotics as doctors continue to look for the origin of his the internal bleeding.

But while complications are apparently developing in some of his organs, Eric said his father’s heart is very much alive and is in a “very good condition”, citing reports of Dolphy’s doctors.

Also, Dolphy has been more responsive Saturday than he was Friday, maybe, Eric said, because his two other siblings, Mannyboy and Marikit, had arrived from the US to visit and spend time with their father.