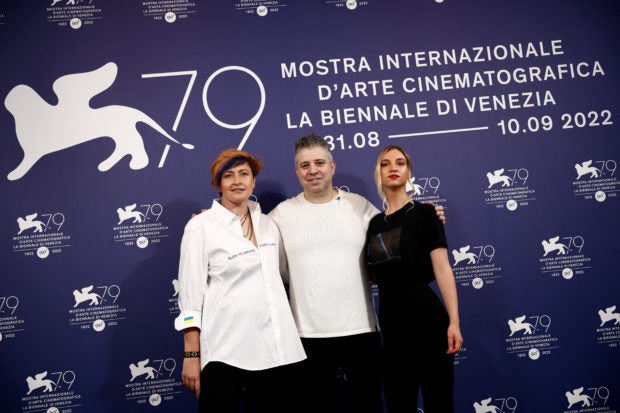 VENICE — While Venice was rolling out its red carpet for the opening of its film festival a week ago, director Evgeny Afineevsky was racing to finish his sobering documentary about Russia’s invasion of Ukraine.

He managed to meet the tightest of deadlines, with “Freedom on Fire: Ukraine’s Fight for Freedom” getting its world premiere at Venice on Wednesday, vividly depicting the impact of the ongoing conflict on ordinary civilians.

“Literally this movie was finished on the night of Aug. 30 to 31, so you are really seeing something direct from the ground of the war,” Afineevsky told reporters.

Even though battles are still raging within Ukraine, the Russian-born, Israeli-American filmmaker said it was vital to start telling stories from the war immediately.

“If today we don’t show to the world what exactly is happening in Ukraine… then we are committing a crime,” he said, warning that unless everyone stood up to Russia, it would soon look to reclaim other parts of the old Soviet Union empire.

The documentary is a follow-up to Afineevsky’s 2015 Oscar-nominated film “Winter on Fire,” which tracks the huge street protests that led to downfall of Ukraine’s pro-Russian President Viktor Yanukovich in 2014.

“We thought that was the end, but in fact it was just the beginning,” Afineevsky said.

Ukraine has figured large at Venice this year from the very start, with President Volodymyr Zelenskiy addressing the opening ceremony, calling on filmmakers to shine a light on the war.

A number of actors and directors have worn Ukraine badges, with British star Tilda Swinton going one further, her hair dyed yellow and wearing a blue top in honor of the Ukrainian flag when she held a news conference on Tuesday.

On Wednesday, the cast and crew of another Ukrainian film showing at Venice, “Luxembourg, Luxembourg,” used their Lido photo call to show their support for their compatriots.

“Since the beginning of the Russian invasion, thousands of Ukrainian children have been left without parents,” said a banner they unfurled for assembled photographers.

One of the protagonists of “Freedom on Fire,” journalist Natalia Nagorna, said it was surreal to be in picture-postcard Venice, after months reporting from the Ukrainian frontline.

“You feel like you are on a different planet, where people are happy and where people are convinced the war will never reach them. We had beautiful cities too in Ukraine until they were destroyed by the Russians,” she said. JB