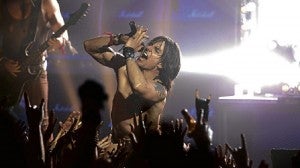 WHEN Tom Cruise took a deep breath and announced last year that he was playing glitter rock “god,” Stacee Jaxx, in the film version of the hit stage musical, “Rock of Ages,” he made eyebrows fly up to stratospheric heights.

Creative stellar “mojo” was great, but this was too much of a stretch for the middle-aging star—and he could end up with egg on his face!

But, the A-list star persevered, and laid his entire career on the line as he rehearsed his musical numbers for the film—and learned how to use his body in new, serpentine ways, by way of moves that looked like they were inspired by the sinuous rock routines of Steven Tyler and company.

Last week, the result of all that on-cam and behind the camera work was finally on view as “Rock of Ages,” the movie musical, hit local screens. —And, the verdict? The Cruise missile has hit the bullseye!

His portrayal of Stacee Jaxx is the most impressive characterization he’s ever come up with in his decades-long stellar career. Bully for him for turning a possible disaster into a personal triumph, through sheer dint of daring, gumption and cojones—plus months and months of hard work!

Cruise doesn’t get to do many rock numbers in the movie, but he makes each one count as he channels the raw, “flaming,” antsy-pantsy performance style of aging but still raging rock icons—spoofing them to death, while at the same time honoring their ethos by hitting all of their high notes and gravelly grooves.

On the debit side, Cruise’s “shocking” act eventually feels a mite too repetitive and self-mocking for viewers to really empathize with his wild and woolly character, who for the most part remains a crazy “force of nature” creation, instead of emerging as a human being.

The film is also too “overpopulated” with stars of all sorts and stripes, so character focus and highlighting are major problems. For instance, Catherine Zeta-Jones comes on strong as an antirock crusader, but isn’t given enough screen time for her portrayal to go beyond colorful caricature.

The stellar exceptions to this are Russell Brand and Alec Baldwin, who score plus points and punctuation marks (!!!) as a gleefully gay tandem.

Too bad for the new stars in this production, but they’re thoroughly upstaged by the more experienced competition, who come up with “go for the jugular” portrayals—and take no prisoners.

On point of staging highlights, the runaway showstopper in the movie is the series of sequences and musical numbers set in a dance and grind joint, the alarmingly pliant and compliant denizens of which look like they have earned PhDs in Pole Dancing!

All told, however, “Rock of Ages” ends up as too much of a mish-mash of diverse elements that don’t come together as an integral story and production. It has its strengths, like Cruise’s corrosively compelling portrayal, but artistic unity isn’t one of them. This “Rock” rumbles—but sadly, it also crumbles.