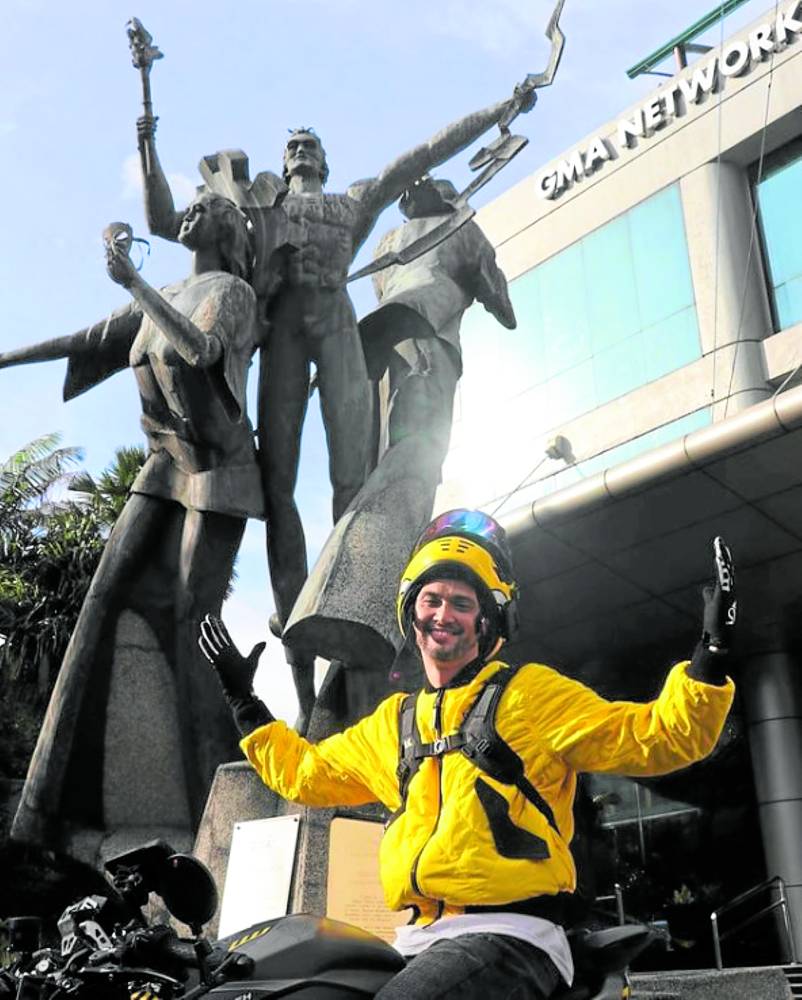 It was a throwback to his childhood.

Billy Crawford recently visited the GMA 7 headquarters for the promotional shoot for his new game show, “The Wall Philippines.” And seeing his old stomping grounds hit him with a wave of nostalgia.

“It was closed when I was there, but I saw the spot where we used to rehearse for ‘That’s Entertainment’… It was my home when I was 4 years old,” Billy said of the iconic youth-oriented variety show, which gave him his first big break as a child star in the late 1980s.

The program was created and hosted by the late German “Kuya Germs” Moreno, whom Billy looked up to as a mentor and father figure. Billy also got the chance to visit the seasoned television host and starmaker’s old office. It was his first time setting foot in it, but for some reason, he still felt a sense of familiarity.

“When I saw the office, I immediately knew why he chose that room—because it had windows with a nice view. I felt his presence there. Some of his jackets and memorabilia were there. It was an emotional moment for everyone there,” he said in a recent virtual conference for “The Wall PH,” which airs on Sunday afternoons starting Aug. 28 on GMA 7.

To this day, the 40-year-old celebrity carries with him lessons he learned from the “Master Showman.”

“No matter how hard the job is, he will be there. He was the one who fed and took care of us. He was like a clown who always felt the need to make people laugh and make the environment lighthearted. And that’s something that stayed with us,” he said. “I had a nostalgic feeling. And I knew his presence and guidance remained.”

A coproduction of GMA 7 and Viva Entertainment, “The Wall PH” is the local version of an American pachinko-inspired game show of the same title. The game’s objective is to collect as much as possible by correctly answering trivia questions and capturing high-value slots in the pegboard.

Like in any new show he does, there was an adjustment period. But by the end of his first taping day, he felt welcome and at home. “Everyone worked hard to make the show work. At first maninibago ka sa mga tao. But I felt at home and we were so happy,” Billy said.

While he has hosted numerous variety, reality and game shows in the past, it never really gets old. “It’s always a new experience. For one, you work with different people and meet new contestants,” pointed out Billy, who has gotten more confident with his hosting, thanks to people like Bobet Vidanes, Boy Abunda and Luis Manzano.

“They all shared with me their knowledge about hosting. And I try to put everything into one,” Billy said. “In every show, I try to gauge which style suits a particular situation. Should I be energetic, kengkoy or serious? I always study for my job.”

The show is Billy’s first project with the Kapuso network since transferring to ABS-CBN in 2008. And with other shows on TV5, like “Masked Singer Pilipinas” and “Tropang LOL,” he jokingly referred to himself as a “Pambansang Katrabaho.”

“This collaboration between GMA 7 and Viva (who manages his career) gave me an opportunity to work freelance, with anyone,” he said. “It’s such a blessing in these times. The setup works for me… It feels almost unfair, but it also feels like a blessing.”

Asked by the Inquirer if being a freelancer suits his needs better, Billy said that, “at the end of the day… [I go] where work takes me.” “Now this is where it has taken me. We have other plans (with GMA 7) down the line… we’re in talks now,” Billy said, adding that the possibility of being an exclusive Kapuso talent will be up to the network and his management.

But for now, making the rounds of networks and companies works for him. “You get to help, mentor and inspire more people and vice versa. The more the merrier. Naikutan ko na lahat,” Billy said. “At the end of the day, isa lang ang industriya natin.”

Uncertainty hung over Billy’s head when he decided to work for other networks and entertainment companies in 2020, following the nonrenewal of ABS-CBN’s franchise. And while there were fans who questioned his loyalty, Billy stressed that he didn’t have an existing contract with any network during that time.

“I was worried because it was something new… There was this feeling of uncertainty. We don’t know where life will take us. But of course, decisions have to be made,” he said.

And then he left it up to God. “I feel like it was orchestrated by God more than anything. I can’t really explain or understand why I made the decisions I made, but they’re working. Who am I to question that? The blessings are there and I’m thankful,” Billy said.