‘Four Kings and a Queen’ US series a success despite unexpected setbacks; PH shows next | Inquirer Entertainment

‘Four Kings and a Queen’ US series a success despite unexpected setbacks; PH shows next 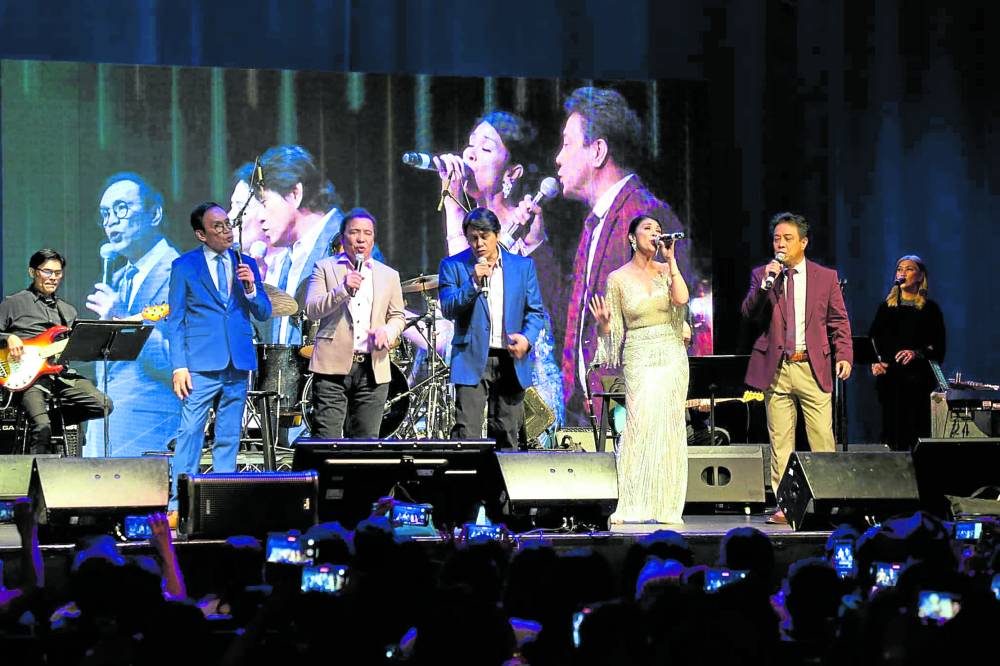 The “Four Kings and a Queen” concert series ran into a few hiccups on its recent tour in the United States. Aside from inevitable and niggling hitches like scheduling conflict and delayed luggage, two of the five headliners, Hajji Alejandro and Nonoy Zuñiga, tested positive for COVID-19.

Because the production team and the other artists, Marco Sison, Rey Valera and Pops Fernandez, were required to quarantine, the July 1 Las Vegas date had to be rescheduled to a later date. They were worried at first: “Will the people still come?” they wondered.

But luckily, the unexpected setbacks didn’t dampen the Filipino community’s excitement for live music one bit.

“We didn’t know what was going to happen. We weren’t sure if the show was going to push through… Were surprised because the fans in Las Vegas were still there [for the new date]—100 percent,” Hajji said at a recent press conference for the Manila staging of “Four Kings and a Queen” on Aug. 26 and Aug. 27 at the Newport Performing Arts Theater in Newport World Resorts.

“Some people had a fever. And there was exposure, so we had to quarantine. But the audience remained supportive. In fact, we even added more dates after,” Marco said, adding that it feels great to be back doing a live concert, especially in front of overseas Filipinos who have been raring to get their fix of OPM.

Catching up with fans

“You really feel the support of the Filipinos there for Filipino artists and music. You can’t go wrong with your kababayans—they will be there. You will feel their love,” he added.

The show will have five music icons performing their most popular hits. But more than the music, the concert, Hajji said, will also be a fun catch-up meeting with fans. “After more than two years of not performing live, this is all very exciting for us four. It’s like a grand reunion of sorts. We catch up with what each other has been doing,” he said. “We’re happy that our group has a market— a proven one, at that. It doesn’t matter what day or which venue you choose, they will come.”

‘Good to be alive’

Rey, who had to undergo surgery for abdominal adhesion before the pandemic, once found himself pondering the fragility of life. But hearing fans’ cheers and applause reminded him why “it feels good to be alive.”

“I got hospitalized prior to the pandemic. And then, in the past two years, you saw people dying. So you wonder, ‘Am I next?’ But after going to America and seeing our fellowmen’s reaction made me think, ‘It’s good to be alive.’ So let’s all celebrate the fact that we managed to survive what it is we have to go through,” he said.

“Let’s all enjoy ourselves. Life is a fickle thing. Tomorrow or the next day, you or your friends could be gone… We don’t know what the future holds, so we just all should love each other,” Rey added.

Pops, who will produce the group’s upcoming Manila dates, admitted that mounting concerts is still a risk nowadays because a lot of people are still wary of attending big gatherings. But it’s a risk she’s willing to take—if only to see the smiles and happy tears of their fans.

“If we artists are excited to perform, the people are even more excited to hear familiar songs. I have friends who have seen the show and I saw them crying afterward. They said it was their first time to watch a live concert after a long while, and they couldn’t help but get emotional listening to the songs,” she related.

“Sometimes we forget that music can have that kind of effect on people. For two hours, they get to enjoy themselves and forget all their problems,” Pops added. “Music is powerful. It can bring us back to certain moments, happy or sad. It can give us joy or pain. It can remind us of many beautiful memories.”