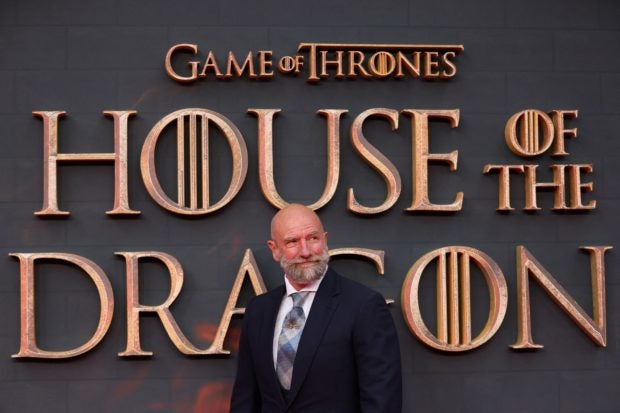 In this file photo taken on Aug. 15, 2022, British actor Graham McTavish poses on the red carpet upon arrival to attend the HBO original drama series “House of the Dragon” premiere at Leicester Square Gardens, in London. Image: AFP/Hollie Adams

As “House of the Dragon” debuted to nearly 10 million United States viewers this weekend, HBO appears to have claimed first blood in its much-hyped TV fantasy epic showdown with Amazon’s upcoming “Lord of the Rings” prequel.

Set in the same Medieval-inspired Westeros world as smash hit “Game of Thrones,” “House of the Dragon,” which launched Sunday, is a crucially important series for the premium cable network and its streaming platform HBO Max.

HBO is banking on its prequel matching the wild popularity of the original “Thrones,” which over eight seasons became appointment viewing, spawned countless imitations and delivered 59 Emmys — a record for a drama at television’s equivalent of the Oscars.

A press release on Monday hailed 9.986 million viewers as “the largest audience for any new original series in the history of HBO” — although some analysts noted that “new original” might be pushing a definition for a spin-off, and that its parent title drew a whopping 17.4 million to the debut of its final season.

Still, the figure represents a success for newly merged Warner Bros. Discovery, which is under intense scrutiny as it tries to navigate its place in a rapidly changing entertainment landscape dominated by the so-called “streaming wars.”

On Sept. 2, fierce competition will arrive in the form of “The Rings of Power,” another swords-and-dragons-themed epic of the small screen, this time taking place in J.R.R. Tolkien’s Middle Earth, and created by retail giant Amazon’s own streaming platform Prime Video.

Said to be a passion project for Amazon’s uber-wealthy founder Jeff Bezos, “The Rings of Power” has been commissioned for five seasons, and has been dubbed the most expensive show ever made.

Its overall budget of around $1 billion dwarfs the $150 million spent so far on “House of the Dragon,” though HBO has several other glossy Westeros-set prequels, sequels and spin-offs in the works.

Creatives and executives on each side have been careful to play down talk of a rivalry. And in reality, comparisons between the shows may be harder to draw than in TV ratings battles of the past.

While HBO has been happy to celebrate its strong early ratings figures, Amazon is under no obligation to publish viewing statistics.

Indeed, many in the more “traditional” side of Hollywood have noted that Prime Video — which produces both television and film — may not be especially interested in the same metrics as its apparent rivals.

Earlier this year, the head of the movie theater industry’s trade body told Agence France-Presse his group was “very concerned” about Amazon Prime, noting that the subscription service’s business model was not “trying to make money” off its movies and shows, but instead getting consumers to “buy their groceries and use their shipping services.”

Still, fantasy fans including George R.R. Martin — author of the books on which both “Game of Thrones” and “House of the Dragon” are based on — have expressed hope that both can be a success.

“I want both shows to find an appreciative audience, and give them great television. Great fantasy,” Martin wrote in a recent blog post. “The more fantasy hits we have, the more great fantasy we are likely to get.” AP/JB

TAGS: Game of Thrones, George R.R. Martin, HBO, House of the Dragon, Lord of the Rings