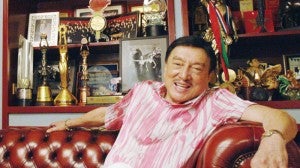 Stars are crossing network and political party lines to pay tribute to and pray for comedy king Dolphy, who is in critical condition and under intensive care at Makati Medical Center (MMC).

He said his dad was now stable. “It was as if a miracle had occurred overnight because of the prayers from our countrymen,” he said.

He earlier told the Philippine Daily Inquirer that his father was suffering from chronic obstructive pulmonary disease.

At midday Thursday, doctors told the Quizon family that the ailing comedian’s condition had improved enough for him to undergo a dialysis.

Two weeks ago, the comedian was rushed to the hospital after his latest bout with pneumonia, “his 10th time to fall ill since July last year,” said his son, Eric, who is the family’s spokesperson.

Colleagues and coworkers from the country’s top three networks are rallying behind Mang Pidol, as he is known in the biz.

On Thursday, they appealed for prayers and the swift declaration of the beloved comedian as national artist.

Felipe L. Gozon, chairman and chief executive officer of GMA 7, told the Inquirer: “He is not just a national artist. He is an icon. We are praying that he gets well soon.”

Charo Santos-Concio, ABS-CBN president and chief operating officer, told the Inquirer: “He epitomizes humility, sincerity and kindness. Whenever I talk to young stars, I always use him as an example. He is so well grounded.”

Dolphy deserves to be a national artist, Concio said, because “he has defined Filipino humor for generations. He has provided light to our dark existence.”

Actress and Batangas Governor Vilma Santos, who will soon release a film under Star Cinema, ABS-CBN’s film arm, agreed. “He is an institution in the entertainment industry,” she said. “I am continuously praying for him and his family.”

Dolphy’s fellow TV5 talent, actress Nora Aunor, said in Filipino: “Let us continue praying for him. He has given us so much joy and laughter all these years. Now it’s our turn to give to him … through our prayers.”

Singer Ogie Alcasid, a GMA 7 talent and president of the Organisasyon ng Pilipinong Mangaawit, said: “He is and will always be the comedic actor that we will emulate because of his wit, charm, comic timing and huge heart. We love him dearly.”

Cavite Representative Lani Mercado said she had been praying for Dolphy since Sunday, Father’s Day.

“My husband (Senator Bong Revilla) and I are truly appreciative of his kindness,” she said. “He is a great father to his children and great lolo to his grandchildren. May God guide him and strengthen him in this time of struggle.”

“He is admired, respected and loved not just by show biz people, but by many Filipinos,” he said in Filipino. “I am praying fervently that Tito Dolphy will overcome his illness.”

Actress Carmi Martin, who was cast as one of “Dolphy’s Angels” in the 1980 movie with that title, said, “I always pray for Dolphy’s salvation and his partner Zsa Zsa’s strength.”

“We want to personally pray for him,” she said. “I want to thank him for all the breaks he had given me. He was the one who discovered me.”

Dolphy’s fellow comedians have turned serious, too—in praise of a pioneering comic genius who has been entertaining Filipinos for 68 years.

Comedian Roderick Paulate is despondent. “It’s hard,” he said. “I am praying for him.”

Comic Smokey Manaloto, who worked with Dolphy on the ABS-CBN sitcom “Home Along da Riles,” was just as emotional. “No words can capture Tatay’s importance in my life,” he said in Filipino.

“He’s my guide and second father.  I consider myself lucky that I was given the chance to work with and learn from him for 13 years. Although we are not related by blood, he loved me like a son. No one can replace him as King of Comedy, now and forever.”

“I am very happy to see him and I am hoping that his condition continues to get better,” Manaloto told INQUIRER.net during his visit at the MMC Thursday night.

Stand-up comic Jon Santos said: “Our King needs our prayers. With his heart and soul, he has given us the healing power of laughter all these years. It is our turn to rally behind him and his family.”

Another stand-up comic, Willie Nepomuceno, who impersonates Dolphy in his performances, remarked, half in earnest, half in jest, echoing the infamous farewell speech of impeached Chief Justice Renato Corona: “Mang Pidol cannot wish to be excused just yet. A TRO (temporary restraining order) has been filed and you are not allowed to leave this earth until a successor to your throne has been found. There’s no one yet to inherit your crown. Long live and prosper, my friend.”

According to reports, political figures have also called for the proclamation of Dolphy as national artist, including Vice President Jejomar Binay and Senator Manuel Villar. Former Makati Representative Teodoro Locsin, Manila Mayor Alfredo Lim and Senator Pia Cayetano joined their voices to the clamor for the conferment of the national artist award on Dolphy.

National Artist Bienvenido Lumbera also endorsed the conferment of the title on Dolphy.

Read Next
Dolphy was able to talk, says hospital visitor
EDITORS' PICK
Smart powers Liga Adarna Season 4: Race to the Top
PH logs 20,755 new COVID-19 cases; no deaths reported again due to glitch
Don’t use military to threaten people, Robredo tells Duterte
Smart reaffirms 5G leadership as PH’s most reliable 5G mobile operator
Urban poor struggle to adapt as rising seas threaten to remap Metro Manila
Huawei’s relentless mission to bring ultimate health and wellness tracking for your fitness goals
MOST READ
Group rallies support for Robredo as she calls for a united opposition
Trillanes to give Robredo until last day of COC filing before finalizing presidential bid
Bong Go says he is not seeking presidency in 2022
It’s clear Marcos camp is afraid of Robredo after losing to her thrice — OVP spox
Don't miss out on the latest news and information.