Woody Allen on the idea of dying, why he enjoys LA now and being a ‘foreign’ filmmaker | Inquirer Entertainment

Woody Allen on the idea of dying, why he enjoys LA now and being a ‘foreign’ filmmaker 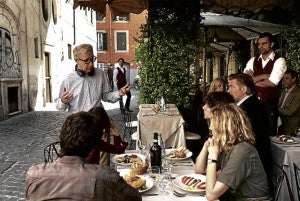 WOODY Allen directs his stellar cast in “To Rome with Love.” If he were younger, he says, he’d play Jesse Eisenberg’s role.

LOS ANGELES—“Welcome to La La Land,” we greeted Woody Allen, who was in town recently on a rare visit to LA. “I’ve got my weather, you know,” Woody quipped, referring to the unusual gray, cloudy atmosphere outside which he loves.

The filmmaker tried to overcome his fear of flying—“I’m always sitting braced for the crashing of the plane,” he said—to attend the Los Angeles Film Festival opening night screening of his new film, “To Rome with Love.”

For the first time since 2006’s “Scoop,” Woody again acts in his own romance-comedy, this one set in the Eternal City. He also wrote the four stories linked by the Italian capital setting that feature Penelope Cruz, Ellen Page, Alec Baldwin, Jesse Eisenberg, Robert Benigni, Judy Davis, Ornella Muti and Alison Pill.

In our press con, Woody, who shot his recent films in European cities like London, Barcelona, Paris and Rome, said he had always wanted to be a foreign filmmaker but that, since he was born in Brooklyn, that posed a bit of a problem. The native New Yorker also revealed why he loved to visit El Lay now… but for no more than two days each time.

Below are excerpts of our interview, punctuated with laughter, as usual, at the Beverly Wilshire Hotel:

Has your relationship to LA changed?

I have a lot of friends here and I enjoy coming out here for a couple of days. It’s not a city I could ever live in because I don’t like the fact that it’s all spread out. I don’t like to be dependent on an automobile. I don’t like sunshine a lot. I like cloudy days.

When I first came to Los Angeles in the late 1950s, you couldn’t get a good meal anyplace. There wasn’t a restaurant in this town that was decent. Now, it’s full of fabulous restaurants. It’s come a long way in terms of becoming a place that is fun to visit. It has museums and things that make a city fun to go to. I enjoy it. I see my friends. I see whatever exhibits are at the museum, eat at a couple of great restaurants, have some laughs and then I go home.

I would not like to live here because I would never be able to survive getting up in the morning and seeing that sunshine day after day and having to get into the car to go someplace. I 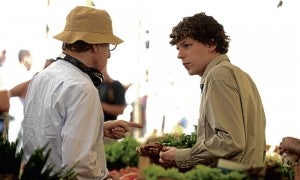 DIRECTING Eisenberg who, he agrees with observers, is the younger generation’s Woody Allen. AFP/getty images

need to get up in a city like New York, Paris or London and get out into the streets on foot, where everything’s all around me. If I want a bowl of wonton soup at 4 a.m., I can get it. I never do, incidentally, but I want to know that it’s there if I want it. That’s how I feel about Los Angeles. It has come a long way and it’s very enjoyable for a couple of days. I am just not temperamentally suited to the style of life here.

You play the role of a man who has a fear of flying, germs and death in the film. He’s a bit like yourself. How [intense] are your phobias these days and how do you feel about flying?

I do it reluctantly. I’m always sitting braced for the crashing of the plane. Flying is something that I am not thrilled with. There’s no way that I could avoid flying, for two reasons: I have to go to these places because otherwise I can’t work. I can’t do any promotion for a film. I can’t shoot a film. It’s not so easy. My wife, who doesn’t have any of these phobias, likes to go to these places. She likes to travel, go to Rome, Paris, Barcelona and Los Angeles. She has no fear of flying; nor do my children. So to accommodate them, I fly but my fists are always clenched. It’s very difficult for me.

Death—I’m still against it. I haven’t changed my political views on that. I see no advantage in death, no matter how hard I study the problem.

You act in this film for the first time since 2006. What does acting mean to you?

I’ve never thought of myself as an actor. I could never play Chekhov or a big range of characters. There are one or two things I can do. I can play a lowlife like in “Broadway Danny Rose.” I can play a more scholarly person because I look scholarly though I am not. If I’m writing a script and there’s a part in it that I think I can play—an intellectual, a teacher or a psychoanalyst—I can fob myself and get away with it. I could play a good bookmaker, a taxi cab driver or a cheap little Broadway agent like in “Broadway Danny Rose.” Otherwise, I’m lost.

Did you enjoy writing the English subtitles in this movie (portions are in Italian)?

Jesse Eisenberg reminds us of a young Woody Allen. Do you see him that way, too?

I do to a certain degree, yes. I would have played Jesse’s part in this film if I were younger. He’s the dominant actor of [his] generation, a great actor. He plays the part very amusingly and perfectly. Probably better than I ever could have played.

Do you sing in the shower?

Do you sing opera in the shower?

No, I don’t sing opera. I sing pop tunes.

You’re going to shoot a new movie in San Francisco. What is it about? 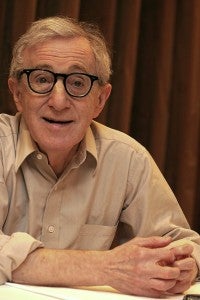 “FLYING is something that I am not thrilled with. I’m always braced for the crashing of the plane.” photo by RUBEN Nepales

I can’t tell you what it’s about… but it’s a human drama and we’re still casting it. I have Alec Baldwin, Cate Blanchett, Sally Hawkins, Peter Sarsgaard and a couple of American comedians, Louis C.K. and Andrew Dice Clay. It’s a serious piece about two sisters, played by Sally and Cate. I can’t give away any more… but the sisters are the central focal points and Alec is the main male in it.

What are your thoughts on the coming presidential election?

I think Obama will win. I think he deserves to win. This is not a knock against Romney but Obama deserves to win on the merits of his achievements, which they’ve been miserably inept about explaining to the public. The public just doesn’t appreciate that the guy has achieved some very good things. I do think he’s got a long way to go but I feel that he will win because the public understands that he’s smart and that he has done some things, although they don’t realize the full extent of it. They see a fundamental decency in him.

If you can change one thing in American politics, what would it be?

I would change the whole Republican Party.