Who among the Bb. Pilipinas queens is ‘lovely, pretty, captivating, so exciting?’ Winners assess themselves | Inquirer Entertainment

Who among the Bb. Pilipinas queens is ‘lovely, pretty, captivating, so exciting?’ Winners assess themselves 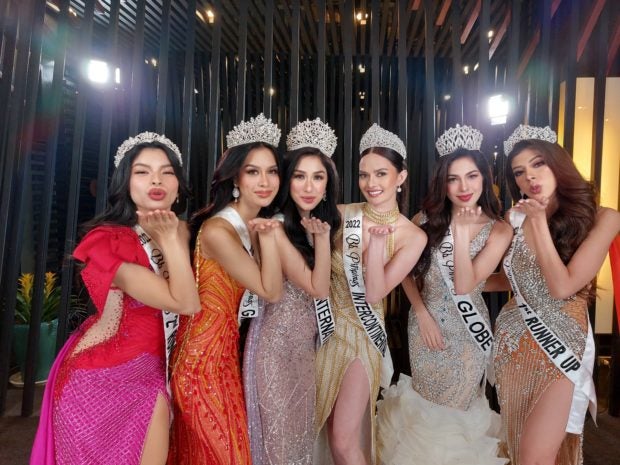 MANILA, Philippines—The iconic Binibining Pilipinas theme song “Win Your Heart” has the memorable line “lovely, pretty, captivating, so exciting” to describe the pageant’s winners. But who did this year’s titleholders think fit these adjectives among them?

Fernandez is the runaway winner for being “lovely,” mostly because it also happens to be her nickname. However, Borromeo only knew of this bit of information after she had assigned the word to the Taclobanon beauty.

“Whenever I see her, her beauty is just lovely,” Borromeo said.

For Fernandez herself, she did feel lovely during the final competition at the Smart Araneta Coliseum at the Araneta City in Quezon City on July 31. “I know for myself that I performed so well, and that the judges really saw the loveliness in me,” she said.

Borromeo and Tamondong tied for “pretty,” getting two votes each.

“I know she (Tamondong) looks quite mature for her age, but she’s really the baby in our Aces [and Queens beauty camp] family. She’s very young, and you can see it in her eyes,” Borromeo said.

For Basiano, Tamondong has the “wow factor,” with a “pretty personality.”

The ladies are split when it comes to who among them fits the word “captivating.”

Borromeo believes Basiano’s performance made her captivating. “You’ll see that she really came from a place of growth. And her beauty, as well, it’s captivating,” she said.

Basiano returned the favor, and said Borromeo’s beauty is captivating and mesmerizing.

Tamondong found herself captivating because “I’m forever grateful with a captivating heart,” she said.

For Fernandez, what makes Tamondong captivating is how beautiful she is at just 19 years old.

Basiano got three nods for “exciting,” among the queens, including herself, primarily because of her “pasabog” gown performances that gave her the “Best in Long Gown” award two years in a row.

Aside from herself, Fernandez and Tamondong also found Basiano “so exciting.”

For Borromeo, her energy makes her exciting. “I’m not the smartest, not the prettiest, but I am someone filled with wonder. And I’m excited for what I can learn about the world, about the people I meet,” she said.

The four ladies bagged their titles in a field of 40 aspirants in this year’s Bb. Pilipinas pageant. They now carry the duty of representing the Philippines in various global competitions this year and the next.

Both Basiano and Fernandez are eyeing back-to-back wins for the Philippines in their respective international competitions. Their Bb. Pilipinas predecessors Cinderella Faye Obeñita and Maureen Montagne are the reigning Miss Intercontinental and Miss Globe, respectively.

Tamondong will attempt to give the Philippines its first victory in the Miss Grand International pageant.

All three of them will see action overseas in a couple of months. The Miss Intercontinental pageant will be staged in Egypt on Oct. 14, the Miss Globe competition in Albania on Oct. 15 and the Miss Grand International contest in Indonesia on Oct. 25.