Actor-director Eric Quizon, son of Rodolfo “Dolphy” Quizon, says his father opened his eyes for the first time since Saturday, June 16, 2012, when he was rushed to Makati Medical Center where he is being treated for chronic obstructive pulmonary disease (COPD). He says he and his siblings are seeing a glimmer of hope after their father opened his eyes. Video by INQUIRER.net’s Ryan Leagogo

MANILA, Philippines—For the first time in the last four days since he was confined at the intensive care unit of the Makati Medical Center, actor-comedian Rodolfo “Dolphy” Quizon, opened his eyes and looked around him, bringing a “glimmer of hope” to his family and millions of Filipino admirers worldwide. 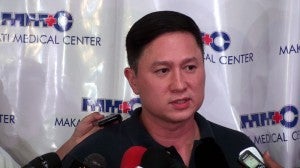 “We were in tears out of joy. We saw a glimmer of hope. This is due to the dialysis he is currently undergoing,” said son Eric Quizon, who is the official spokesperson of the family, in a press conference at around 6 p.m. Thursday.

Dolphy’s vital signs, he said, improved on Wednesday night till Thursday morning, which prompted the doctors to give the go signal for the dialysis.

He said the dialysis started at 2:40 p.m. Thursday.  “This will help my father by removing the excess bodily fluids in his kidneys.  He also had a blood transfusion,” Eric said.

Eric said there is a hemorrhage in Dolphy’s body though the doctors can’t determine where.

The dialysis will continue as long as Dolphy’s body can handle, Eric added.

“We believe there’s a miracle going on because of the prayers of his fans. So please continue to pray for my dad’s recovery.”