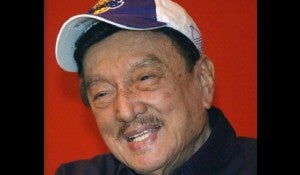 MANILA, Philippines—Actor-musician Ronnie Quizon, son of comedian Dolphy, said on Wednesday the family has prepared for the eventuality of the comedy king’s death.

“It’s easier for us to accept this because we don’t want to see him suffering. He once told me that he didn’t want to suffer—gusto n’ya mabilis lang (he wants it to be quick),” Quizon told the Philippine Daily Inquirer Entertainment. “I prefer him to go the way he wants to go, be it with a blaze of glory or in a whimper. I’m a dutiful son. I will try to grant his wishes, regardless of what I really want to happen.”

Quizon added that when Dolphy found out about his chronic obstructive pulmonary disease (OCPD) in 2009, the comedian began talking to his kids one by one. “We’ve had our moments, especially when I go to his house to visit,” Quizon shared. “Dad once said he would give something to me, but I told him, ‘let’s not talk about that right now, Dad.’ I would try to resist this because it felt like he was already bequeathing things to me.”

The actor-musician added: “Our relationship isn’t like what he has with my other brothers (actors) Erik or Epy or Vandolph na may lambing at kulit. I’m not like that. We talk man to man. I open up to him and he listens and gives advice.”

Quizon also said the family was overwhelmed with prayers being said for the recovery of the comedian. “It gives me goosebumps just reading about it on social networking sites. I think it’s what’s actually keeping him alive. Even my classmates back in Grade 1 sent me messages. It’s really nice to know that my dad is well-loved. We’re really feeling the support right now.”

Quizon said: “Everything is possible with God. Whatever happens to our father, we’re prepared, although it’s only now that we’re getting organized. Our priority is to keep him alive. Walang magandang gamot at magaling na doktor kapag kinuha ka na (No medicine or doctor will be as effective when your life is being taken). Everything is within the Lord’s hand.”

Quizon also said actress Maricel Soriano and his two sisters were taking care of Dolphy when he left the hospital. “Zsa-Zsa (Padilla, Dolphy’s long-time partner), was there, too. I tried to see him, but hospital rules prohibit more than one person at a time inside the ICU.”