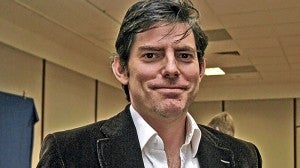 LOS ANGELES – “I really want to see how they’re going to figure out the part where the vampire baby chews its way out of Kristen Stewart’s stomach,” said “New Moon” director, Chris Weitz, when we recently asked him what he’s looking forward to seeing in the final “Twilight Saga” movies.

Chris quipped with a smile, “I certainly wouldn’t know how to shoot that. I’m sure Bill Condon is going to figure it out, because he’s a terrific director.”

As for the future of Kristen Stewart, Robert Pattinson and Taylor Lautner after “The Twilight Saga: Breaking Dawn” Parts 1 (to be released in November this year) and 2 (next year), here’s Chris’ wish for them: “For the three leads, they’re going to need to handle this last tsunami of publicity and distinguish themselves in other films.”

“With Kristen, she has always done terrific independent-film roles, and that’s great,” said Chris, who also directed the memorable “About a Boy,” “The Golden Compass” and, now, the acclaimed “A Better Life.” “Rob is doing that sort of thing, too,” Chris pointed out. “Rob is filming with David Cronenberg (‘Cosmopolis’) now. Taylor is carving a different path in action films.”

“I want to see them succeed,” Chris stressed. “I want to see them retain their essential humanity. I like them very much. What I also wish for them are happy lives that aren’t impinged on too much by the downside of the great things that have happened to them.”

Asked about his diverse project choices, from the big-budgeted “Golden Compass” to “A Better Life,” an indie film about an undocumented LA gardener that is earning glowing reviews, Chris explained, “My first concern is never to do the same thing twice – in part, because I get bored easily, and also because I don’t want to get pigeonholed as a comedy or drama director.

“I did ‘Golden Compass’ because I love Philip Pullman’s books. It wasn’t because it was a big movie. It happened to be a gigantic movie, and I learned a great deal about the logistics of making that kind of film.

“So, I was able to apply that to ‘New Moon,’ which was great. But, the last thing I wanted to do was to make another ‘Twilight’ film, because that would just be me repeating myself.”

He added, “‘A Better Life’ was such a good script that I couldn’t resist doing it. I do whatever strikes me as the next good thing to do. I rarely, if ever, have my next project in mind. It just happens.” Working on a story by Roger L. Simon and a screenplay by Eric Eason, Chris draws good performances, especially from Mexican star, Demian Bichir, as a single father, an illegal alien trying to make “a better life” for him and his son (newcomer Jose Julian), a teenager facing the pressures of gang life.

“Demian was a very easy choice,” Chris said about casting the actor whose credits include the TV series, “Weeds,” where he played Esteban Reyes. “I watched his Mexican films and saw how capable and masterful an actor he was. I also saw him in Steven Soderbergh’s ‘Che’ and thought he was marvelous as Fidel Castro. So, when I was auditioning for ‘New Moon,’ I brought him in to read for a part which I didn’t think he was right for, but I just wanted to work with him a bit.”

Grinning, he recounted, “So, Demian came in, not sure if he was reading for the part of a gardener or a king of the vampires. He asked, ‘Am I a vampire gardener? What do I play in this scene?’ I explained to him, ‘I don’t think you’re right for this part, but I’m going to be making this other film (‘A Better…’). I think you’re the right guy for that one.’

“I call him my horse,” Chris added. “He is the heart of this movie. His performance is staggering, which was just what I expected. He was also a tremendous help to Jose Julian, who’s doing his first movie ever. Jose grew up in East Los Angeles and took three buses to get to our audition.

“It took him three hours to get to our audition, and three to get home. He’s from a single-parent immigrant family, so he knows what he’s talking about, but that doesn’t guarantee that he’s going to be great in front of a camera.

“You have to throw them in front of a camera and put them under a certain degree of gentle stress to understand whether they’re going to be able to react. Jose is the most natural kid actor I’ve ever encountered!”

In a separate interview, Demian recalled his amusing first encounter with Chris. He narrated, “I got this call from Chris that he wanted me to read for ‘New Moon,’ so I went to the audition. As I was putting money on the parking meter, I heard a voice say, ‘Hola, Señor Bichir.’ I turned to look for my paisanos, because they do always talk to you. I kept looking, but I didn’t see anyone. All I saw was this tall American guy. He said, ‘Soy Chris. Como estas?’ I thought, ‘What the hell is happening here?’ That’s how I met Chris.”

Laughing, Demian recounted, “Then, we went in, and when they were getting ready for my reading, Chris started talking about this project involving a gardener in the story. I was confused. I thought, ‘Wow, this gardener is like a vampire? Does he work at night or does he sleep upside down in a palm tree?’”