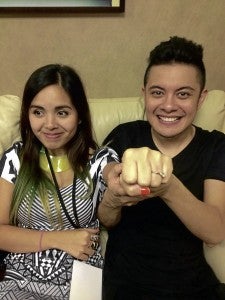 Paolo Valenciano proposed to his long-time girlfriend, Sam Godinez, during the show of his dad, Gary V, in the United States— which elicited shrieks of delight and thunderous applause from the crowd. Let their photo on this page say the rest.

Meanwhile, I asked his mom, Angeli some questions:

How did you and Gary feel about Pao proposing?

Gary was half-happy, half-sad. Single, Pao is an adult but isn’t. Married, he will turn really adult.

We felt it was about time! Pao is shy and rarely calls attention to himself, so we figured this was important to him! We all cried while he proposed.

That proposal during Gary’s show was something the family planned, or was it just Pao’s idea?

He told us Sunday before the Friday show!

When and where will the wedding be?

What’s your advice to Pao and Sam?

Immerse themselves in the Word of God. Only faith in God and his Word will keep them together.

Are you and Gary ready to be grandparents?

What’s the hardest part about letting go of a son as he starts a new life with his wife?

Nothing hard there, really. We are gaining a daughter in the process … feels so hand in glove. 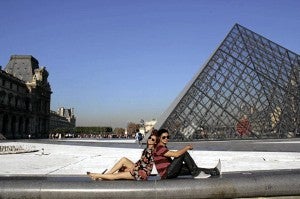 I just received an invitation to the wedding of Precious Lara Quigaman and Marco Alcaraz on July 8, 4 p.m. at Hacienda Isabella in Cavite.

Some of the celebs in the entourage are Gerald Anderson, Paolo Paraiso and Jason Abalos as groomsmen; Jeremy  Marquez as  veil sponsor; Alfred Vargas as candle sponsor; and Luis  Alandy as best man.

Congrats to the fab couple! May you love happily ever after!

From being Kapamilya to Kapuso talents, what made Cesar Montano and Marvin Agustin decide to move over to the Kapatid network?

“Hosting TV5’s ‘Artista Academy’ is in line with my passion, which is acting,” Buboy explains. “I think I can be of help to a new generation of actors. Plus, the show is giving the winner a very generous prize of P20 million, a first on local TV. I’m proud to be part of the project.”

Marvs has to say: “I feel that AA is the perfect reality show for me. I can very well relate to future TV5 artistas, having gone through the same experience when I was starting in the biz 16 years ago.

ABS-CBN launched my career, GMA allowed me to explore my other talents, and now TV5 is expanding my horizons. I remain grateful to channels 2 and 7. I have come to realize that it’s no longer about me or the station. It should be about the viewers, whom we aim to please.”

No matter what channel Buboy and Marvs are in, they channel their creative juices into projects worth watching. They could very well be called the KKK (Kapamilya, Kapuso, Kapatid) masters! 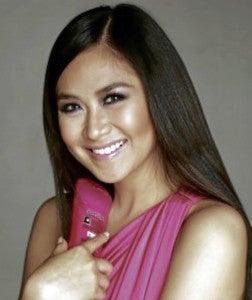 KEAN says Sarah is too much of a “baby” for the relationship that he wants.

Sarah Geronimo and Kean Cipriano have a certain chemistry onscreen. When Kean was a guest on “Sarah G Live,” it seemed like he was flirting with her. Does he plan to pursue Sarah even if she’s being linked to Gerald Anderson?

It is filled with drama, mystery and suspense as the families and friendships of these women are broken by secrets and lies.

4 soldiers slain in clash with Abu Sayyaf in Sulu