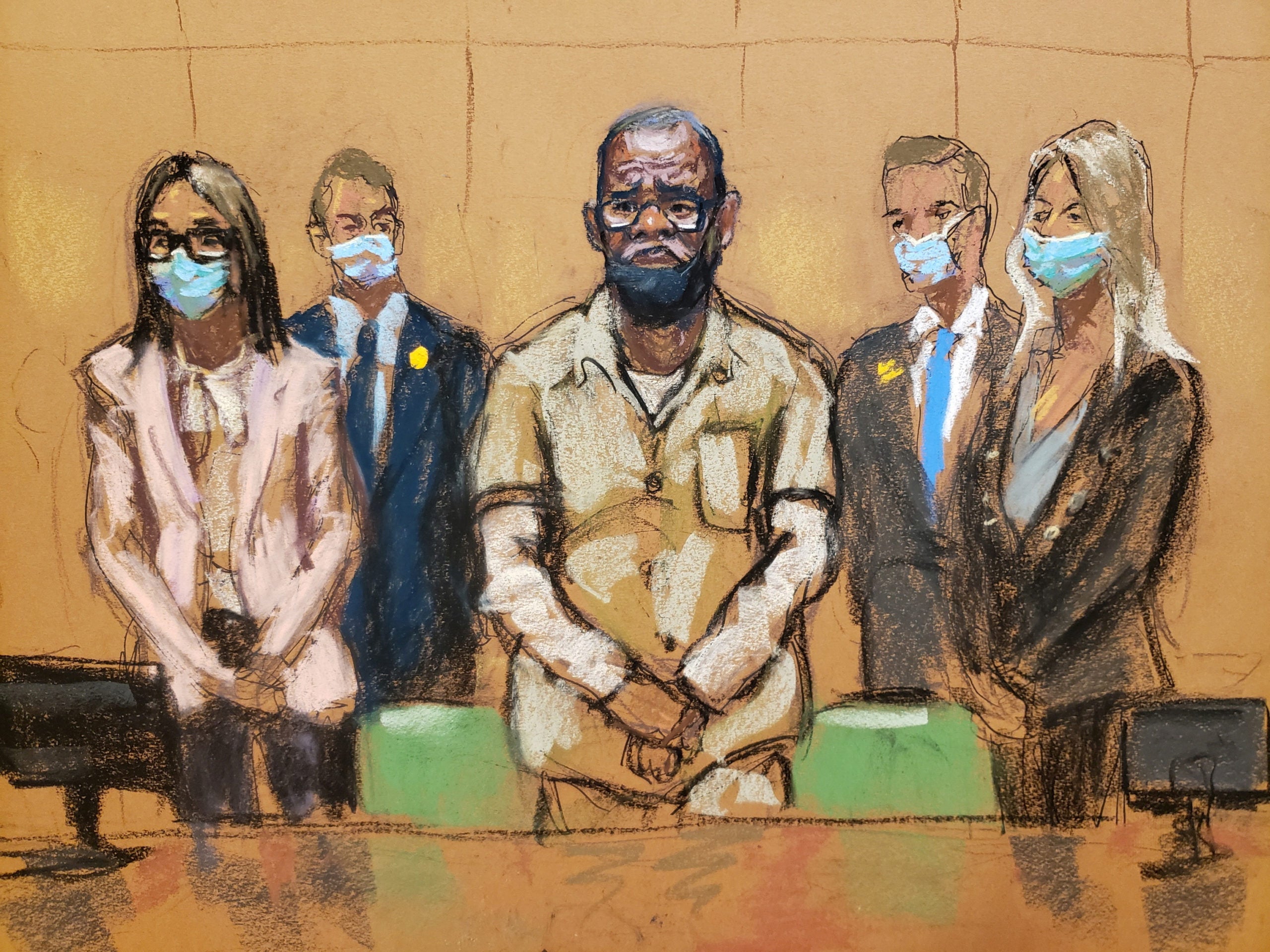 R. Kelly stands with his lawyers Jennifer Bonjean and Ashley Cohen during his sentencing hearing for federal sex trafficking at the Brooklyn Federal Courthouse in Brooklyn, New York, U.S., June 29, 2022 in this courtroom sketch. (REUTERS)

NEW YORK  – R. Kelly was sentenced on Wednesday to 30 years in prison, following the multiplatinum R&B singer’s conviction for exploiting his stardom and wealth over decades to lure women and underage girls into his orbit for sex.

The sentence was imposed nine months after Kelly, 55, was convicted of racketeering and sex crimes, in a trial that amplified accusations that had dogged the singer of the Grammy-winning hit “I Believe I Can Fly” for two decades.

“This case is not about sex. It’s about violence and cruelty and control,” Donnelly told Kelly. “You left in your wake a trail of broken lives.”

Kelly, whose full name is Robert Sylvester Kelly, is among the most prominent people convicted of sexual misbehavior during the #MeToo movement against such conduct by prominent men.

He did not speak during Wednesday’s hearing, but has repeatedly denied sexual abuse accusations.

After the sentence was read, his lawyer, Jennifer Bonjean, told reporters Kelly was “devastated” by the sentence but that he would appeal.

“Thirty years in prison is like a life sentence for him,” Bonjean said.

‘DO YOU REMEMBER THAT?’

The sentencing came after several accusers, some of whom were tearful, told the judge about how Kelly promised to mentor them and help them attain stardom, only to subject them to degrading sexual treatment and physical harm.

Many said the abuse led to mental health problems that persist.

“As a teenager, I didn’t know how to say no to R. Kelly when he asked me to perform oral sex on him,” said a woman identified as Jane Doe No. 2.

She then paused, looked at Kelly, and asked, “Do you remember that?”

Kelly wore a black face mask and beige prison clothing to his sentencing.

Several accusers testified during the 5-1/2 week trial about how Kelly would demand that his victims strictly obey his rules.

These included needing his permission go to the bathroom, calling him “Daddy,” and writing “apology letters” that purported to absolve Kelly of wrongdoing, among others.

The alleged victims included the singer Aaliyah, who prosecutors said Kelly fraudulently married when she was 15 to conceal earlier abuse. Aaliyah died in 2001.

“This is a significant outcome for all victims of R. Kelly and especially for the survivors who so bravely testified about the horrific and sadistic abuse they endured,” Breon Peace, the top federal prosecutor in Brooklyn, told reporters after the hearing.

He was convicted on nine criminal charges, including one count of racketeering and eight counts of violating the Mann Act, which bars transporting people across state lines for prostitution.

Prosecutors had urged a prison sentence of more than 25 years, saying Kelly had demonstrated a “callous disregard” for his victims and shown no remorse.

“I never thought that I would be here to see him be held accountable for the atrocious things that he did to children,” Lizzette Martinez, one of the accusers who spoke in court, told reporters after the hearing.

Defense lawyers said Kelly deserved no more than 10 years, the mandatory minimum, arguing that his history as an abused child may have led to his adult “hypersexuality,” and that he no longer posed a threat.

He will likely be transported soon to a jail in Chicago, where he faces an August trial in federal court on child pornography and obstruction charges. He also faces various state charges in Illinois and Minnesota.