If she wins, we all win,” explained Gerald Anderson as to why he is all-out in his support for celebrity vlogger Ivana Alawi’s first acting project as lead in the romantic-drama series “A Family Affair.”

“Sam (Milby, his costar in the series) and I would really guide Ivana. The whole story revolves around her character, and us four brothers are all connected to her,” said Gerald, referring to the Estrella brothers Paco (his character), David (Sam’s), Sebastian (Jake Ejercito) and Andrew (Jameson Blake).

Ivana plays the enchanting and innocent Cherryred, who becomes the object of affection of the four brothers.

“Since this is her first, you will really see the growth and improvement in Ivana. She has been given this unique opportunity and so she is really giving her best. I have a soft spot for artists like her. She makes me recall the time when I was just starting in this business,” Gerald told reporters in a virtual media gathering that was also attended by directors Jerome Pobocan and Raymund Ocampo.

“I remember telling my manager before we started taping for the show that I will do my best for her to shine. The supporters of Ivana, a YouTube star, will be surprised by her performance here. She showed passion and professionalism,” he pointed out.

Gerald said he made sure to guide Ivana most especially when taping for their love scenes. “As an actor, I’ve already done several love scenes in the past, so it’s always a challenge to make one different from the others. I have to be conscious of how I look at her, of which body part of hers to touch first—is it her hair, cheeks, or shoulders? It’s also a challenge to make my love-scene partner feel comfortable even though she is ‘exposed.’

“Direk Jerome even played mood music, but not before asking what kind of songs Ivana wanted to hear. As her partner, my actions have to look very passionate yet professional. I’m glad that even though Ivana is having a hard time adjusting to work, I see that she loves what she is doing.”

Gerald added: “It’s important to me that my coworkers feel comfortable on the set because what we’re doing is difficult and stressful. At the end of the day, I want them feeling relaxed so that when we resume work the morning after we will all be able to give our best.”

As to what makes his work in “A Family Affair” different from those he did in the past, Gerald pointed to his character, Paco, as the game changer. “The premise of the shows I’ve done in the past had always been boy-meets-girl and then they fall in love. With this one, I feel challenged because Paco is the first to fall in love with Cherryred and is willing to chase after her. He will make his life revolve around her.”

He added: “I took this as a challenge. I hope the audience will be able to see how Paco really struggled in order for Cherryred to fall in love with him, too. This thought was actually what made me feel excited to go to taping every day.” 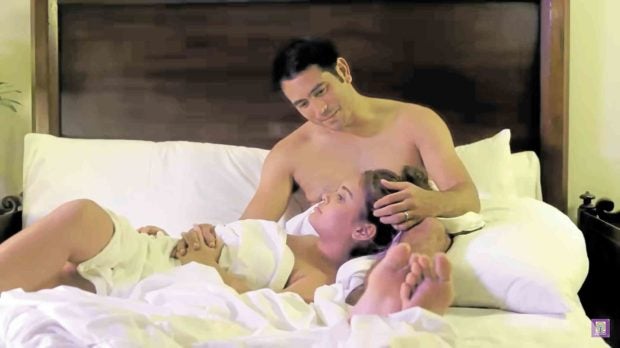 Gerald said he began preparing by studying and becoming his character long before he stepped on the set. “It’s tough because we were given very little time to do this. I make sure that when I arrive at work, I’m already Paco. I really took the efort to get to know him—his heart and soul. This makes my job easier, especially since we’re in a pandemic and could only work for 12 hours. That means we have to do 20 to 25 sequences in a day,” he explained.

Gerald said it helped a lot in terms of characterization that he and Paco are similar in many ways. “We both love and care for our families so much. We’re also very competitive and ambitious. We both want to succeed in whatever tasks or projects we decide to take on. We also know our priorities and are both focused on what we consider important in our lives. We’re both fighters. There were a lot of instances in my career when I felt like giving up, but I still chose to fight. Paco and I are the same because we welcome challenges in our lives. These make us more excited and game for anything,” Gerald explained.

“I know that many from the audience will be able to relate. This is why Paco and the program are special to me. I actually told myself that for my next project, I hope to do a family drama. I was happy that this was given to me,” he said.

Gerald then talked about Paco and his three brothers, with whom he has gotten close to on- and off-cam. “You will notice how tight we really are with the way we speak with each other and hang out in our tambay area when we don’t have work. This closeness, we were able to bring in front of the camera, even when we have scenes where we have to argue and fight.”

“A Family Affair,” produced by Star Creatives, will premiere on June 27 on the Kapamilya Channel’s Primetime Bida evening block, as well as on A2Z, TV5, worldwide via The Filipino Channel. INQ