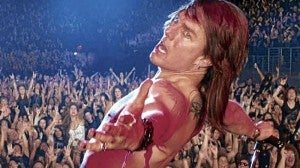 NEITHER hard work nor will power can turn Tom Cruise’s voice into the steely pipes of Freddie Mercury, Steven Tyler, Dennis DeYoung, Peter Cetera or Adam Lambert—that’s simply a scientific impossibility, because an exceptional voice is a special gift more than an instrument acquired through rigorous training.

But, “Rock of Ages” is a career-boosting testament to what hard work and will power can accomplish for a superstar in dire need of reinvention—and we’re glad to note that the risks Tom Cruise has taken have paid off beautifully (and musically). In fact, he is the best thing about Adam Shankman’s crowd-pleasing screen version of Chris D’Arienzo’s ’80s-inspired “jukebox” rock musical!

With Shankman (“Hairspray”) and choreographer Mia Michaels at the helm, the movie throbs with kitschy verve and winking fun as it follows a small-town girl and a city boy’s search for love and musical stardom in late ’80s LA.

It doesn’t help that the mayor’s rock-hating, Bible-quoting wife, Patricia Whitmore (the gloriously scene-stealing Catherine Zeta-Jones), is out to rid the Sunset Strip of “filth, sin, and rock ‘n roll—a disease with no cure!”

Dennis and his omnipresent assistant, Lonny (Russell Brand), see a bright light at the end of the tunnel, however, when reclusive rock god, Stacee Jaxx (Cruise), agrees to perform at the Bourbon before he embarks on a solo career. Problem is, the boozed-out superstar is as unstable as he is brilliant!

Worse, Jaxx even ends up nipping Sherrie and Drew’s romance in the bud, without his knowing it—a development that drives the former to take a job as an exotic dancer, and shoves the latter into the limelight, as the hip-hop- and rap-mouthing frontman of a boy band! 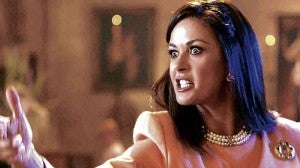 Unfortunately, the film, which “re-adjusts” some of the stage version’s plotlines to steer the movie closer to the GP market, is unable to sustain the momentum set by its show-stopping production numbers (featuring the music of Journey, Pat Benatar, Bon Jovi, Poison, Twisted Sister, Reo Speedwagon, Styx, etc.) and laugh-out-loud comedic flourishes (watch out for Baldwin and Brand’s zany “I Wanna Know What Love Is” segment), especially when trite “dramatic” moments follow its exhilarating musical numbers.

And, while the musical began its trek to the big screen as a 2005 stage production in LA, its film version has been preempted by Steve Antin’s vastly entertaining 2010 musical kitschfest, “Burlesque,” that paired Christina Aguilera with Cher. “Burlesque” follows an almost identical storyline, and its cast also includes Hough—as Aguilera’s nasty nemesis!

Just the same, “Rock of Ages” is a must-see, because it immortalizes the dazzling rock transformation of the supposedly humorless Tom Cruise, who seamlessly fudges the line between pathos and physical comedy even as he renders his songs with conviction, panache and head-banging flair. Eat your heart out, Daniel Day Lewis!

Read Next
Mary J. Blige misses Whitney Houston
EDITORS' PICK
High inflation: Your P1 is now worth only 87 centavos
Geek out at TOYCON 2022 powered by Smart Signature
Unemployment rate up to 6% in May
UK’s Boris Johnson will resign, BBC reports
High-risk pregnancy: Reducing your risk is in your hands
House energy committee chair Arroyo bats for cheap electricity
MOST READ
Suspect in grisly killing of missing woman in Bulacan arrested
Kim Atienza’s daughter flaunts bikini body in response to critics of her ‘revealing photos’
Cop slain in Isabela ambush
FDA probes popular Filipino noodle brand for ‘high level of ethylene oxide’
Don't miss out on the latest news and information.