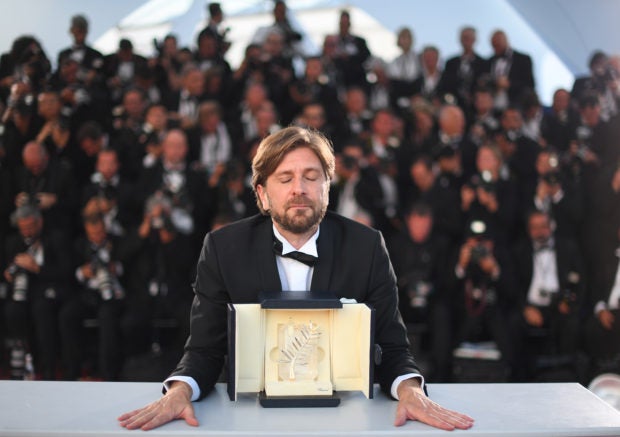 Swedish director Ruben Ostlund attends on May 28, 2017 a photo call after he won the Palme d’Or for ‘The Square’ at the 70th edition of the Cannes Film Festival in Cannes, southern France. Image: AFP/Anne-Christine Poujoulat

A new generation of Scandinavian filmmakers is making waves, following in the footsteps of Ingmar Bergman, Lars von Trier and the Dogme movement, with three directors in competition at Cannes this year.

Swedish cult director Ruben Ostlund, who won the 2017 Palme d’Or for “The Square”, is back with “Triangle of Sadness”.

He is joined by two other films from rising stars with immigrant backgrounds: “Boy from Heaven”, by Sweden’s Tarik Saleh and Danish-Iranian Ali Abbasi’s “Holy Spider.”

Scandinavian films have been a fixture at the Cannes Film Festival over the years.

Denmark’s Bille August is one of a handful to win the Palme d’Or twice and Von Trier won the top prize in 2000 for “Dancer in the Dark,” while Bergman was the first-ever recipient of an honorary Palme in 1997 for his body of work.

“It’s entertainment, but (the goal is) also to challenge the audience. The director has the freedom to explore whatever his artistic vision is,” he told AFP.

Abbasi, 40, is making his second appearance at Cannes, after winning the newcomer’s Un Certain Regard section in 2018 with “Border,” an eccentric troll-fantasy film about a border guard.

His new film “Holy Spider” is the gritty story of a serial killer “cleansing” the Iranian holy city of Mashhad of street prostitutes.

“You can’t pigeonhole him. When you think you have him, he’s a shapeshifter and does something else,” his producer Jacob Jarek told AFP.

Abbasi recently finished filming episodes for the upcoming post-apocalyptic HBO series “The Last of Us,” based on a video game. That versatility defines others from his generation, said Jarek.

The previous wave of Danish filmmakers, such as von Trier and Thomas Vinterberg, won international acclaim with the Dogme movement, which set strict filmmaking rules aimed at ensuring realism in their films.

But the new generation is “more willing to work with genre, to mix genres: to do comedy and lighter stuff mixed with dark stuff,” said Jarek.

Both Abbasi’s and Saleh’s films draw heavily on their immigrant backgrounds.

Abbasi left Tehran for Sweden in 2002, while Saleh was born in Stockholm to a Swedish mother and Egyptian father.

Saleh’s background was essential to making “Boy from Heaven,” he told AFP.

“I think there’s a reason a lot of directors, historically, have immigrant backgrounds, like (Francis Ford) Coppola and Milos Forman,” the 50-year-old said.

“You’re positioned on the inside and outside of something. In a way, that’s the director’s role… to see both the similarities and the differences.”

“Boy from Heaven” is a dark thriller set in Cairo that follows a poor boy granted a scholarship to the prestigious Al-Azhar University, who finds himself drawn into a brutal power struggle between Egypt’s religious and political elite.

Being an outsider was crucial, Saleh said.

“No one has ever gone into (Al-Azhar University) with a camera before. (An Egyptian filmmaker) would go to prison if they did,” he told AFP.

A former graffiti artist, Saleh grew up with a filmmaker father and worked in his film studio before attending art school in Alexandria.

In addition to directing episodes of “Westworld” and “Ray Donovan,” his 2017 film “The Nile Hilton Incident,” also set in Cairo, won the Sundance Grand Jury Prize.

Meanwhile, Ostlund, the doyen of the trio with six features under his belt, is bringing his first English-language film to Cannes.

“Triangle of Sadness” is a satire about passengers on a luxury cruise who end up stranded on a deserted island, lampooning the fashion world and ultra-rich, with a scathing criticism of society’s focus on beauty. JB