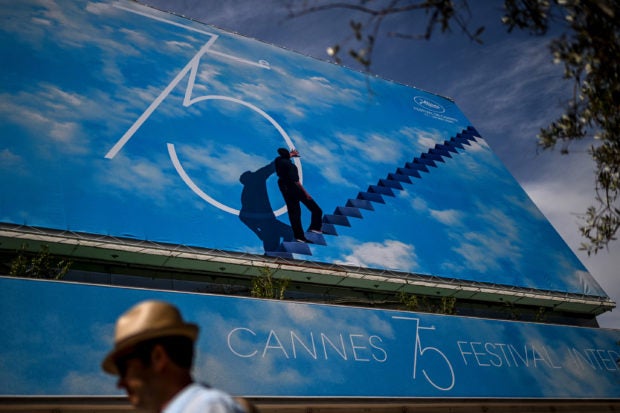 A man wearing a hat passes by the official poster of the 75th Cannes Film Festival at the Palais des Festivals main entrance in Cannes, southeastern France, on May 16, 2022. Cannes Film festival will take place from May 17 to May 28. Image: AFP/Patricia de Melo Moreira

The last touches were being laid in Cannes on Monday for the 75th anniversary edition of the world’s leading film festival, promising a return to its full glitz.

Dangling from ropes above the fabled Palais des Festivals, workers were unfurling the huge poster for the Cannes Film Festival’s golden jubilee, which this year features an image from “The Truman Show.”

Some 35,000 film professionals are expected between May 17 and 28, hoping for a return to form for cinema’s most glamorous event after two years in which COVID-19 dampened the mood.

“We are ready. The town hall has just redone everything, the whole place, so we hope it will go well,” said Jeremie Tripet, manager of L’Avenue, a bistro just off the main drag known as La Croisette.

After Cannes was entirely cancelled in 2020 and held under strict health protocols in 2021, most of the world is expected to be represented at this year’s event, which includes a large industry marketplace alongside the festival.

One major exception is the absence of Russians, due to the impact of sanctions over the war in Ukraine and a ruling from the organizers that state-linked delegates are not welcome.

China is also expected to have a limited presence due to its continuing COVID-19 restrictions.

But otherwise the festival is keen to put the pandemic in the past, with no mandatory masks or health passes this year, and no restrictions to partying.

The easing of pandemic restrictions also means Hollywood will be back in full force at Cannes.

The much-delayed blockbuster sequel “Top Gun: Maverick” gets its European premiere on Wednesday, with Tom Cruise appearing on the Croisette for the first time in 30 years.

One of the first stars to walk the red carpet will be Forest Whitaker — the Oscar-winning star of “The Last King of Scotland,” “Godfather of Harlem” and much more — who is picking up the honorary Palme d’Or award at the opening ceremony on Tuesday.

Then film fans can get stuck into the usual feast of new releases and competition entries, braving the festival’s famously opinionated crowds, who are never shy about cheering and booing during screenings.

There’s a lot of excitement around the Elvis Presley biopic from Australia’s Baz Luhrmann, hoping to recreate the buzz he generated when he brought the can-can to Cannes with “Moulin Rouge!” 20 years ago.

There are 21 films in the race for the Palme d’Or, including the latest body-horror fable from David Cronenberg, “Crimes of the Future” starring Lea Seydoux and Kristen Stewart.

The Canadian director told IndieWire it is likely to cause walkouts “within the first five minutes.”

There are only five women directors in the competition, hoping to follow the success of last year’s winner, “Titane,” which made Julie Ducournau only the second female to win the Palme.

The war in Ukraine will be an inevitable talking point.

The final film by Lithuanian director Mantas Kvedaravicius, who was killed by Russian forces in Ukraine last month, will get a special screening.

He was shooting a follow-up to his celebrated documentary “Mariupolis,” about the conflict in Ukraine’s Donbas region, when he was reportedly captured and killed.

Ukraine’s beleaguered filmmakers will get a special day at the industry marketplace and one of its most promising directors, Sergei Loznitsa, will show “The Natural History of Destruction,” about the bombing of German cities in World War II.

The main competition also includes exiled Russian Kirill Serebrennikov, who was unable to attend for his two previous nominations due to a politically charged conviction for embezzlement back home. JB