Coleen Garcia on waiting for hours due to broken VCM: 'Waiting is one thing, being kept in the dark is another' | Inquirer Entertainment
Close
menu
search

Coleen Garcia on waiting for hours due to broken VCM: ‘Waiting is one thing, being kept in the dark is another’ 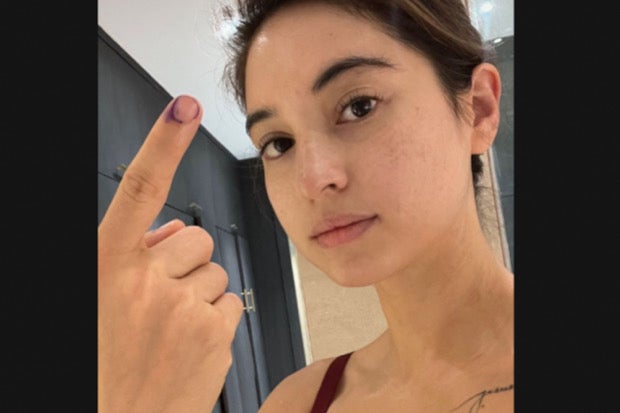 Coleen Garcia expressed disappointment over her first voting experience after she waited beyond voting hours due to malfunctioning vote counting machines (VCM).

The actress narrated what happened while showing a photo of herself and her index finger marked with indelible ink, signifying she voted, via her Instagram Stories yesterday, May 10.

Garcia went to her voting precinct early in the morning, only to be plagued with a broken VCM. She then left and came back in the afternoon, but she had to wait again because the machine malfunctioned the whole day.

“I wish I looked fresh in my selfie. I wish I could also say it took me 5 [to] 10 [minutes] to vote but [to be honest], yesterday was [sh*t],” she said. “The frustrating part is we rarely got updates. Kawawa ‘yung mga nagbabantay (The voting officials were pitiful) [because] even they were left in the dark. They were told at 12 noon that the SD card was being brought in from Laguna, then silence. No one was replying to them for hours [and] they were stressed [as f*ck].”

Garcia talked about how the voting officials had to take in the voters’ dismay even when they also had no control of what was happening. Garcia stated that she stayed as long as she could, even after finding out that her cat died while she was waiting in line.

“People were slowly giving up, leaving the venue in tears [and] frustration, [and] how can you blame them?” she stated. “It’s like being worn down. Waiting is one thing, but being kept in the dark is another.”

Although she deemed it “not ideal,” Garcia eventually decided to vote and leave her ballot as she needed to go home to her baby son Amari to breastfeed him.

“I can’t explain the feeling but it was so heavy. I left with my head hanging low, feeling not only frustrated but also defeated [and] that’s just me. I could only imagine all the others who stayed until God knows what time,” she told fans.

The actress spoke about how she was moved by other voters’ dedication and “stood their ground” despite the inconveniences. She then urged the public to continue fighting and praying for change amid the current circumstances.

“All I can say now is, yes, we are slowly waking up. Yes, we are slowly trying to reclaim our power [and] restore peace [and] justice but sometimes it feels like there are things far bigger than us that we can’t just control,” she stated.

“It may not take one day, one year, one election or even one presidency but I urge you all to continue to fight for us,” she added. “It will take continuous effort, continuous change and we will get there.” 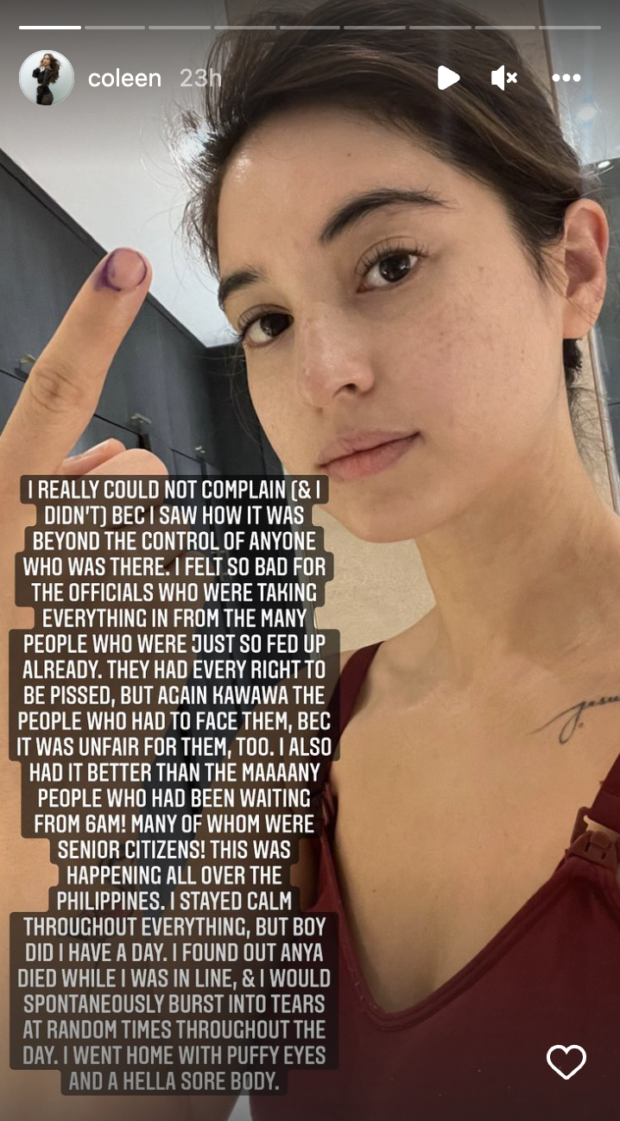 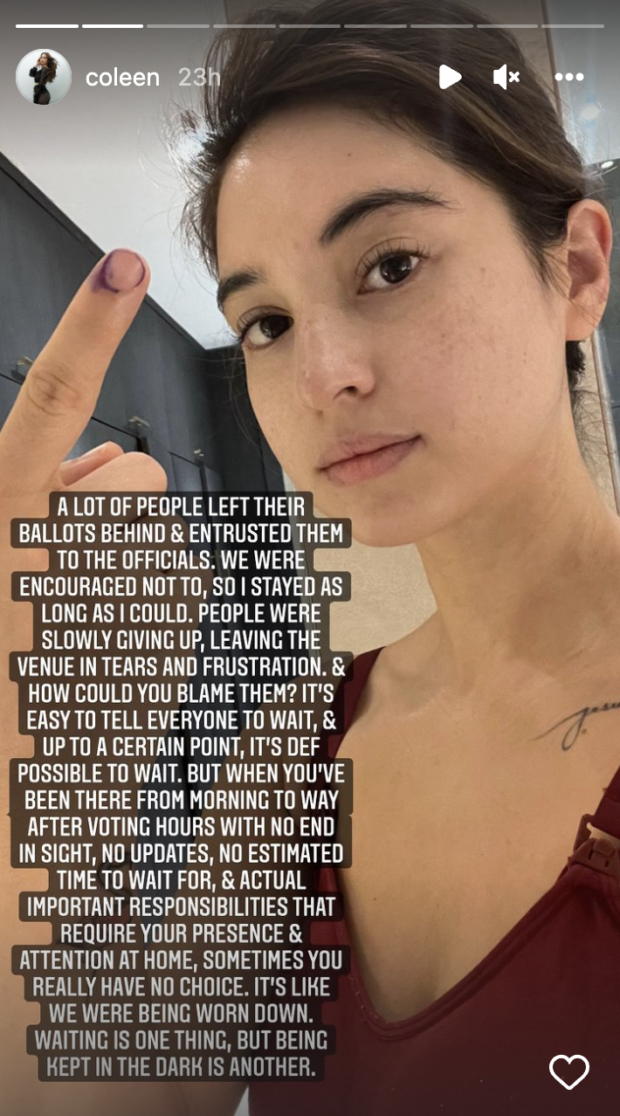 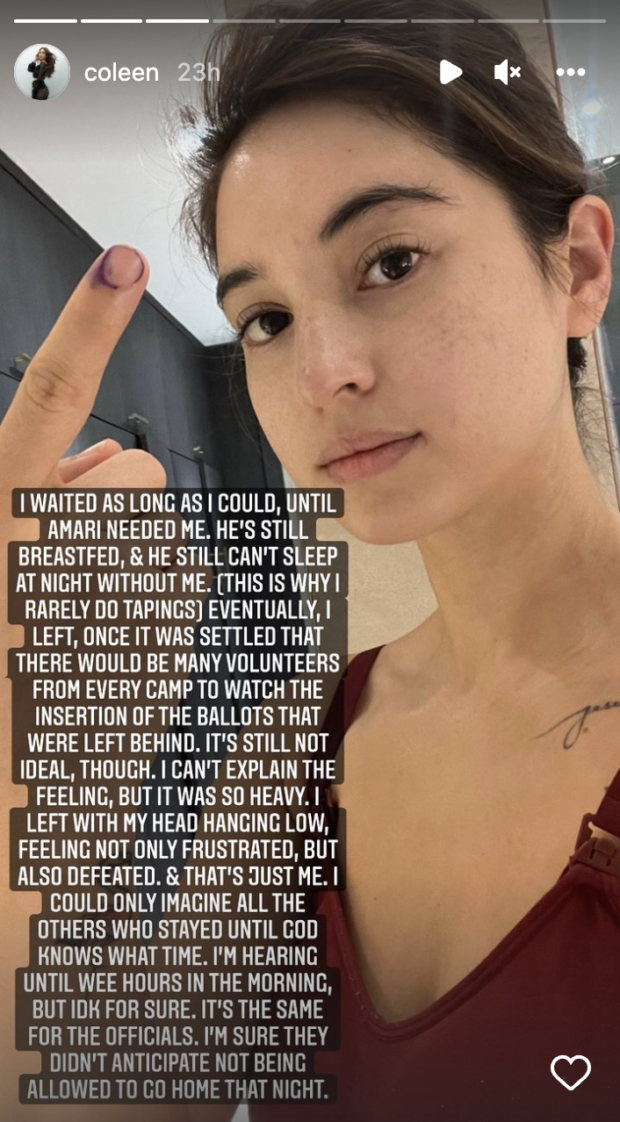 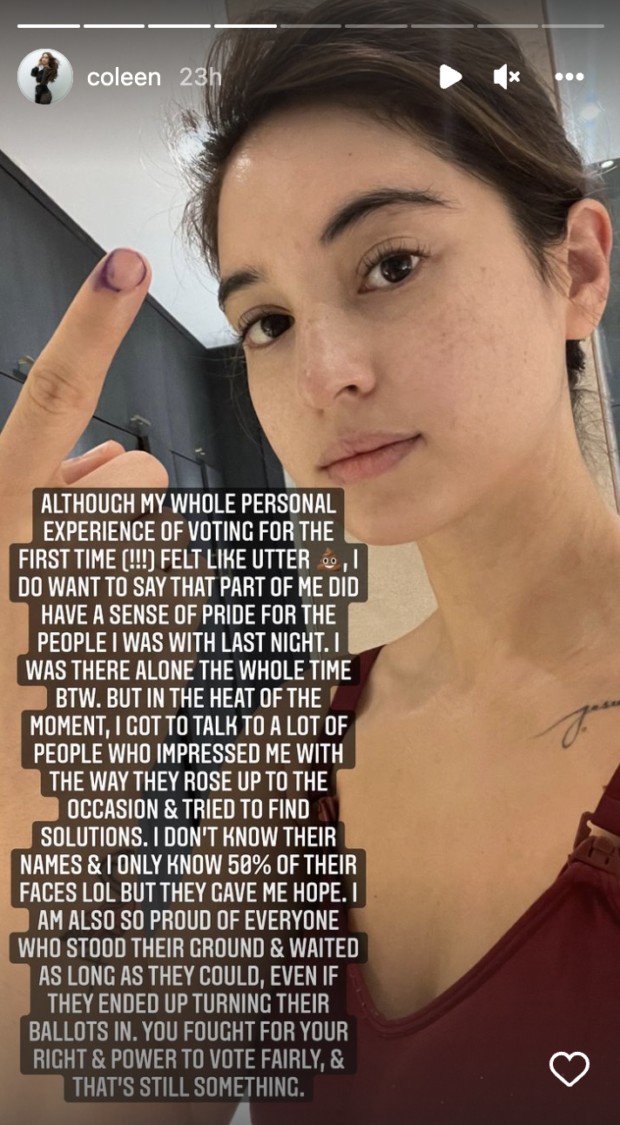 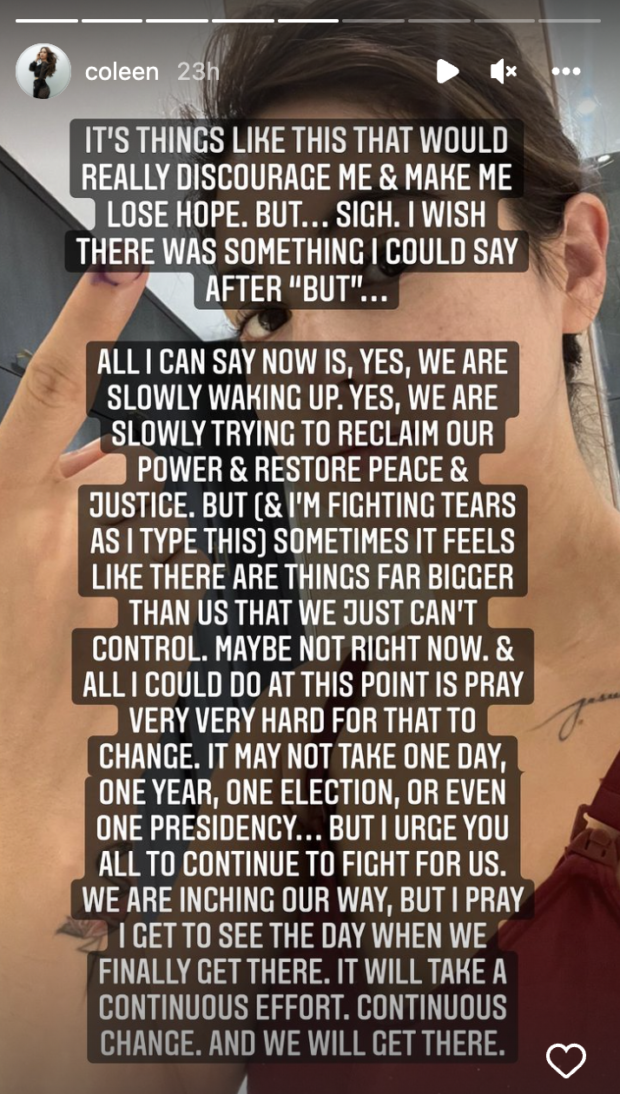 During the elections, there have been multiple reports about malfunctioning vote counting machines. The Commission on Elections (Comelec) claimed that these issues were already resolved within the day. JB

Read Next
Mario Batali acquitted of sexually assaulting woman in Boston
EDITORS' PICK
Geek out at TOYCON 2022 powered by Smart Signature
UK’s Boris Johnson will resign, BBC reports
High-risk pregnancy: Reducing your risk is in your hands
House energy committee chair Arroyo bats for cheap electricity
High inflation: Your P1 is now worth only 87 centavos
Unemployment rate up to 6% in May
MOST READ
Suspect in grisly killing of missing woman in Bulacan arrested
Hong Kong suspends flight bans as it eases COVID-19 rules
Bongbong Marcos’ first order: Abolish PACC, Office of Cabinet Secretary
Kim Atienza’s daughter flaunts bikini body in response to critics of her ‘revealing photos’
Don't miss out on the latest news and information.