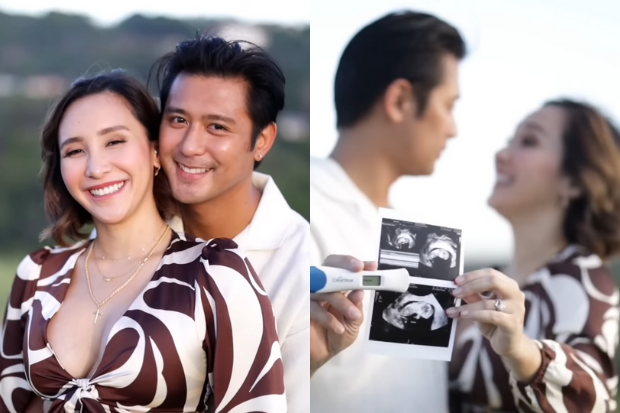 Rocco Nacino has revealed that he and his wife, volleyball player Melissa Gohing, are now expecting their first baby after months of her trying to get pregnant.

Nacino and Gohing revealed the good news via their YouTube channel “Life with the Nacinos” yesterday, May 6.

The couple had been praying to have a baby for months amid the athlete’s having the hormonal disorder polycystic ovary syndrome (PCOS). Fortunately, Gohing’s doctor gave her medication to help her become fertile and have a baby.

“We’ve been praying for this for how many months. Kasi nagkaroon ako ng PCOS […] matagal na kaming nagta-try pero hindi kami nakakabuo,” Gohing told fans. (Since I have PCOS… we have been trying for a while but I was not getting pregnant.)

Nacino and Gohing also showed the moment they found out that they are going to be parents. Gohing took a digital pregnancy test while Nacino, who was on set for a taping, talked to her via video call.

After the test showed the word “pregnant,” the pair can be seen crying as they expressed their happiness and excitement over finally having their first child.

Aside from the vlog, Nacino also announced that he is going to be a dad by showing himself and Gohing with the sonogram of their baby on his Instagram page yesterday.

“Because God is kind to those who wait and pray,” he said.

The couple was congratulated by fellow celebrities Dingdong Dantes, Winwyn Marquez, Carla Abellana, Drew Arellano and Ryan Eigenmann, among others.

Nacino and Gohing have been together since 2017, after the actor was invited to watch one of Gohing’s volleyball games. They tied the knot in January 2021.  /ra

Read Next
Julia Barretto to explore tourist spots in new travel series ‘Juju on the Go’
EDITORS' PICK
High inflation: Your P1 is now worth only 87 centavos
Geek out at TOYCON 2022 powered by Smart Signature
Unemployment rate up to 6% in May
UK’s Boris Johnson will resign, BBC reports
High-risk pregnancy: Reducing your risk is in your hands
House energy committee chair Arroyo bats for cheap electricity
MOST READ
Suspect in grisly killing of missing woman in Bulacan arrested
Kim Atienza’s daughter flaunts bikini body in response to critics of her ‘revealing photos’
Cop slain in Isabela ambush
FDA probes popular Filipino noodle brand for ‘high level of ethylene oxide’
Don't miss out on the latest news and information.