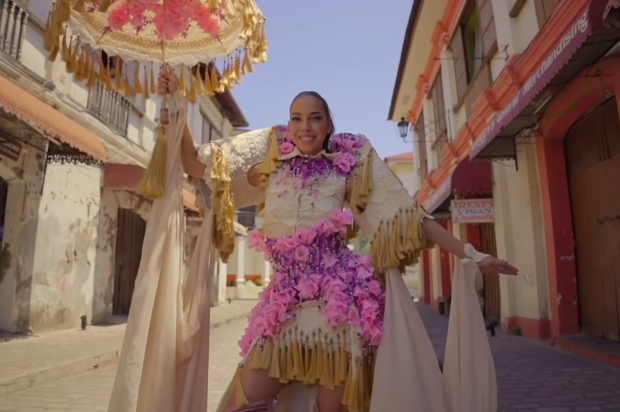 Que explained his side of the issue after Miss Lapu-Lapu City’s mother, Mariz Chiesa, claimed that her daughter was “scammed” by the designer, Origin Model Management and its managing director Sven Chua, as per a Facebook post last Saturday, April 30.

“Sashi didn’t even make it to top 16 [because] we got scammed by Sven Chua the Origin Management Manager and claimed to be the AP (accredited partner) for Lapu-Lapu City,” she said.

Mariz stated that the price for Sashi’s national costume went up from P20,000 to P40,000, and alleged that Que and the team had “threatened” to report Sashi to the Miss Universe Philippines (MUPH) organization.

Que clarified the issue via Facebook last Sunday, May 1. According to the designer, he was tapped to make designs for both Miss Cebu City and Miss Lapu-Lapu City.

“Miss Cebu City, Chantal Schmidt, has settled all her payables to the team way before she left for the final stretch of the competition in Manila,” Que said.

“In contrast [Miss Lapu-Lapu] City, despite the inability to settle her balance before flying out to Manila, my team and I still poured our hearts and soul into making sure we finish the costume, and out of my personal empathy and willingness to understand her situation, I still made sure to send the costume to her. She was able to use it for the [national costume] competition held in Vigan,” the designer added.

Que recounted communicating with Sashi, though sometimes feeling “ignored” when asking about the remaining payments for the national costume.

“It came to a point where I really had to put my foot down. I informed [Miss Lapu-Lapu] City that if she doesn’t respond to my messages I will be compelled to reach out to the Miss Universe Organization to ask for their assistance in the collection of both the balance and my costume,” Que stated.

Que then stressed that pageants are “still a business” and peers in the industry can vouch for his team’s reputation.

“At the end of the day, pageants are still a business. You cannot avail of services pro bono. We are already in a time where creatives like myself and my colleagues need to be compensated for our services and hard work,” Que told Sashi. “It’s 2022, you cannot expect to get things for free these days, especially in a time of crisis.”

Que then clarified that the P20,000 price tag stated by Mariz was only an estimate of the costume and not the final cost including shipping, as seen on his Instagram page, also last Sunday.

Sashi insisted that she had paid for the costume, adding that Que was “bullying” her into giving more money, as per her Facebook post last Sunday.

“I know how to respect professionals. Do you really think I won’t pay a designer for a gown?” she asked. “I paid. He just wants more. And is bullying me for it.”

Meanwhile, Chua asked Mariz and Sashi to pay Que. He also said the pageant candidate’s mother would be hearing from his legal counsel, as per a Facebook post last Saturday.