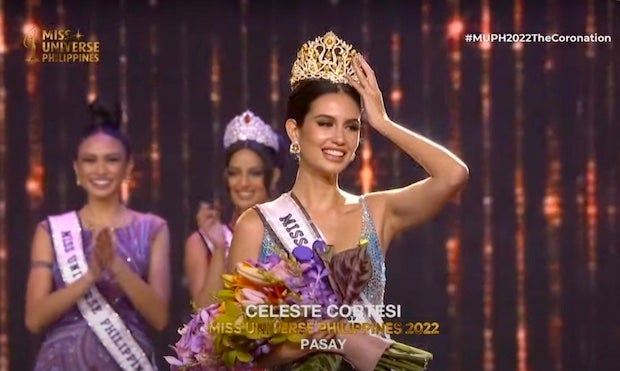 MANILA, Philippines — Celeste Cortesi is now one step closer to a global crown after capturing the Miss Universe Philippines title in ceremonies staged at the Mall of Asia Arena in Pasay City on Saturday, April 30.

The delegate from Pasay bested 31 other aspirants to inherit the crown from Beatrice Luigi Gomez, who finished in the Top 5 in the 70th Miss Universe Pageant in Israel in December. Cortesi now has the unenviable task of sustaining the Philippines’ impressive 12-year streak in the global pageant’s semifinal round which started in 2010 with Venus Raj who eventually finished fifth.

This is Cortesi’s second national title. In 2018, she was crowned Miss Philippines Earth and finished in the Top 8 of the global competition held in the Philippines.

Reigning Miss Universe Harnaaz Sandhu from India helped in choosing the new national queen as one of the judges in the coronation night, as well as in the preliminary competition and closed-door interview round held earlier.

Settling for the first runner-up spot was Annae MacDonnell from Misamis Oriental while Katrina Llegado from Taguig was proclaimed second runner-up.

This is the first Miss Universe Philippines coronation night that was open to the general public. The two previous editions were staged under stricter COVID-19 protocols.

The inaugural event was held in Baguio in 2020 where the delegates, the entire production team, the organizing committee, as well as the guests holed up in a pandemic bubble.

Last year, multiple locations hosted different stages of the competition before settling in Bohol for the finals where a controlled group of spectators was allowed.

The Miss Universe Philippines organization pulled out all the stops for the pageant’s third edition to make up for the two earlier editions mounted in smaller venues. Filipino Miss Universe winner Pia Wurtzbach and her successors Iris Mittenaere from France and Demi-Leigh Tebow from South Africa hosted the ceremonies.

The 2022 Miss Universe Philippines coronation night was streamed real-time worldwide on the ABS-CBN Entertainment YouTube channel and the iWant TFC platform. It will have a free TV telecast in the Philippines on GMA on May 1 at 9 a.m.